Elections have been set in Great Britain for May 6, pitting the Labour Party (headed by Obama-wannabe Prime Minister Gordon Brown) against the Conservative Party (“Tories”) (headed by David Cameron).

While all politics is local, and the election could swing either way based on personalities and non-economic issues, the Tories are campaigning on a platform of tax cuts, opposition to proposed national insurance tax increases on businesses, and greater economic freedom.

As of now, the Tories are favored to win, as reflected in this map by the Times of London (note: Conservatives are in Blue, not Red as in the U.S., and there are more than two parties): 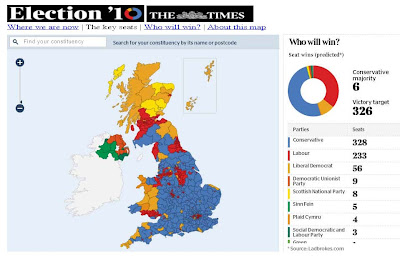 Labour's headed for a deserved beating, but the Conservatives are hardly better. Under Cameron, they've jettisoned the Thatcher heritage and become Labour-Lite. I can't see a Conservative win making much of a real difference (just look at their "green" policies, for example), nor do I see a small-government movement having much of an effect in the near future. (Though I note the UK saw it's first "tea party" recently.)

The Tories are marginally better than Labour, but they're at least as pro-European, pro-big government, and anti-American as Labour.

There is no party in Britain today who's really America's friend.

I agree with pubsecrets. The Tories seem even worse than the Republicans when it comes to presenting a strong vision for the country that differs from that of Labour/Dems.

The conservative party in Britain is, as commentors above have noted, merely a light version of Labour. Cameron is a political opportunist of the worst sort who, when he himself renniged on the promise of a referendum on transferring sovereignty to the EU, should have been subject to a challenge for the party leadership. In the U.S., republicans lost their base when they jettisoned fiscal responsiblity. In the UK, Labour has rebounded from its utter nadir following the expenses scandal. Their rebound can be trace to the day Cameron announced he would not allow a referendum on transferring sovereignty to the EU, thus losing a portion what should have been his base. I would not be surprised at all to see the Tories make nowhere near the expected gains while UKIP and the BNP do better than projected.

Britain suffers today from a real crisis. There is no major party that represents the interests of the rank and file, nor, since there is no election for PM, can the rank and file have a critical impact on the direction of their government. Add on to that a situation in which there is no Constitution and virtually any government the Brits are likely to see will be, to some varying degree, totalitarian.

Time to say bye bye to Britain. They are a drain on our finances. They aren't worth one fourth the effort we put into keeping them as allies. They are opportunists who have been using us since the days of WW I. The sooner we wake up and realize that, the sooner we can move on.

Sadly, if the British people had a government that actually represented them it wouldn't be that way. But unfortunately, the Brits are between Charybdis and Scylla. They've been hijacked by an elite and taken down the same road we're headed before long.

UKIP IS A FINE PARTY.

I THINK THAT ITALY AND GERMANY HAVE MAINTAINED THEIR RIGHTWARD PROGRESS. AS HAS DENMARK.

HOLLAND IS ABOUT TO.

SO THE IDEA THAT EUROPEANS ARE THRILLED WITH LEFTISM IS FALSE.

SOCIALISM IS MORE ENTRENCHED THERE – AND THE MSM WORSE SO THEY HAVE A HARDER ROW TO HOE THAN WE DO (FOR THE TIME BEING, BUT IF WE DON'T DETHRONE OBAMA, IT WILL BECOME MORE ENTRENCHED HERE TOO!).

Pagan Temple – I would not say the Brits were totally opportunists. I think you have to go back to the time of WWII. There was a lot of linkage between Anglo-Saxons in this country and the old sod. The Revolution was a family fight. The profile of our population no longer makes this possible and really Britain isn't the Britain of WW II. It will be interesting to follow the Muslim vote in this election. Mu main concern about Britain is that we have relied on them too heavily when they are going bankrupt trying to pay for an updated arsenal. See Janes

I too have heard that the Tories are really Labour-lite. Kind of like our RINOs.

Why is this so important. Because thanks to our RINOS here, we had much the same thing with Bush for 8 years. That's why I'm always screaming to vote Conservative. Be done with the Democrats and their recurring RINO problem.

You're probably right, that's why I made it a point to stress I was talking about the government and elites, not Brit citizens in general. We've been laboring under the illusion that Europeans in general actually practice representative democracy.

Pagan Temple – I just re-read your initial post – last paragraph and you did indeed make that distinction. Sorry. Late night comprehension disorder. You have made a very important distinction.