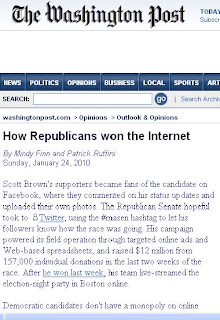 Talk about dominance of the Internet.

Patrick Ruffini has an article in The Washington Post, which relates how Republicans won the internet in the Scott Brown election.

Putting my shock aside, for the moment, there is something else worth noting.

As of noon today, the article has been re-tweeted over 200 times.

And the article does not come out until tomorrow.

Now that’s dominance of the internet.

Conservatives dominate the social media. Liberals are wailing and gnashing their teeth. But the libs are learning. Eventually they will catch up.

In the meantime, we need to accurately acknowledge who has been responsible for winning recent online battles.

Social media are an important tool, but they won't get the GOP very far if Republicans don't embrace and hold on to conservative principles.

Many on the right are reverting to the old notion that "it's all about winning votes on floor." They couldn't be more wrong.

The GOP is going to fail miserably if they misuse the power of the social media by taking conservatives' money and resources only to abandon conservative principles when it comes time to take the reins of power.

I teach this in class, by the way. And the textbook discussions of "The Mass Media Today" just never do justice to what's happening in politics in the social networking age.

The best way to evaluate a candidate is to see them in person and watch both when they are "on" and when they are interacting with staff. But the next best way is to watch videos of campaign appearances. Not those in large venues, but the smaller, casual events. This really gives one a clue about whether this is someone one wants to support with time, money and emotion. That's the beauty of New Media.

With hats off to Glenn Reynolds, our Army of Davids is disintermediating the old-boy networks via the Internet and laying waste to the enemies of freedom. Twitter at will!

Here's my take on your take on guys and gals sitting in their living rooms in their pajamas writing what they think: