I posted yesterday about a disgusting mailer used by the Massachusetts Democratic Party to allege that Scott Brown wants rape victims turned away from hospitals.

As I explained, the allegation is false, twists out of all reality the legislation Brown proposed on the “morning after pill,” and ignores that Martha Coakley herself supports the Senate health care bill which has a religious exemption against providing abortion related services or referrals, even in the case of rape.

Now Greg Sargent at Plum Line and Ben Smith at Politico have called the Coakley campaign out on this piece of trash.

Of course, Martha Coakley is silent on this abuse of the rape issue by her close associates at the Mass Dem Party.

I’m sure, once Coakley gets around to it, she’ll say “I’m shocked.” Sometime after Tuesday. 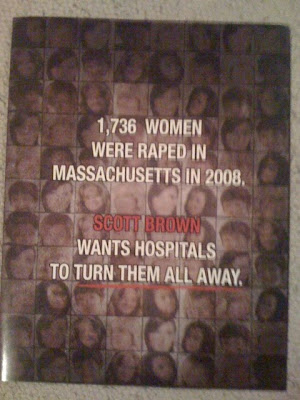 Update: Here’s what the decidedly liberal Taylor Marsh has to say about this mailing, Karl Rove on Steroids:

I am disgusted and I thought they couldn’t top the World Trade Center gaffe. Into this Pres. Obama will walk tomorrow….Now, I love a good political fight, all things fair and all, but someone should tell Democrats that you draw the line on using rape victims in a mailer. Or maybe that’s just my delicate sensibilities. If this is what is being sent out by Democrats in Massachusetts to obviously help Martha Coakley bring affluent and suburban women, regardless of parties, to the polls on Tuesday. She’s finished, whether she wins or not.Let’s just hope the White House had nothing to do with this, not even giving a nod, though I wouldn’t put anything past David Axelrod.

And now The Washington Post has a story about Brown filing a defamation claim under a Massachusetts law prohibiting false statements about a political candidate, based on the clearly false mailing (h/t Gateway Pundit):

A section of the Massachusetts General Laws prohibits false statements against political candidates that are designed or tend “to aid or to injure or defeat such candidate,” with a penalty of to $1,000 fine and up to six months in prison.

So who will prosecute this? Martha Coakley, the Attorney General? Regardless, it looks like Marsh was right and Obama is walking into this, not that the story has gone national.
——————————————–
Related Posts:
Brown Massacres Coakley Online
Coakley Ignorant of Religious Exemption in Senate Health Care Bill
When Martha Dissed Teddy
Follow me on Twitter and Facebook

Candidates of either party who employ such dishonest, misleading rhetoric should be significantly fined.

She's being advised by the best and brightest of the national Democratic Party, and they put their heads together to create an ad with incredulous content such as that?

Anybody who receives that mailer should be offended. The Democrats think you are retarded.

1,736 women were raped in Massachusetts in 2008. Martha Coakley is thrilled that none of them was carrying a firearm with which to defend herself.

Ther, fixed it for them.

Unfortunately for Coakley, this will remind people of her outrageous stupidity regarding Catholics in emergency rooms. There's very little that she hasn't beshite.

Realistically speaking, though, most 23-month-olds who've been raped with a hot curling iron don't require the morning after pill.

How many rapists have Coakley set free: no trials, no cash bonds?

And you don't need an ER to get the morning-after pill–it is available without prescription if you're over 18. If you can't or don't want to pay retail, you can obtain them free or on a sliding scale at not-church-affiliated "women's crisis centers" or your school. Granted, you have to have make a little bit of effort on your own behalf…maybe that's the feminist objection.

Well, now that Kennedy is gone that number should be a lot lower

"Granted, you have to make a little bit of effort on your own behalf…"

That's the problem right there; our dear Martha (sarc.) is on record, saying (near quote) 'We generally discourage self-help.'

Here's the rape link (though it doesn't mention the severe burns the baby sustained):

Every time I see one of those "Proud to be a Democrat" bumper stickers I think of stories like this.

And since I'm speaking of bumper stickers…I recall one clever one stating that "Republicans vote Voldemort". After watching The Chamber of Secrets with the kids last night I have no doubt that Democrats vote Gilderoy Lockhart.

This is what a desperate Pol does…I've a friend who is in Boston who tells me that having worked in political campaigns off and on for the past 50 years, he's never seen a campaign come apart like Coakley's is right now. I'm going to post excertps of his latest email on my blog in a few moments.

It hasn't gone national yet. It will. People are tweeting and blogging it and are pretty upset on the ground in Mass. She's beyond belief despicable and hateful. I can't believe that ANYONE supports her at this point. Even libbies can't think this is a good candidate for anything, even the school board.

I'd say it has gone national. And beyond.
On the internet? Forget borders. There aren't any.

I'm curious about the pictures of the rape victims used in the mailer. Did the Mass Dem Party obtain permission from all those women to use their pictures in that manner? Where did they get the pictures? I'd be pretty po'd if my picture were used like that, in a misleading campaign ad.

Truth is a defense. All Republicans hate women, and Brown is Republican. Ergo it is the truth, and thus no crime. Move on, people.

Back to the story of the baby. I learned a bit from the piece at Brietbart regarding this case. The family lawyer had handled another case involving a male child and was called in by the parents. Coakley did nothing to move a prosecution because the man's father was one of her campaign donors. So, the lawyer then made the decision that the only way to get something done was to challenge Coakley. She then accused him of using the case for his own ambitions!!

On top of that I saw a response from Coakley claiming that the mother was to blame for the injuries.

This is on top of what she did in the Fells Acres Case – her role was to prevent Tookie from being released from prison even though the man is innocent of any wrong doing.

I did a bit of reading on the case, and this should have been thrown out. There is no way that something so tainted should have been heard in a court of law with a jury. On top of that the judge acted in an unconstitutional manner in her handling of the trial of Tookie. Neither the judge nor Coakley would budge with regard to the case. There was no child molestation at the centre. The manner in which the prosecution case was obtained was extremely tainted. They used a "nurse" to badger the children over and over again until they agreed to all sorts of silly claims.

Anyone who has ever looked into false memory syndrome should study this case, including the after effect upon these innocent children, who were led to believe that all manner of things happened, even when there was no evidence.

From the justice point of view the case should be studied because of the manner in which the trials were conducted such that the children had their backs to the accusers, but more important is that the evidence should not have been admissible in the first place.

These nincompoops who complain about the torture of waterboarding need to learn a thing or two about the techniques that were used to brainwash these childrens, and the devastating results for them.

I should point out that I found one comment at the Boston Globe that went way too far where the accusation is concerned. As a result of this flyer, or perhaps because the person was briefed by the Coakley team, the person implied that the rape victims were being turned away from getting any aid… nothing to do with the morning after pill according to that commenter.

If this was the result of that particular campaign then it is truly disgusting because it is so very misleading. If it was approved by the Coakley campaign, and these trolls are paid operatives… then it is far more damaging to have these trolls going to blogs and media sites leaving such despicable messages.

This Martha Coakley is an embarrassment to our State. Lies,and all! Please folks, vote for Scott Brown on Tuesday. At least he is a grown up, and who knows? Maybe he can get us some of those tax breaks and jobs we need, right quick and in a hurry.

What would Coakley say about Teddy?

Linked to at:
Stacy McCain In Bosstown V

Don't the voters of Massachusetts bear at least some responsibility for Ms. Coakley? They kept sending Kennedys to Washington, they let the pedophiles in the clergy go on for years, at what level does the electorate's cupidity and depravity merit disapproval?