Martha Coakley’s campaign is touting the fact that it has raised $5.2 million so far, almost four times as much as Scott Brown, including $1 million in the past six weeks (compared to $700k for Brown).

Coakley, however, spent heavily in the primary, and started the special election campaign with only $500k in the bank. That number likely reflects that some of the $1 million raised in the last 6 weeks by Coakley already had been spent by the time of the December 8 primary. We do not know how much of Coakley’s $1 million came in after the primary; my guess is that a substantial portion came in in the 2-3 weeks prior to the primary (note to Coakley campaign, e-mail me with your post-primary fundraising numbers, if you dispute this).

By comparison, Brown started the special election with $300k in the bank; little if any of the $700k raised during the past six weeks by Brown likely was spend on the primary, and since Brown’s fundraising took off only recently, the $700k likely is on top of the $300k in the bank.

Looking at the bigger picture, Coakley probably has more available funds, but not by as much as one would think. The $5.2 million number being hyped by Coakley has nothing to do with anything; it’s like the homeowner who brags how much her home used to be worth.

Equally important, Brown has the momentum in the online community, where he is gaining strength through an effective internet strategy. Much like Barack Obama did.

And with Mitt Romney just entering the fundraising fray for Brown, and an internet “money bomb” scheduled for January 11, Brown likely will have sufficient funds to challenge Coakley on the defining issue of the campaign, the Senate health bill.

Coakley, who is Attorney General and has the unions and Democratic machine behind her, should be much farther ahead at this point in cash in the bank. This tweet yesterday by Coakley suggests she is desperate not only for money, but also for token signs of support which would allow her to claim campaign momentum: 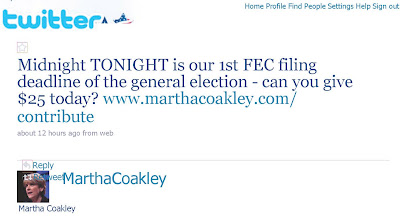 It is not surprising that Coakley has lost momentum. Coakley alienated her base when she broke her primary campaign promise not to support any health care legislation which contained restrictions on abortion. Coakley used that promise as a major fundraising tool, but after the primary announced that she would support the Senate bill which contains restrictions on abortion.

During the primary campaign, Coakley said she would not have supported the House health care bill because of provisions designed to prevent federal funding of abortions that abortion rights advocates said went too far. Her stand was a major point of debate during the campaign; several of her opponents criticized her for being willing to sink the health care bill over a single issue, but she insisted that there were some things on which she would not compromise.

Yet Coakley did compromise this uncompromisable principle immediately after the primary.

Coakley’s base feels betrayed, as reflected in comments online by prominent left-wing blogger TalkLeft (emphasis mine):

Can’t say I didn’t warn you about Martha Coakley. The latest: a Bait and switch.

During her campaign to replace Sen. Ted Kennedy, she said she wouldn’t support a bill with restrictions on abortion.

Today, she announced her support for the health care bill with its restrictions on abortion funding….

How much did she mislead?

Coakley used her stark position on abortion rights to appeal to supporters for donations; in an e-mail, she declared her decision to take her position “a defining moment’’ in her campaign….

Martha Coakley is not someone we need in the U.S. Senate. She certainly is no Ted Kennedy. (More here.)

The left-wing blogosphere should be rallying around Coakley, but it is not. The fundraising machine which generated several million dollars for Coakley during the primary is largely silent.

Having lost the abortion wedge issue (important in Massachusetts), what does Coakley have left to fire up the base? Not much, considering that the left-wing opposes the Senate health care bill which Coakley supports.

How many of the people who donated and voted during the primary based on Coakley’s abortion promise will now close their wallets and stay home? If the fundraising numbers for the past several weeks are any indication, there are many such people.

The abortion issue was Coakley’s “read my lips moment” for her base, and there is no coming back from violating that promise.

Coakley’s middling fundraising reflects an alienated pro-choice base. Just wait until union members, Coakley’s other base, find out that the Senate health bill supported by Coakley will raise their taxes, as recently pointed out by Bob Herbert in the NY Times.

Coakley’s campaign is hyping the stale and irrelevant primary fundraising numbers, and downplaying the tepid recent fundraising, to hide the fact that Coakley has lost momentum and is losing her base. Begging for $25 donations to create the appearance of momentum is not a good sign.

In a special election in the middle of January, Scott Brown’s highly motivated base combined with independent voters who are sick and tired of Washington politics as usual, may be enough to push Brown over the top in what would be the biggest wake-up call in recent history.

Update 1/3/2010: Interesting analysis from Red Mass Group which confirms what I suspected – a large portion of Coakley’s $1 million came pre-primary:

In news stories, about the fundraising numbers over the last six weeks it has been widely quoted that Martha Coakley raised $1,000,000 since the pre-primary report. A quarter of what she had raised previously. Using an analysis of the 48 hour contribution reports available at the FEC it becomes apparent that Coakley raised the bulk of that $1,000,000 pre-primary.

These numbers only account for those contributions at or above the $1000 threshold. Meaning there were other contributions for less than those amounts. It is fair hypothesis that up to half of that $1,000,000 was raised prior to the primary
election. Given Martha’s primary campaign burn rate, she may not have much money left. We’ll see soon when the pre-election report is released.

I love your optimism. Remember all the conservatives and conservative PACs that got behind Doug Hoffman?

Huckabee, DeMint, Palin, and Club for Growth all endorsed him. They all have PACs and I think they all donated money to his campaign as well.

I was frustrated yesterday when I did a bunch of Google searches and couldn't find that any of them had endorsed Brown yet. But as I thought about it, I decided they may not have endorsed him yet for strategic reasons.

My frustration turned to hopefulness as I thought through the possible reasons why the big dogs have not yet endorsed him or contributed (that I know about).

I know I'm speculating about things that may not happen, but what do you think?

Aware of Massachusett's health care system, here is the bad news in an excerpt from Biggovernment. You candidates in MA need to address the future of the MA and Federal health systems.

The Mayo organization had 3,700 staff physicians and scientists and treated 526,000 patients in 2008. It lost $840 million last year on Medicare, the government’s health program for the disabled and those 65 and older, Mayo spokeswoman Lynn Closway said.

Mayo’s hospital and four clinics in Arizona, including the Glendale facility, lost $120 million on Medicare patients last year, Yardley said. The program’s payments cover about 50 percent of the cost of treating elderly primary-care patients at the Glendale clinic, he said.

“We firmly believe that Medicare needs to be reformed,” Yardley said in a Dec. 23 e-mail. “It has been true for many years that Medicare payments no longer reflect the increasing cost of providing services for patients.”

I'm pumped that John McCain has joined Mitt Romney and the folks over at http://www.mittromneycentral.com/2009/12/30/scott-brown-could-be-our-41st-vote-in-the-senate/ in supporting Scott Brown in his quest to become the 41st vote against the unconstitutional health care bill. Let's get everyone on board!