This is a follow up to my earlier report on my day at Scott Brown’s campaign headquarters in Needham, Massachusetts, in the western suburbs of Boston.

My expectations were fairly low. I figured I’d stay an hour or so, talk to some people, get a better “on the ground” sense of things, send out some tweets and do a post.

I arrived at around 11 a.m. The best description of the experience was that it was like one of those movies or commercials where everything is quiet until the actor opens a door, and then there is a blast of noise and light.

From the moment I arrived until I left about 5 hours later, the atmosphere was electric. I had not expected the frenzy of phones ringing, people walking in the door to write checks, dozens of people making calls to voters, and generally ebullient mood.

Those of you who follow this blog know that I am a big supporter of Scott Brown. So I claim no neutrality. And you can believe me or not when I tell you that there is an air of excitement and movement which is beyond belief.

They are out of lawn signs and bumper stickers. Completely. Nothing left, but people kept calling all day wanting to find out where they could get them. I was told it has been this way for days.

I made calls. I won’t get into the details of their phone operation, but let me say I was impressed with the computerized sophistication. I can say that the number one concern expressed by voters I spoke with and from what I heard from other callers, was jobs and the economy. The small sample I saw bears striking resemblance to what happened in Virginia and New Jersey; it’s still the economy, stupid.

There also was a lot of animosity surrounding the announcement that the Democrats would delay Brown’s certification if he won. People were calling in about that issue, and it was brought up on phone calls by the voters (the issue was not on the call script).

The attempt to delay certification has the potential to be a defining issue in the campaign because it crystallizes in voters’ minds everything that is wrong with politics.

There are plenty of anecdotes I could tell you, about people who usually vote Democratic who are voting Brown, but I’m not really sure I should be giving out that information. I also can tell you generally that the response from the phone calls (not just mine, but campaign-wide) has been overwhelmingly positive for Brown, and we called only independents. You can believe me or not, your choice.

Brown stopped by the office twice on his way to and from campaign appearances. Note to the Hillbuzz guys: He’s even better in person.

This is not a white wine and Brie campaign office. Note the photo below. People are surviving on donuts and pizza.

What I saw today was just a snapshot of the campaign. But that snapshot showed to me a truly grassroots campaign bursting at the seams with energy and enthusiasm and support.

If what I saw accurately reflects what is happening statewide, it is going to be very, very interesting on January 19.

Update: What I saw is echoed in what PPP found in the poll released tonight, huge excitement for Brown, not so much for Coakley. And Boston Globe poll released Sunday morning contains much spin, but shows tie among most motivated voters. 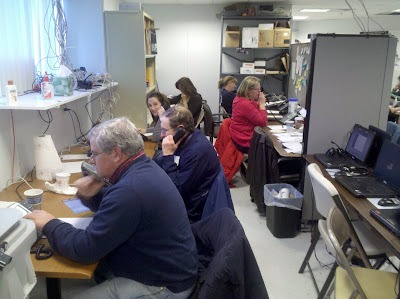 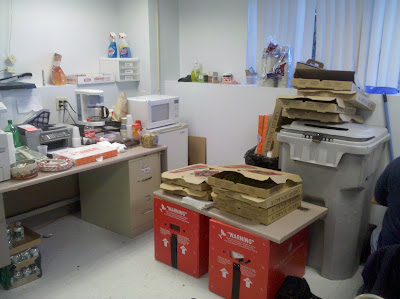 ——————————————–
Related Posts:
Snot-Noses for Coakley
Call Dems Bluff On Refusing To Seat Scott Brown
The Death of Feminism: “Save Us Martha!”

American Power tracked-back with, 'From the Scott Brown Headquarters'.

Great coverage! Thank You. I perused some MA online newspapers, and by and large, the (D)'s are fed up, and voting for Brown.

My 14-year-old son and I worked the phones for a few hours at the Littleton office. They had more people than phones earlier in the day. We came in as things were slowing down. The energy is awesome!

In two hours of phoning and asking unenrolled voters if we had their support, I had two "no" answers. I had mostly "yes" answers, but the best were the "undecided". In most cases once I got to the issues question, they started talking and expressing their concerns. I could share Scott's views and suggest they watch the upcoming debate, and most of them came right over to our side. There are a lot of frustrated people out there.

This is the first time I've ever done this — what a great experience! Even better, my son did this as part of the Young Republicans Club. He is hooked on politics!

This is getting more exciting by the moment; thank you so much for your posts on this campaign.

I had to laugh at our assurance to the HillBuzz boyz about Hottie McAwesome.

If Scott Brown gets elected, I hope he rewards both you and sisu with ambassadorships for your dedication. Oh wait. Wrong election.

You've been blogging about this election almost exclusively for a while now. I'm curious. Did you identify yourself as the proprietor of this blog? If so, were any of the volunteers manning the phones aware of it?

Am still loving at your reference to the Hillbuzz boyz about Hottie McAwesome….. truly…. I agree that he looked really hot in the Cosmo spread….

It's completely intoxicating being a part of something like this – it takes on a life of its own.

If you can get to one of the call centers, by all means do it. If you can't head to Brown's website and call people on line from your computer.

It seems that everyone in Massachusetts is talking about this election and is catching this enthusiasm. I spoke with half a dozen friends at a Baby Shower (new niece/nephew on the way) and they launched into a discussion without any prompting from me. When they found out that I had been volunteering they wanted to know all about it.

Michelle Malkin just posted that Brown is now leading in the polls. Just imagine if you had been dialing instead of tweeting, this race might now be all over. No telling how much time was wasted kicking you off of the phones and how many percent that delay and waste of idle resources cost Brown.

I wish we could clone Scott and bring him to the AZ. There are plenty who follow the East Coast way of politics and many are very interested in seeing how this exciting election will play out.

Keep up your excellent work on blogging of Scott Brown. God Bless us all who can now see there is a movement to change this great wonderful nation on God's green Earth.

Linked at LCR Professor, thank you for your hard work!

By the way, when reading that PPP report on that link, pay attention to the part that Brown's support is strongest among voters who have a negative opinion of BOTH parties. If Brown wins, regardless of the likelihood that he is a conventional establishment Republican, it's a major victory for the Tea Party agenda and another black eye for the RNC and establishment GOP. Hopefully, this isn't lost on Brown.

We have a blog post supporting Scott Brown – including 3 campaign video posted on Common Cents…
http://www.commoncts.blogspot.com

Out of signs? Bah. Tell people to make their own!!! (One of the most-remarked-upon hallmarks of early tea party rallies was our hand made signs)

Better yet, if you're overloaded w/ volunteers, put them to work with magic markers, making signs. Pass 'em out like candy.

I predict the media would love it…hand-made signs popping up all over the state!

@JeanneB – Funny you should mention. Apparently many of the callers said they would do just that.

Good. Tell phone answerers to suggest it. All they have to do it write "Brown" on a piece of poster paper and tack it to a tree or put it in the window of their car.

I am unemployed, have been for months…my wife has only been able to find part-time work…but we sent $10 to help. I hope it does.

@ Rich V.
Never underestimate the power of $10! Part of the measurement of campaigns is the breadth or number of contributions.

In another special election (CA-10) we donated to last Nov like this one, we got this email from David Harmer who lost to the liberal Democrat Lt. Gov. Garamendi. "We raised $838,115 from 3,061 donors in just six months." They are watching and counting! Harmer didn't win but his success in a D+11 district is buoying a run in neighboring CA-11 held by two-term liberal Democrat McNerney in a R+1 district.

Worked the phones in the worcester office today after working at the hospital. Never been involved in a political campaign before, but proud to be in on this one (in my small way).
Doctor in MA

Sounds great; I live on the north shore, and even many Dems i know will not be voting for Coakley, if they vote at all. I'd like to share a poster for Brown, since i can't get any of the official ones. Please spread it around if you like it: http://i950.photobucket.com/albums/ad345/ByroniusMaximus/ThePEOPLESseat.jpg

I've had a serious problem with phone calls from these offices. I get no less than 6 calls a day about Scott Brown. It's absolutely ridiculous. I called the main headquaters again today, and they have no solution to this problem. They don't even care. They're very rude and obnoxious. I was told tonight that they were "actually going to do something about all these phone calls" but I doubt it. I plan to go to the local police department.

Campaigning via telephone shouldn't happen if they're not capable of handling it in a civil manner.

I personally cannot wait for the 19th, and will be voting for Martha Coakley.