Posted by William A. Jacobson Wednesday, November 11, 2009 at 10:46am 2 Comments
More Sharing Options

Hey Selma, this should make you happy.

Rasmussen reports that Obama is down to -10% on the strong approve/disapprove index, and his overall approval is down to 46%:

The Rasmussen Reports daily Presidential Tracking Poll for Wednesday shows that 30% of the nation’s voters Strongly Approve of the way that Barack Obama is performing his role as President. Forty percent (40%) Strongly Disapprove giving Obama a Presidential Approval Index rating of -10 (see trends). Republicans have opened a six-point lead on the Generic Congressional Ballot….

Overall, 46% of voters say they at least somewhat approve of the President’s performance. Fifty-three percent (53%) disapprove. 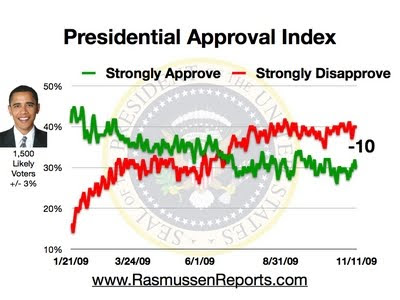 thanks for posting this is really exciting news that the America public is starting to wake up!