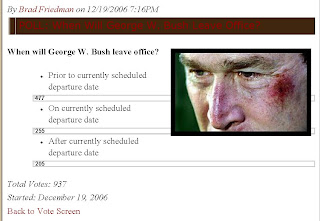 Today is “military dictatorship day” (per Ed Morrissey) in which there is speculation from all sides about whether Obama would be removed in a coup or assume dictatorial powers.

Crazy, huh? The left-wing blogosphere, in particular, is in a tizzy about this threat to the Republic.

Well let’s remember that not long ago, some left-wing blogs and pundits were arguing — with an apparently straight face — that George Bush might mount a coup or refuse to relinquish power:

We’ll have to get rid of Democratic hegemony the old fashioned way, at the ballot box. In just 13 months.

Listen, it's a darn good thing no military veterans are actually discussing such stupidity. If they were, the Progressives would all be running around hysterically trying to 'negotiate' with the errant bloggers and pledging to 'pull out' of Washington.

Regardless of which side of the political fence you sit on, we're all Americans who IMO believe in the peaceful transfer of power – not military coups.

Enjoy your posts. Thanks for being nice.

I do think that the USA needs some radical change to their electoral system……radical? Not what you think….

What I think is that the USA needs to get rid of the electoral colleges, and the primaries that you have at the present time… or at least modify them in the future…..

At the moment one of the weaknesses of the USA system is the way in which people are registered to vote. This is the weakness that is being exploited by ACORN, Project Vote, the Gamaliel Foundation and other groups…..

In Australia we have the INDEPENDENT electoral commission for the registration of all people who are eligible to enroll to vote. The difference in Australia is that voting is compulsory. When you move to another state or territory you must enroll in that state or territory. Only people who are authorized by the AEC can go door to door requesting information about the make-up of the household (as in how many voter age adults are present, and verifying their names). At the last territory elections we were sent an id card that we needed to use in order to go to the booth to register our vote.

From what I have been reading the present system in the USA has allowed the voter fraud. This does not mean that we are free from voter fraud…. we do have similar problems and the beneficiaries seem to be the ALP (similar to the Democrats).

As for the pundits on the left, it would seem that they are such wackjobs that they could not be more wrong in their punditry. If they were not suffering such a severe case of BDS then it should have been obvious that Bush never had such intentions. They were projecting what was either on their mind, or what their own incumbent is likely to do.

Now the thing is, that in Iran where there is a puppet President who answers only to the Grand Pooh Bah, what was claimed against Bush, did in fact happen. What we saw in June was Ahmanutjob losing the Presidential election which then heralded the coup that did in fact take place. Yes, in Iran there WAS a MILITARY COUP at the hands of the Basij who were brought in from Syria, Lebanon and Palestine to put down the people of Iran. Such an action was never likely to happen with GWB as President. To make such a claim shows that such pundits are in need of medication…. I say this as an outsider, a non-USA citizen, and one who did not like Bush…. or at least was wary of him.

"Remember Bush Coup Talk?" — No. And obviously you can't neither because the examples you gave are really quite ambiguous and quite frankly, pathetic.