Is Obama’s Grandmother Now a Prop?

Is Obama’s Grandmother Now a Prop? 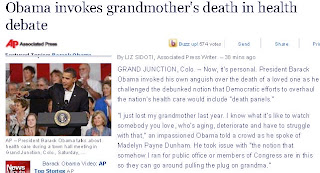 Barack Obama has invoked his experience with his grandmother’s death in support of his health care restructuring plans.

We each have personal experiences with the health care system, and other aspects of society, and we can use those personal anecdotes as we see fit, including political discourse.

But when it comes to Sarah Palin and Trig Palin, there is a completely different standard.

When Sarah brought Trig on stage at the Republican National Convention, and at campaign events, the left-wing blogosphere and pundits went wild with condemnation. The Chairwoman of the South Carolina Democratic Party asserted in response to seeing Trig at these events that Sarah’s “primary qualification seems to be that she hasn’t had an abortion.”

Numerous bloggers picked up this line of attack, claiming that Trig was being used as a campaign “prop.” The “Trig as prop” meme has been used consistently by the left-wing blogosphere, including earlier this summer when Trig appeared in Runner’s World photos with Sarah.

The “Trig as prop” meme also was used to justify crude Photoshops of Trig, as detailed in my prior post, Wonkette Goes After Trig Palin Again.

Just days ago, when Sarah invoked Trig in the debate over “death panel” provisions in the health care restructuring bill, the “Trig as prop” line appeared with full force. A blogger at the popular Firedoglake, linking to a post about the Trig Photoshop controversy, proclaimed the “Tao of Trig,” namely “Sarah’s first rule of Trig: Don’t talk about Trig, unless you’re me.” Another Firedoglake blogger used the term “prop baby Trig” (word strike in the original).

James Wolcott at Vanity Fair asserted that Sarah’s use of Trig amounted not only to using Trig as a prop, but revealed Sarah’s secret death wish for Trig:

That Palin would place her Down Syndrome baby in the same sentence with a highly charged phrase like “death panel”* isn’t just cheap, morbid melodrama (personalizing the health-care issue to a shameless degree), it may betray an unconscious resentment of the burden such a child represents and a desire to be rid of that burden. Putting Trig and “death panel” into conjunction to score a dubious debating point is not an act of loving-kindness or consideration.

It is not only unkind for Palin to use her Down Syndrome child as a rhetorical prop, a political football, it is exceedingly unwise. She would be well-advised to dial down the Joan Crawford histrionics–such stridency is vulnerable to sudden, shattering cracks.

Another blogger proclaimed: “It’s nice to know that Trig passed his mother’s ‘death panel’ and has been afforded the right to live – as a prop only, of course.” At the Huffington Post, blogger Robert Elisberg went so far at to say that Palin’s use of her children as props made them fair game:

Sarah Palin, on the other hand, has found few events she couldn’t shove her children into – during the campaign and after. Sarah Palin used her children so much that they not only became circus props, but Barnum & Bailey probably took lessons.

Wherever she went, she seemed to have her youngest child on her shoulder. Whenever she could talk about her child having Down Syndrome, she did…

The person who has been putting her children on stage, while shedding crocodile tears for a year how they are off-limits – just used her Down Syndrome baby as another circus prop by writing for a national audience how he could be killed by the government.

Not even taking into consideration that Obama called his grandmother a “typical white person” to deflect attention from Obama’s association with Jeremiah Wright. Not even if attacking Obama’s grandmother seemed like just payback for the treatment of Trig and Sarah.

Leave the kids and family members alone. We can win the health care debate on the merits, so let’s do it.

UPDATE: Jim Treacher’s post reminds me that Obama also invoked his grandmother’s medical history with regard to whether she should get a hip replacement, and the issue of end-of-life care. Still no reason to mock the grandmother. We can discuss the merits of end-of-life care, including the merits of what Obama and Palin said, without getting personal about a politician’s family.

Specifically, he said he could no sooner disavow Wright than he could disavow his grandmother – a month before he disavowed Wright. The mass delusion that Obama is something other than a typical self-serving politician – willing to say anything at all to get power – is one of the wonders of our age.

When I think about the radical paranoia of the left, I worry how they'll deal with things now that they have so much power. They are so scared of conservatives that they'll go way beyond the bounds of reason at the slightest provocation.

It's not his grandma's fault that he's treating her like this, and we're not saying anything bad about her by pointing out how wrong it is.

Everything about Obama is a prop, to be used for conflicting "points" sometimes, and tossed under the bus when it becomes a "distraction".

@Jim Treacher – I agree your post is appropriate, you dealt with the substance, not the person.

Obama will use as a prop or throw under a bus, ANYONE who may further his Obama Con Agenda.

If I remember correctly, the Obama's spent a week in Hawaii last year and Obama spent less than an hour visiting with her. For appearances sake I'm sure.

This was the last time he saw her and when they knew she only had a few days, he couldn't leave the campaign trail to be with her. She died with no family there.

Is grandma a prop? I guess "grandma" refers to the Typical White One, or TWO. Well, I don't know. When the Obamas have a few friends over and they get so rowdy that contract bridge is proposed is there still the problem with the missing leg on the gray-topped one?

I thought so. Just as in his younger days, grandma is still supporting his efforts.

momtotwo: you don't remember correctly. Obama visited her a few days before she died, even though he was in the home stretch of the campaign. Everyone knew that she didn't have much longer to go, and they said their goodbyes.

Madalyn Dunham died the eve of the election.

Wow, is it possible to pack one more piece of bad information in there?

Obama and his family visited his grandmother almost every day of their vacation there in 2008.

He left the campaign trail again to spend time with her about ten days before she died. She was cared for to the end by her loving granddaughter, Obama's half-sister, who lives in Honolulu.

Are you deliberately dishonest or just profoundly ignorant?

T-Steel said, in a response to a statement by Morntotwo prefaced bythe qualifier "if I remember correctly" "Are you deliberately dishonest or just profoundly ignorant?"
This is the problem with the internet: catch someone in a mistake, and you think you win the right to get aggresively arrogant. If that mistake had been made in a face-to-face conversation with you, would you have responded with those same words? If so, you are a very rude and unpleasant person in real life, too!
And, BTW, compare what Obama said in "Dreams from My Father" about his grandmother's supposedly using racially derogatory terms in his presence with the allegation he leveled against her in that speech he made to try to get out from under Wright without "disowning" him. I think Obama lied in that speech – about his own grandmother – in order to get elected.
It's the kind of person that Obama is that really counts.

At this point in history, when the correct information is a simple Google search away, "if I remember correctly" just doesn't cut it Jim O., especially when one's incorrectly remembered "facts" are used to slur someone's character. So why don't we just leave it that momtotwo is either too lazy to do basic research or is just being disingenuous. But that's the conservative m.o., so I'm not surprised.

Furthermore, Obama using a recollection based on fact is completely different than Sarah Palin using Trig as a hypothetical example of what might happen under health care reform. You do see the difference don't you? Palin's assertion is unprovable and inflammatory, not to mention a lie.

Hey you left out the part from my post about how Sarah Palin considered aborting Trig but didn't because she had to walk the walk after having spoke out against abortions. But thanks for the link!

CFK:
Final post for me on this thread; if you want the last word, you got it. The point of my first paragraph was the arrogance that many commenters display on the 'net when they catch someone in a mistake. I wasn't excusing the mistake, nor attributing the arrogance to "liberal m.o."

A recollection based on fact? What fact? Does the recollection match up with the fact? I assume that, like me, you have forced yourself to read all of the turgid, boring "Dreams From My Father." Having done so, do you really believe his description of Mrs Dunham in the first Wright speech is consistent with the book? If not, which is the lie?

None of that has anything to do with Palin, whom I mention in neither of my previous comments. Go argue with somebody who cares about her.