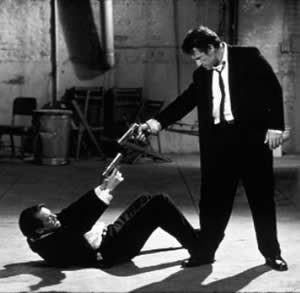 Democrats need both groups to vote in favor of any bill in order for it to pass without substantial Republican support.

Democrats have created a Mexican Standoff, with each side pointing a philosophical gun at the other. Neither can move without giving up fundamental principles, and political credibility. Each is paralyzed with fear of failure, but unable to do anything because surrender on the public option is not a viable option.

This situation results from a lack of experience by Barack Obama. One of the criticisms of Obama during the campaign was that he never had run anything. And it is showing.

Failure to lead allowed the two factions to box themselves into positions diametrically opposed to each other. In an organization in which the chief executive has ultimate decision-making power, this would not be a problem.

But Obama does not have that power in this situation. The Senators and Congressmen do not work for him.

Don’t get me wrong, I’m glad Democrats cannot unite on the disastrous health care restructuring proposals, reflected in the monstrous draft House and Senate bills. But let’s be clear. The Democratic dilemma has nothing to do with Republicans. It is the result of mismanagement of the agenda by the Obama administration.

The smart choice for therm srrategically is to just go pass the bill without the public option (the blue dog version with co-ops that mimics Romney-care) and try for the public option seperate at a later time when more people support it….unless they think no one will ever be that stupid.