Posted by William A. Jacobson Wednesday, March 4, 2009 at 09:17am 7 Comments
More Sharing Options 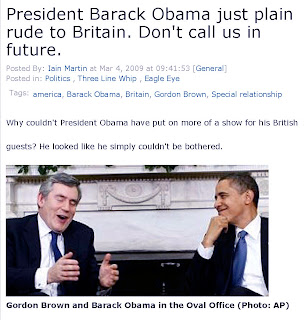 Nothing quite like insulting our closest ally. Great job. Britain’s mistake was sacrificing its soldiers to help us in Iraq and Afghanistan. Gordy should have seen it coming once Obama sent back the statue of Winston Churchill. If Gordy wanted the red carpet treatment, he should have spent more time bad mouthing Bush and complaining about the “imperfections” of America.

From The Telegraph newspaper blog in Britain.

—————————-
UPDATE: This piece in the Washington Post describes the insult quite well:

Our British cousins are getting the feeling that the new administration doesn’t fancy them….

And the alarm bells really went off when Brown’s entourage landed at Andrews Air Force Base on Monday night. Obama, breaking with precedent, wouldn’t grant the prime minister the customary honor of standing beside him in front of the two nations’ flags for the TV cameras. The Camp David sleepover that Blair got on his first meeting with Bush? Sorry, chaps….

For the president — beloved by the world largely for the fact that he is not Bush — it was a surprisingly cool reception for an ally….

Somewhere in the British Embassy, a bronze bust of Churchill was turning in its storage crate.

On a daily basis now, Obama proves he is arrogant and narcissistic. This will offend our allies and embolden our enemies more than anything Bush said or did. This is poor diplomacy and just plain rude. It is embarrassing for the American people!

Ah yes – the Gordon Brown who only a few months ago said about the economic crisis (which he has since called “a depression”):

“This problem started in America. They have got to sort it out. The Americans have a responsibility to the rest of the world. We took measures in Britain necessary to put confidence in the system. When there has been a problem we have dealt with it.”

And yet, Obama still said (what an insult!):

“What I’m confident in is that our strongest partner in that effort once again will be the United Kingdom and the Prime Minister sitting next to me.”

Sheesh. I was figuring that people were ready to castigate Obama for showing too much deference for a world leader who blamed America on starting a global depression and causing his own countries economic problems. Good that you can switch directions that rapidly!

Well that certainly justifies being rude to the Prime Minister of our closest ally at a time we are asking them to send more troops to Afghanistan and to help us in the Middle East “peace” negotiations. Let’s take a sentence or two, or a speech or two, in which Gordy sounded just like Obama, and then use that to damage relations. After insulting the Prime Minister, Obama said some nice words about the relationship. That’s great.

LOL – you are acting as if stabilizing Afghanistan, and Middle East peace negotiations, are solely a US concern. I’m pretty sure that BP, with extensive investment holdings throughout the Middle East, has somewhat of a different take on the matter and perhaps more influence on what Britain will decide to do or not do in the future, than what heppens on the diplomatic front.

I know that after 8 years of every visit by a foreign dignitary being an opportunity for mondo pomp and circumstance, Obama scaling back a little may seem like arrogance. Or one could say that instead of an imperial Presidency, where ceremony is central to function, we’re seeing a “rolling up the sleeves to get things done” Presidency.

I don’t know if Obama will be more or less successful than Bush (I certainly expect more) – but it is clear that Bush pretty much seemed to live for those opportunities where he could make a big deal over entertaining a foreign leader. Obama has a different style. The interpretation of it being “arrogant” is as much a reflection of the viewer, I believe, as it is of the man.

So the fact that this was the first meeting of the two, that Gordon Brown brought his wife and the fact that there was not even the traditional press conference held by EVERY PRESIDENT (not just Bush) means nothing, eh?

The fact that everything Obama has done indicates he could care less about allies and cares more about ‘looking good to the world’ (particularly the muslim world) is nothing to bother about, eh?

Fair enough. We shall watch and see. Give him the chance, as the liberal following have chanted.

In fact, I will allot him the exact same chances afforded President Bush when he was first elected in 2000.

“the fact that there was not even the traditional press conference held by EVERY PRESIDENT (not just Bush) means nothing, eh?”

Hey does anybody remember some of the hostility between Kenya and Britain back in the colonial days? Do you think this antipathy has anything to do with that history?

Part of Obama’s change seems to involve alienating our long time allies while trying to make nice with Iran and “reboot” with Russia. Those two are going to run rings around him and make a fool of his administration.

“The interpretation of it being ‘arrogant’ is as much a reflection of the viewer, I believe, as it is of the man.” That’s a load, by the way. Arrogance is a very real thing.