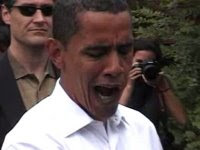 I saw the photo (right) of Obama over at And So It Goes In Shreveport blog under the headline Time for a Nap. The post concerns the concerns of Obama aides that Obama is not getting enough sleep.

While I never had seen that photo before, I was sure I had seen something similar. The facial expression bespeaks overblown oratory with an egotistically-tinged subtext which shouts “I can say whatever I want, and there’s nothing you can do about it.” 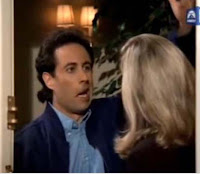 Then I remembered where I had seen this before. It was the Seinfeld “Hellooo” episode, where Jerry decides to continue saying “Hellooo” (in an extended deep-throttle mocking voice) even though his girlfriend hates when he does it. Jerry, after pondering the laughs he gets from the voice versus the good times he has with his girlfriend, decides to take the voice over the girl. The video clip is here.

What does it all mean? I don’t knoooooow.

OMG you nailed it! Perfect!

Thank you so much for the linkage. I’ll be checking in and returning the favor frequently, I’m sure.

You have to check out the new Evan Sayet video.