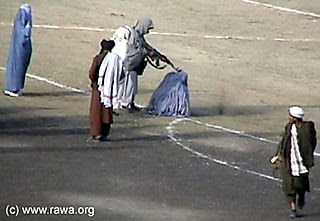 We will bring the people watching the execution into the government because they are moderate, but not the person firing the weapon, because he is not moderate.

Unfortunately, the Taliban disagree that there are any moderates among them:

“This does not require any response or reaction for this is illogical,” Qari Mohammad Yousuf, a purported spokesman for the insurgent group, told Reuters when asked if its top leader Mullah Mohammad Omar would make any comment about Obama’s proposal.

“The Taliban are united, have one leader, one aim, one policy…I do not know why they are talking about moderate Taliban and what it means?”

Actually, there might well be “moderate Taliban.” although the term is misleading; Pashtun tribesmen aren’t into thinking of themselves in Western political categories.

There certainly are groups, clans, followers of this or that local chieftain who may have fought the Soviets and Afghan Communist regime, then sided with the Taliban to fight the hated Taziks or the even more hated Hazaras, then surrendered to the Northern Alliance and switched sides, then moved back to the Taliban again.

Indeed, there probably are a great many current Taliban fighters in this category (Biden said the other day the proportion could be as high as 70%). The trouble is this: who knows which Taliban are which? I’m not trying to be cute. Notice that among the stream of reporters, columnists, supposed experts writing op-eds, TV talking heads and politicians who are taking up the new line that we can “deal” with the “moderate Taliban,” no one — not a single one I’ve read and I’ve read dozens — has hinted at knowing where these potential ex-Taliban are to be found (not even those like Biden who’ve taken to sounding more in-the-know by imitating Obama in pronouncing the word, TAH’-lee-bahn).

No hints based on the names of known leaders (many have been around for 25 years); no hints based on locations within Afghanistan or Pakistan; no hints based on recent history of participation in fighting by one or another tribal or subtribal group. There are at least 60 major Pashtun tribes — the Mohmands, the Dotaani, the Sayani, the Afridi, the Mahsud, the Waziri, the Durrani, the Orakzai, the Guilzai, etc. — hundreds of sub-tribes and many more clans and fractions of clans.

So who does know? I’m afraid the answer may be no one among the Americans and the fighting Western allies. Our military officers are rotated in and out of the conflict too frequently to acquire any in-depth local or regional knowledge. Few of our people (including CIA, State and military officers) speak Pashto or any other local language. Some senior intelligence officers as of 2001 had a lot of experience in the region but most of them have passed retirement age (e.g., Gary Schroen who led the first team into Afghanistan in October 2001). Some mid-level CIA officers have acquired a pretty good grasp of the people and the situation since then, but there are few of them and they are not making policy or giving orders.

I’m convinced that this is a top-down policy. That is, at the top, in part based on the success of the Awakening in Iraq, people have decided that we must woo elements of the Taliban away from their current loyalties. So write up those orders and get to work. But we will have to depend on less-than-dependable Afghans and downright untrustworthy Pakistani ISI guys to figure out who to approach and woo.

This will take years. The first step will be to build the Afghan government and army up to snuff so it can be a reliable partner in “reaching out” to insurgents. However, this implies creating and maintaining security in such a way that the government can function and tens of thousands of soldiers trained. I don’t see any way this can happen without a major increase in the US military footprint.

Sorry for being so lengthy. This is an issue about which I feel strongly.
I like your blog. Keep up the good work. I have a blog to at:

Thanks for the comments. It may be possible that a tribal strategy could work in Afghanistan as it did in Iraq, but a “split the Tabliban” strategy doesn’t seem to make sense to me. The tribal strategy is similar to the warlord strategy used to remove the Taliban in the first place.

How can one tell the ‘Moderate Taliban’? He’s the one using an electric knife.