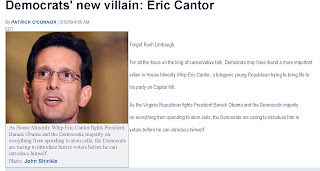 The Politico has an article detailing the Obama administration’s targeting of Congressman Eric Cantor. According to the article, Obama’s political advisers are coordinating a campaign in the media and through unions “to introduce him to voters before he can introduce himself.”

In other words, the President who promised to end politics as usual is engaging in the type of smear campaigns that Bill Clinton’s advisers reserved for Clinton’s paramours. This is not surprising, since Cinton’s advisers — Emanuel, Begala, Carville — are running much of Obama’s political strategy such as targeting Rush Limbaugh. The Clinton team has taken the bimbo-eruption tactics and brought them forward to a new generation of Americans.

As I have noted before, this is consistent with Obama’s obsessive need to find enemies against whom to run. Obama’s ideas — massive spending, equally massive tax increases, abandonment of workers through card check, socialization of health care and education, etc. — are running into opposition from the American people on the merits. Even Whoopi Goldberg is getting her back up over Obama’s tax plans: “I’m losing my mind because I don’t understand …. I don’t want to get it coming and going…. Back off of me.”

Finding enemies, defining them in distorted ways, and distracting attention, are the hallmarks of the Obama way. Of course, some of us knew that Obama was a phony with his rhetoric of a “new” politics, while others are just learning the hard way. Sorry, Whoopi, you have no one to blame but yourself for trusting Obama.
————————————————————
►The least Obama could do is give Cantor a big Obama “hellooo“

►For more on where we are heading, check out The Revolt of the Kulaks Has Begun, The Last Bull Capitulates and Not Too Early For “I Told You So”.

These political tactics are right from Saul Alinsky. Since Obama cannot defeat Cantor and others on the merit of facts, Obama will just get out his “Rules for Radicals,” and find the target, freeze it, and destroying it.

Well…Whoopi better watch it. She may find herself on the same list (which is growing FAST) as Rick Santelli, Jim Cramer, Rush Limbaugh, Eric Cantor, Sean Hannity, and others.

Just a couple of weeks ago, Wonkette ridiculed Cantor for his enthusiasm/obsequiousness/civility (depending on your point of view) when speaking to the president, with a post entitled “Eric Cantor Gets Boner When Obama Talks To Him.”

Just goes to show there’s no point in being civil to lefties.