Obama’s Bed Fit For A King

Obama’s Bed Fit For A King 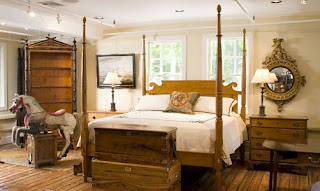 The Obama bed has made its way from a fancy antique shop in Seekonk, Massachusetts, to the White House. The 200-year-old antique tall-post tiger maple bed was resized to king for the Obamas. The bed comes from Leonards antiques, which did not reveal the price. A local newspaper noted that “similar items on the Leonard’s website are priced between $9,000 and $10,000.” According to reports, Leonards “has furnished the homes of Hollywood stars like Bill Cosby and Robert Redford.”

Too bad Obama spent so much (of our?) money, since he could have gotten a bed for free from Beds for Obama. But that would have been so commoner.
—————————————————————–
UPDATE: A video of the bed being prepared and polished is here, and an interview with the store owner here.