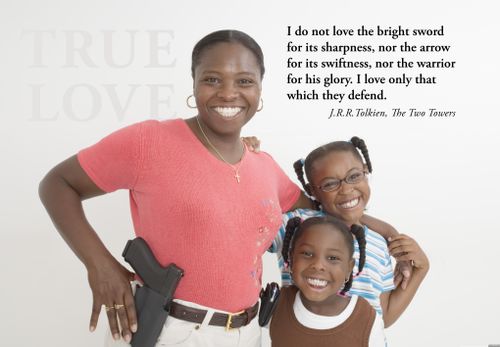 Posted by William A. Jacobson on November 06, 2013 17 Comments
A rare dose of sanity at Salon.com, Who will protect us? Why I’m still conflicted about guns as a black feminist:

I was 15 years old when my mother and I were robbed at gunpoint. It was 1982.... I don’t own a gun but I know plenty of educated black women who do. These are working- and middle-class women, some of them single and some with families, and  statistics support what I see. According to a National Shooting Sports Foundation report, 78.6 percent of retailers reported an increase in the number of women buying guns in 2012. Although a 2013 Pew research report reveals that gun ownership remains overwhelmingly white and male, black women made up the fastest growing purchasers of concealed handguns in Texas between the years 2007 and 2012. J. Victoria Sanders, a black Texan and journalist, reported this trend in a 2011 article detailing the increased marketing of guns to women and Sanders’ own journey toward gun ownership. This movement toward guns seems a rational decision for black women when you consider some of our experiences. Historically, black women have been left unprotected as a matter of law and custom, our bodies designated as commodities, used as “de mule uh de world” as Zora Neale Hurston wrote, and as sites for sexual violence and mockery. In an analysis of 2011 data, the Violence Policy Center reported that black women are murdered at rates three times that of white women and these murders usually involve a gun used by someone that the woman knows. Given these realities, some of us are pragmatic about self-defense. Even when we identify as feminist, as I do, we remain uncommitted to anti-gun feminism that erases our specific experience....