“The only swimmers Henig beat were those who specialize in other events — and a guy who is missing an arm.” 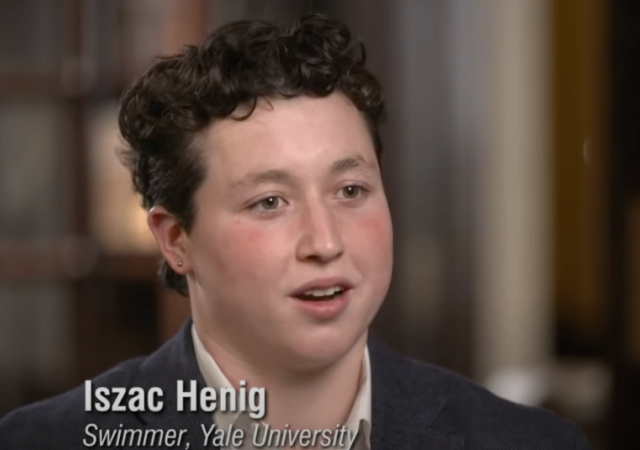 Trans athletes who go from male to female, like Lia Thomas, seem to have tremendous success. The opposite scenario doesn’t seem to work out that way. It’s curious, isn’t it?

A transgender male swimmer at Yale University has proven what people with a grasp of basic science already know — that men have certain biological advantages over women in the realm of sports.

Iszak Henig (pictured), who last year as a female held All-American status, finished 79th as a man out of 83 overall competitors at a meet in November, Fox News reports.

The only swimmers Henig beat were those who specialize in other events — and a guy who is missing an arm.

Henig’s results stand in contrast to those of the University of Pennsylvania’s Lia Thomas, who’s transitioning from male to female. Thomas’ performances as a male were pretty good; as a female, however, she ended up smashing records.

But Henig wrote in The New York Times he doesn’t much care about being competitive.

“Instead, I’m trying to connect with my teammates in new ways, to cheer loudly, to focus more on the excitement of the sport,” Henig wrote. “Competing and being challenged is the best part. It’s a different kind of fulfillment. And it’s pretty great to feel comfortable in the locker room every day.”

Henig said trans athletes “deserve to be celebrated just as cis athletes are” and that they are “not cheating by pursuing [their] true selves.” He added there is “so much more to a great athlete than hormones or height” as evidenced by his besting of cis men in competitions.

Henig’s comments are reminiscent of what Michela Musto of the University of British Columbia wrote back in September — that sports themselves are responsible for the “belief” that men are inherently stronger than women … and the “belief” that gender is binary.

The “strict sex segregation” at all levels of sport “gives the impression that men and women have completely different capabilities,” Musto wrote.

The cope is strong with this one. Furthermore, this loser did not have to transition to compete against men. What most people overlook is that “mens” leagues aren’t really mens leagues, but open leagues that accept the strongest competitors. Womens leagues are segregated in order to give the weaker sex a place to actually compete.

“Henig said trans athletes “deserve to be celebrated just as cis athletes are” and that they are “not cheating by pursuing [their] true selves.”

Henig is still on the team. I suspect Henig is enjoying quite a bit more “celebration” than you or I would with the same W/L record. I’ve seen better competitors cut from the team sooner.

“The “strict sex segregation” at all levels of sport “gives the impression that men and women have completely different capabilities,” Musto wrote.”

Spoken like someone whose education would severely benefit from a few rounds of Open MMA.

So long as she’s not coming last, she deserves to be on the team. She’s being judged by the same standards as the men (she insists on that, since she is pretending to be one), so if her performance would get a man cut from the team then it will get her cut too. But so far she’s performing better than the worst, so if they’re not bad enough to be cut then neither is she.

“But so far she’s performing better than the worst”
The worst guy has one arm.
You couldn’t sell this shit as fiction.

She’s likely last on her team. The people she beat were on other lesser teams. She’s there as a political prop and nothing more and she has unearned privilege because of that that she refuses to acknowledge because “muh lived experience”.

“male” is supposed to be a scientific term. Call her a trans-man if you must.

Funny until today I had never heard of a woman trying to get onto the men’s team so she can lose.

“Thomas’ performances as a male were pretty good….”