What if the other candies identify as female…or as a Skittle? 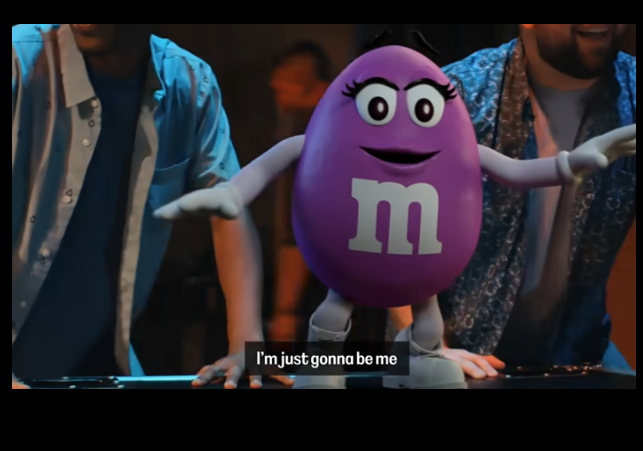 As we approach Valentine’s Day, an iconic time for chocolate, the candy company Mars has opted for a super-woke marketing campaign for one of its most popular brands.

The company has announced limited edition “all-female” M&M’s candy packages for a limited time to honor women who are “flipping the status quo.”

In addition to featuring the three female M&M’s on the wrappers, each package in this limited run will only include the corresponding green, brown and purple candy-coated chocolates.
The company announced the feminist-forward candy wrappers Thursday, saying it will exclusively display M&M’s female characters: the green, brown and most recently introduced purple M&M.

Mars indicated that there be milk chocolate, peanut, and peanut butter versions of these special upside-down packages, showing how women ‘are flipping how they define success.’ The purple candies are supposed to represent inclusivity.

They debuted ‘Purple’ – the first ever female peanut M&M spokescandy, who has been designed to represent acceptance and inclusivity and is ‘quirky, confident and authentic’.

More than 10 million fans voted to add the color to the confectionary’s current rainbow in May, beating aqua and pink.

Purple’s arrival was announced with ‘I’m Just Gonna Be Me,’ a new promotional song and music video, which launched on Tuesday.

Here is the video launching the purple version: Watch if you dare.

I must ask, what happens if the other colors identify as female? Or identifies as a Skittle?

Greg Gutfeld had a few other observations about the woke make-over M&Ms is getting.

The response to this announcement is probably “flipping the script” on what the woke marketing “experts” promised when launching this inanity.

Even my candy has gone woke. pic.twitter.com/EaJwQuhhCn

I long for the days of marketing when companies didn’t have to demonstrate allegiance to a political or social agenda and could claim they were better and/or better than the competition.

Will this impact my purchases of M&M’s, a family favorite? Yes, I think it will…as I personally am tired of this drivel.

Hershey candy bars come in male or female. With nuts and without.

They even have affirmative action. Not just dark. but, Special Dark.

Oh—those—the ones they give away free. They’re good.

But my favorite is the Special Reparations Pack. Inside there’s a golden ticken for one million dollars.

Peter Paul’s as well. You have your choice of nuts, or mounds.

I’m so sick of this idiotic Leftist propaganda being obnoxiously pushed by corporations onto consumers. I refuse to buy any product or service from a company that deals in this excrement. This stunt by Mars is as noxious and offensive as the nauseating trend of supermarkets, Google Maps and other companies gleefully boasting and labeling businesses and products as “Black-owned.”

Also ‘woman owned’. Even a roofing company around here advertises that.

Most of the time it’s a man who puts the business in his wife’s name. I’ve seen that A LOT.

If “[protected class] owned” is their claim to fame, I will look elsewhere. Same with the “fish” thing. i don’t CARE you are Christian; can you do the job?

Price and quality — that’s all I care about. References to the business owner’s ethnicity, skin pigmentation, sex, sexual orientation, religious affiliation, etc., are totally irrelevant to me. The only classification that I believe is different and deserves to be supported is the “Veteran-owned” label, which makes no references to any of the aforementioned categories. And, vets do deserve consumer consideration for their products, given their prior service. But, they still must compete on price and quality.

I’ve found that the “fish thing” is as equally likely to be an indicator of “borrowed valor” as the “protected class-owned” thing.

If it’s fishy, they are likely to be Pisces, probably working for scale.

Another prediction came true for the bee.

“Mmm,” & “mmm,” what people calling for help sound like when they’re gagged and blindfolded by DIE.

This brings up a point. A bunch of them are M&Ms. What is one? An M?

Maybe ’em and ‘em are the candy’s gender neutral pronouns?

The confectioners should issue guidance on the ethics of eating ‘em if ‘em is woke…. Wait, what if ‘em is alive? OMG, send help!

So…. I guess the purple peanut M&M is a nod to the trannies: a female with nuts.

In other news: Job reports show a significant increase in new jobs. Analysts attribute it to the number of people Babylon Bee had to hire to keep their content ahead of actual events.

Every contest looking for the best woman at something is going to find a man who is pretending to be a woman.

With all the real issues we face it’s nice to know a candy company has time to deal with existential crap that hasn’t been an issue for 100 years.

They should have black and white m&ms. About 90% black and 10% white to match their commercials.

Sugars are one thing, but if I see any trans-fats on the label, I’m out of here.

If it says trans you can go in any bathroom you choose.

I saw trans fats in California…

Get your diabetes, wokesters!

Perhaps it’s just me, but Mars Candy Inc. Board of Directors is looking a little pale in the diversity game. Also looks as if women aren’t represented too much either. What’s up with that.

When push comes to shove, they want competency.

Mars used to be a family company, and I believe they are still privately held and have never been publicly issued.

Where are all the biologists who can help us identify which M&Ms are female and which are not?

Wouldn’t that take confectioners rather than biologists?

Trans M&Ms. Purple on the outside, nuts on the inside.

I don’t eat eminems. I just listen to em sing.

And to think just a few short years ago people were bitching about the female M&Ms:

Some people are never satisfied.

Each and every time I think we’ve hit peak stupid, I’m wrong.

Part and parcel of watching your country die.

I guess the purple M&MS are supposed to be trans, since they have nuts?

I miss Bill Hicks even more when stuff like this happens.

Purple. Isn’t that the color of Rappin-Ho’s hair? I think of it every time I walk past the local “empty” Subway. I want to ask “how can Subway “top” themselves this time?” when the result is the complete opposite of top.

WTF is wrong with these companies anymore? Is the .GOV using some type of leverage over these companies to spread the woke virus? Smells like Fascism to me because I bet they are in bed with some .GOV entity to do this stupid crap.

With fannies high, Obama’s marching minions
Go prancing down America’s main drags!
It’s time to pack up all your un-PeeCee opinions,
Whether in speech, on airwaves, or in mags!

The gays and Muslims singing in sweet harm’ny,
Free from all criticism, even in a sigh.
No matter that before long one won’t be so smarmy,
And toss the other from a building high.

There’s now a slogan in your diabetes
Whether from M’s, or Pepsi, or from coke.
You now must celebrate all people who are seedy
To prove you’re anti-racist and quite woke!

–No apologies to Horst Wessel.

Well, I guess I’m done with buying M&M’s. I’ve eaten them for decades, and kept a pack on my computer desk for a long time. No more.

Sometimes you just want some candy to munch on and not a Leftist political agenda. Probably going give up any Mars candies. I’ll be healthier at least.

I’m giving them up too., and I’ve already emailed Mars and told them why.
This pandering is truly insulting.
A product should be able to stand on its own without virtue signaling idiocy.

I gave up Oreos and Twix for the same reasons.

Anyone employed by Mars capable of defining what a woman is?

I want to tickle my taste buds, not shave them off.

Can I give a Peanut M&M to someone with a peanut allergy if the Peanut M&M identifies as a plain M&M?

While all the male M&Ms gathered in their bag are grateful for the silence….