“Why Should We Defend Speech We Hate?”

“Why Should We Defend Speech We Hate?”

The Cornell Review, Cornell Political Review, and College Republicans will host FIRE’s Nico Perrino, who will speak about the speech climate at Cornell to ways to improve campus discourse. 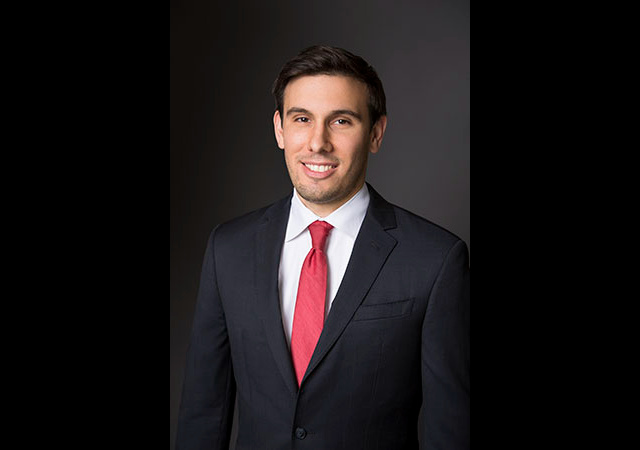 In addition to serving as FIRE’s EVP, Perrino hosts the organization’s “So to Speak” podcast. He has previously worked at the Institute for Justice. His writing has been featured in national publications, such as Newsweek, Politico, and The Guardian.

Perrino is expected to speak on a wide range of issues, from the free speech climate at Cornell to ways to improve campus discourse.

The event will be held in person in Landis Auditorium at 5:30 pm, with a virtual option available for those not on-campus. It comes almost three months after Cornell alumna Ann Coulter ’84 was interrupted by hecklers in the same auditorium.

The Cornell Review, Cornell Political Union, and the College Republicans at Cornell co-host this speaker event. 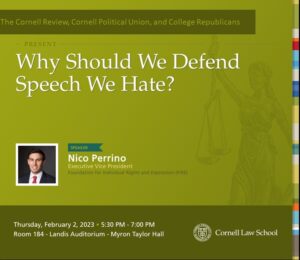 The most repugnant is the most protected…

Because neither Mr. Obama nor Mr. Trump should make the rules about what hate speech is.

What about the likes of Shiela Jackass Lee?

The right to dissent must be protected on campus and everywhere.

“Why should we defend speech we hate?”

Because words that have stood the test of time, that have been used and accepted for centuries should be defended even if some hate them and want to get rid of them —words like: “he – him”, “she – her”, “male – female”, “normal – abnormal”, “perverted – deviant.” These words should all be defended.

“Why should we defend speech we hate?”

Because tomorrow you may find it’s your speech that is declared hate speech.

Hate speech can be good. It’s an art form. Or you can automate it.
$ insult 10
You agonizing net of pestilential phalanger feculence
You racking sink of injurious tic-polonga snot
You heinous basin of diseased dormouse burp
You tragic gallipot of lousy Faverolle hormone
You unengaging kibble of gangrenous congo snake slabber
You grotesque bakepan of malign suslik flatulence
You beautiless dish of freeloving lung fish parings
You teasing jug of diabetic Colorado beetle dung
You appalling bandolier of leprous fruit-tree bark beetle stool
You hard-featured cruse of pathological teredo ejaculation

Kenneth Burke did a whole essay of vituperation somewhere just for fun.

A favorite of mine is from a log-forgotten movie called Topkapi.

Going from memory: he told me that I was a carbuncle on the behind of society”.

Best I ever did was, “You are not only a bigot, but a scum-sucking, toe-jam-eating, pustular
excrescence on the hairy ass of N’Gompa, the Ubangi god of ignorance.”

The answer is obvious, but we must defend speech we hate because someday someone may be in power who redefines good speech as hate speech. You know, like they’re trying to do right now. And the power to do this grows. First it’s speech, Then it’s practice of religion, which is bound up with speech.

Alt title for the talk: Shooting Fish in a Barrel to Troll the Perennially Indignant. Really, this talk is just a big Troll, right? I’m right, right?

Speaker-guy should say this, then spend the remaining 85 minutes demolishing attacks in the QnA, hatefully, one hopes:

“…because first, there’s a difference between defending the fact of and the right to speech someone hates, and defending the content of that or any speech.

— Lots of bad stuff happens, and good stuff gets forgone if the fact of particular speech gets stomped on just because someone doesn’t want it out there.

— That’s before accounting for the fact that people make speech. Stomping on speech is stomping on people. We probably want a higher threshold than vibrations in the air before stomping on people to shut them down. And “Shut it down because I hate it.” is quite a claim of authoritah.

…second, there’s a whole fleet of arguments why speech with hated or hateful content, even speech expressing hate, generally net/net does way more good than harm. Plenty of aspirationally destructive people are really just bad at it.

Leaving out arguments of convention, ethics, morals, or rights, net, we should defend speech we hate because that works out better for us. Selfishness of this kind turns out to be a virtue. (Was that a call back to speech we hate?)

Lemmie grab a sip of water, then I’ll take your questions…”

If you don’t defend the right to speak nonsense, you don’t begin to understand the freedom of speech.

It’s the age-old question of who defines hate speech. I remember when it was pornography and that was a mess for the SCOTUS trying to define what porno was. Someone will always hate any speech so how is it to be decided? The simple answer to the TV smut was to turn it off or change the channel. With speech you don’t like, walk away, or if that isn’t possible ignore it. I’m afraid that the woke Generation cannot abide anything that they fear or that they do not like and want to ban it. I’m afraid that they will turn out to be the weakest generation in our history and the least supportive of our Constitution..