PM Netanyahu: “The Jewish nation is not an occupier in its own land and its own eternal capital, Jerusalem.” 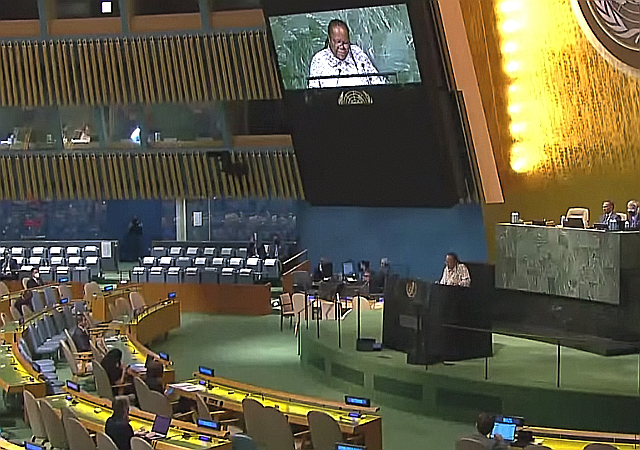 Gaza-based terrorist outfit Hamas and other Palestinian groups cheered the United Nations resolution calling for the International Court of Justice to probe Israel for the alleged “occupation, settlement and annexation” of its ancestral land.

The UN General Assembly on Friday night voted 87 to 26, with 53 abstentions, in favor of a resolution asking the World Court — located in The Hague, Netherlands — to open legal proceedings against the Jewish State.

The resolution passed by the 193–member global body, was soaked in loaded language, and asked the ICJ to suggest legal measures to be taken against Israel for what Palestinians and Arab states call the ‘judaizing’ of Judea, Samaria (the West Bank) and the holy city of Jerusalem.

🔴 The #UNGA passes shameful resolution to seek ICJ advisory opinion against #Israel, while also ignoring Jewish connection to the Temple Mt, the holiest site in Judaism, and questioning Israel's sovereignty over Jerusalem.

The resolution urged the ICJ, UN’s international tribunal, to set “legal consequences arising from the ongoing violation by Israel of the right of the Palestinian people to self-determination.” It also asked the court to investigate Israeli measures “aimed at altering the demographic composition, character and status” of the holy city of Jerusalem.

It is worth noting that UN-backed ICJ has no jurisdiction over Israel, and has not power to enforce its rulings. “As General Assembly resolutions are non-binding, the ICJ in the Hague will still need to decide whether to pursue such an opinion, with, at this point, an unknown outcome,” the Israeli TV channel i24News reported.

Netanyahu: We Will Continue to Fight For Truth

Israel’s newly-elected Prime Minister, Benjamin Netanyahu, slammed the ‘despicable’ resolution. “The Jewish nation is not an occupier in its own land and its own eternal capital, Jerusalem,” he said in response to the UN vote.

“We will continue to fight for the truth,” the Israeli leader assured.

"Just like the hundreds of distorted UN General Assembly resolutions against Israel over the years, today's disgraceful resolution will not obligate the Government of Israel. pic.twitter.com/mTmkeFl6AC

The final vote tally, however, does show eroding support for the so-called ‘Palestinian Cause’ at the UN. The Jerusalem Post noted:

When a preliminary November 11th vote was held on the request for an ICJ opinion, 98 nations in favor amounting to just over half of the UNGA voted with the PA in favor of that movie and only 17 countries including Israel opposed it.

In the interim, Palestinian support for the resolution dropped by 11 votes, while Israel gained the clear support of an additional nine countries.

Holding this vote on Shabbat when the Israeli delegation couldn’t attend tells you everything you need to know https://t.co/GmbtPImBso

The Palestinian Islamic terrorist group Hamas rejoiced at the UN vote, and saw it as big step towards achieving it own jihadist aim of destroying Israel. The PLO-controlled Palestinian Authority echoed the sentiments stated by the Gaza-based terrorist group.

“The time has come for Israel to be a state subject to law, and to be held accountable for its ongoing crimes against our people,” said Nabil Abu Rudeineh, spokesman for Palestinian President Mahmoud Abbas, whose Palestinian Authority has limited self-rule in the West Bank.

Basem Naim, an official with Hamas, the Islamist militant group that controls Gaza, said it was “an important step toward confining and isolating the state of occupation (Israel).”

The statements come as Hamas and Fatah try to reconcile their differences as they step up their onslaught against Israel. “Thousands in the Hamas-controlled Gaza Strip staged one of the biggest celebrations in years for the rival Fatah movement of Palestinian Authority President Mahmoud Abbas on Saturday,” the Israel news website Ynet reported.

Why does the phrase “The bombing begins in 20 minutes” come to mind?

The Judaizing of JUDEA. The name itself is a hint, you know.

Indeed it is. But, history and facts don’t matter to this contemptible crowd. These are the same idiots who preach that Jesus was a “Palestinian.” No propaganda slogan or assertion is too dishonest, or, too brazen, for these reprobates to disseminate.

What a FARCE! How could Jesus have been “palestinian” when it was the Russians in 1972 who dreamed up that FAKE name out of thin air ? Jesus was 1,000% Jewish. and anyone with even half a brain knows that.

Don’t these morons understand how this chronological thing works?

Here’s what we do know: We NEVER should have closed all those insane asylums!

Furthermore, those with IQ’s in the single digits should never be able to hold power in ANYTHING.

Savages acting savagely. How novel. Did anybody tell them there is documented and archaeological proof that Israel has been there for well over 3,000 years? A subscription to the magazine Biblical Archaeology might show them that.
.

Speaking of archaeology, the Pool of Siloam has been partially excavated and will be fully excavated not long from now. What will they say about this?

Jews were living in the middle east for millennia before the founding of the supremacist, totalitarian, belligerent and hate-filled ideology of “Submission,” but, objective facts and history are decidedly inconvenient to the fallacious, revisionist, Judenrein history being peddled by utterly vile and evil European, Leftist dhimmis, American Dhimmi-crats and their Jew-hating Muslim supremacist/terrorist allies, and, are thus ignored.

The dhimmis’ slavish parroting of Arab Muslims’ contrived propaganda mythology of alleged victimhood/grievance at the hands of Jews cannot be allowed to be undermined.

The UN is a cesspool of anti Semitism

The UN is where anti Semitism thrives

Can’t we all just get along?