The Republican proposal would tie the tapping of the SPR to sensible policies designed to help the nation’s energy independence and security. 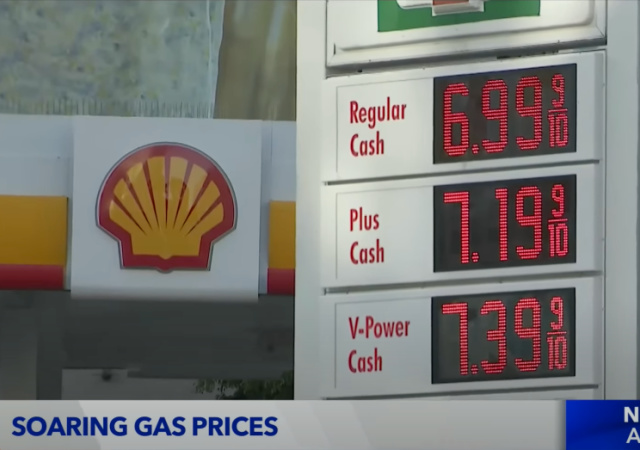 The Strategic Petroleum Reserve (SPR) fell to its lowest level since 1983 last week as U.S. gasoline prices and oil prices ticked up, according to federal data released Wednesday.

The level of the SPR — an emergency stockpile of crude oil managed by the Department of Energy (DOE) — declined to 375.1 million barrels last week, marking the first time it has fallen below 378 million barrels since December 1983, according to the Energy Information Administration. Prior to last week, the reserve’s lowest level since 1983 was recorded on Dec. 30, 1983, when it hit 378.3 million barrels.

House Republicans seek to protect the SPR in the first set of bills they’re expected to take up once they can start legislating.

While their legislation is unlikely to make it through the Democrat-led Senate and past President Biden, including these bills among the first of the new Congress signals that the nation’s oil reserves will be a key policy priority for the GOP.

On Friday, Rep. Steve Scalise (La.), a key Republican leader, released a list of “meaningful, ‘ready-to-go’” bills that will be the first that the party takes up, including two bills related to the strategic oil reserves.

“These commonsense measures will address challenges facing hard-working families on issues ranging from energy, inflation, border security, life, taxpayer protection, and more,” he said of the 11 total bills in a dear colleague letter.

The Republican proposal would tie the tapping of the SPR to sensible policies designed to help the nation’s energy independence and security.

The party is slated to take up two bills aimed at future oil releases: one that would prevent new releases of SPR oil unless there is a plan in place for more leasing for new oil and gas drilling on the nation’s public lands and another that would prevent SPR barrels from being sold to entities under the ownership, control or influence of the Chinese Communist Party.

“We wanted to start with some things on [SPR] which we’ve seen President Biden raid to cover for his failed policies,” Scalise told reporters.

Scalise added that Republicans will be “doing a lot of bills to lower energy costs and have a good energy strategy that allows us to create our own energy” but said committees like Energy and Commerce and Natural Resources would have to do work on those.

Of course, work can’t start until a Speaker of the House is selected. Here’s hoping for the best possible result.

When the President changes the Strategic Oil Reserve it would be nice if we heard what gets strategically better from doing this.

Slush fund, sludge fund, what difference does it make?

My gas is down 20 cents a gallon since election day. Must be a regional thing.

“”prevent SPR barrels from being sold to entities under the ownership, control or influence of the Chinese Communist Party.””

Meaningless. If you’re selling oil to China, it’s all coming out of the same pot.

How about we wait until we get oil independent again and get the prices down before the taxpayer gets slugged to refill the SPR?

Or is that too much to ask?

Oh, and how about a full accounting as to who Biden sold (or gave) the gas to and for how much?

where did that huge amount of SPR disappear to that went (first) to a port in the Netherlands not all that long ago.

The SPR is a huge part of being energy-independent. Germany didn’t lose because they didn’t get an A bomb first. They lost on several fronts because they ran out of gasoline. Obviously, we don’t want to be Nazi Germany but we want to be prepared if it’s us against the world, especially if China has everyone else under their thumb.

Filling it should be a priority and Biden was happy to deplete it so we could be more dependent on China. Every American who actually enjoys being an American should want to pay the cost to both fill it AND protect it.

Lastly, reading comprehension is your friend as they aren’t talking about a quick fill. It literally says that they want to force the executive branch to tie SPR tapping to domestic drilling (literally the first thing you are complaining about). Further, they want to expose corrupt deals, particularly back-funneled to China (literally the second thing you are complaining about). See below.

“The party is slated to take up two bills aimed at future oil releases: one that would prevent new releases of SPR oil unless there is a plan in place for more leasing for new oil and gas drilling on the nation’s public lands and another that would prevent SPR barrels from being sold to entities under the ownership, control or influence of the Chinese Communist Party.”

Of course, none of this will get passed. However, the rowdy faction on here should actually be quite pleased with this if they weren’t so busy finding things to be angry about. This is very similar to what they want with the term limits legislation proposals.

Not without a House speaker they won’t.

The Freedom Caucus in the House may want energy independence and a full SPR, but what does the GOPe and McCarthy want?

. . . and another that would prevent SPR barrels from being sold to entities under the ownership, control or influence of the Chinese Communist Party.

Snicker . . . which would mean that the Biden regime could sell oil from the SPR to third parties that could then in turn sell it to “entities under the ownership, control or influence of the Chinese Communist Party”s without legal penalty. And yes, I think the Biden regime would engineer such a trick just to do it.

What needs to be done is prohibit the sale of any SPR oil to any companies that are under the ownership, control or influence of any foreign parties whatsoever. The idea being that the SPR is for the use of the United States and not to be sold to any foreign country or foreign controlled company. Period.

Once again, meaningless. Oil is fungible. It doesn’t matter which tank you take it out of, it has the same effect on the total supply.

Yea, I have a great deal of confidence in the big brains that can’t even vote in a SotH after 10 votes.

GA has not had state taxes applied to fuel for the past year ans a half. That will change on January 11th. Regular gas will jump almost 40 cents per gallon and Diesel will see a 30 cent per gallon jump.

IMO The government should not make more than the petroleum company off a gallon of fuel.

Here we go again proposing bills that can’t possible pass. The Republican house needs to focus on the money, it’s where their real power is. No money for any government agency until house Republicans get what they want. No more Omnibus legislation.

The SPR numbers are wrong.
In previous legislation in order to fake the cost of legislation, they included selling of millions of barrels from the SPR.
They may be listed in the inventory, but they are gone.
Not sure if it’s all just accounting or if someone else owns it and it’s just stored with ours or if it is earmarked to be sold.