German police: The 32-year-old Iranian man is “suspected of having prepared a serious act of violence … by procuring cyanide and ricin to commit an Islamist-motivated attack.” 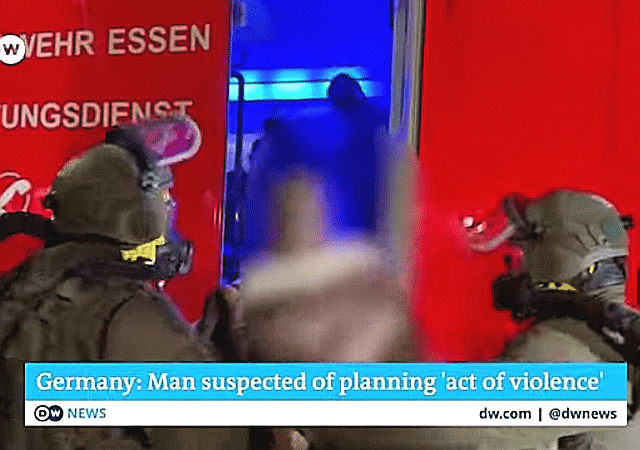 German police have arrested an Iranian national on suspicion of planning an “Islamist-motivated” chemical attack. The alleged 32-year-old Iranian jihadi, along with a suspected accomplice, was caught near the western German city of Dortmund as he tried to precure highly-toxic cyanide and ricin for a terrorist attack, German newspaper Die Welt reported Sunday.

Police said in a statement that the Iranian national is “suspected of having prepared a serious act of violence that endangers the state by procuring cyanide and ricin to commit an Islamist-motivated attack.”

The suspected Islamist duo was literally caught with their pants down. The two men were seen being “whisked away into a police vehicle in their underpants and jackets wrapped around them in a makeshift manner,” the German daily noted.

The news reports indicate that the Iranian man might have gotten his hands on toxic chemicals required for a terror attack. “Specialists wearing anti-contamination suits were seen carrying evidence out of the man’s home,” the AP News reported.

Anti-terror investigators have arrested a 32-year-old man in Castrop-Rauxel in the northern Ruhr region, who is said to have plotted an Islamist attack. The Iranian national is suspected of having acquired the toxins cyanide and ricin for the crime. This was confirmed by the police departments of Düsseldorf, Recklinghausen and Münster on early Sunday morning.

On Saturday night, the investigators carried [out the raid] at around midnight. The scene was cordoned off over a large area. Police, fire services and rescue workers were at the site in large numbers. “We received a serious warning that prompted the police to act that night,” said North Rhine-Westphalian [State] Interior Minister Herbert Reul (…) said.

According to information received by Die Welt, a “secret service from a friendly [nation]” may have warned the German security agencies on the threat of a chemical bomb attack. The Bild [newspaper]  reported that it was the FBI.

The news should not come as a surprise to anyone. The U.S. State Department classifies Iran as the “world’s worst state sponsor of terrorism.” Iran’s Islamic Revolutionary Guard Corps (IRGC) and its proxy Lebanon-based terrorist group Hezbollah have long been active in European countries, including Germany.

Germany’s open borders policy toward illegal immigrants has made the situation only worse. The country is now home to some 1250 suspected Hezbollah members, German domestic intelligence agency estimated in its annual report released in June 2022.

While exporting terrorism abroad, the Iranian regime continues to terrorize its own population.

On Saturday, the Mullah regime hanged two more men arrested during the ongoing anti-regime protests. The men put to death after a sham trial were identified as 22-year-old Mohammad Mehdi Karami and 39-year-old Mohammad Hosseini.

The Revolutionary Court, which primarily handles cases related to Sharia blasphemy laws and opposition to the Shia-Islamic regime, based the death sentences on ‘forced confessions,’ news reports say. “The tribunals don’t allow those on trial to pick their own lawyers or even see the evidence against them,” the AP News reported Saturday.

The latest round of hangings raise the protest-related executions to four. Last month, two protesters, both aged 23, were executed for the crime of waging “war against Allah and His Apostle.”

These innocent idealistic young men put their lives in danger for democracy in Iran. We are mourning as a nation. Help us save others pic.twitter.com/rpjH5GzkrR

Nearly 500 Iranians have been killed amid the deadly crackdown by the Islamic Guard (IRGC) and other regime-loyalist militias. The nationwide protests erupted in mid-September after the death of a 22-year-old Iranian woman in the custody of the Sharia-Morality Police. More than 12 protesters have been sentenced to death and over 18,000 are languishing in prisons for daring to rise up against the regime in recent months.

Couldn’t pin this one n the right eh 🤣🤣

Are neighborhoods In the northern Ruhr still working class and productive? Or is the area now a rundown immigrant-welfare fiefdom.

But . . . but . . . us infidels are constantly told that islam is the Religion of Peace™ and would never commit such atrocities. So those arrested must be the mythical creatures known as “radicalized moslems” that we all hear about and not truly representative of islam or moslems in general, right? Right?!??

It’s because they are victims of the white man.

Wait so police offices efficiently do their jobs with professionalism and efficiently and stop terror attacks with no loss of life without the Patriot Act eliminating the constitution of their respective nations, and without an FBI mainly focused on elimination of one of the two parties of a two party system?

Next thing you will tell me terror attacks are foiled by the NYPD and Time Square and that there hasn’t been a single example of the FBI needing the Patriot Act for anything besides trying to suppress the Republican Party.

I am overjoyed by the success of German police officers today and believe they have shown us the true path in throwing out fascistic abridgments of liberty that do nothing to keep us safe.