Palestinian Arabs have zero connection to the artifact. Yet the Biden administration appears to buy into Palestinian myth that Arabs are the indigenous inhabitants while the ancient Jewish people never existed. 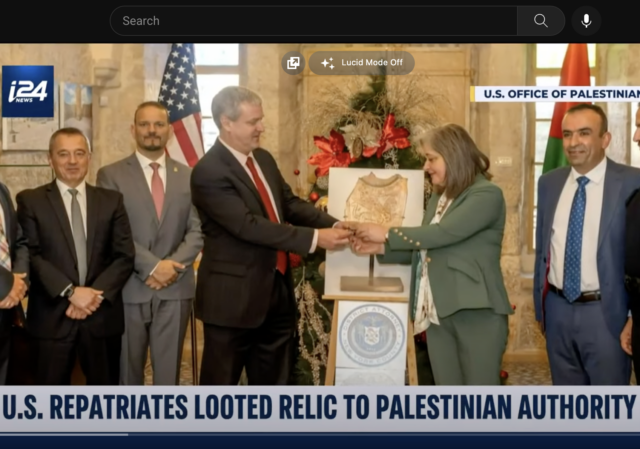 Under that principle, one might have expected the United States, or even the Manhattan District Attorney’s Office, to repatriate a 2,700 year-old Judean artifact to the Jewish State, Israel.

One would have been wrong.

Today we announced the repatriation of a nearly 3,000-year-old antiquity to the Palestinian Authority, marking the first time a cultural object has been returned to the Palestinian people from the United States. Read more here: https://t.co/7NmJJ64SdI

Instead, the office of woke D.A. Alvin Bragg and federal officials from U.S. Homeland Security Investigations (“HSI”) and the U.S. State Department “re”-patriated it to the Palestinian Authority.

As reported by JNS:

The artifact was seized from Jewish-American billionaire Michael Steinhardt as part of a criminal probe in New York. As part of a deal to avoid prosecution, Steinhardt agreed in late 2021 to turn over $70 million worth of stolen antiquities that authorities claim were illegally acquired in Israel.

Officials say the cosmetic spoon first surfaced on the international art market in January 2003, when Steinhardt bought it from an Israeli antiques dealer who has been accused of dealing in illicit Israeli and Middle Eastern antiquities.

There is no indication as to what makes this object culturally Palestinian. Yet the head of the U.S. Office of Palestinian Affairs, George Noll, stated that his office “is proud to facilitate the return of this rare antiquity, an example of Palestinian cultural patrimony.”

The artifact is an ivory cosmetic spoon, etched with a winged figure on one side. Objects of this type were used to pour incense onto fires during rites for gods and the dead. The item dates to between 800 B.C.E. and 700 B.C.E., during the time the Neo-Assyrian Empire dominated the region.

According to the online Smithsonian Magazine, the spoon was from the Khirbet al-Koum area in Hebron. Khirbet al-Koum or el-Qom is an archaeological site in the West Bank, in the territory of the biblical kingdom of Judah, between Lachish and Hebron. (A press release from the Manhattan District Attorney’s Office spells it El Kom). The New York Times and Almayadeen reported more vaguely that it was likely from Hebron.

Hebron is about twenty miles south of Jerusalem. Jews lived in Hebron continuously for some 3,000 years, until the 1929 Arab pogrom drove them out. Sixty-seven Jews were murdered, and the survivors fled. After the Six Day War in 1967, Jews returned and re-established Hebron’s Jewish community.

Arabs conquered the region during the seventh century C.E., or some 1,300-1,400 years after the time to which the artifact is dated. According to the Jerusalem Center for Public Affairs, “To this day, the PLO regards itself as pan-Arab… The first article in the 1964 Palestine Liberation Organization’s Charter declares ‘Palestine is an Arab homeland bound by strong Arab national ties to the rest of the Arab Countries and which together form the great Arab homeland.’” Hamas has linked the Palestinians’ origins to Egypt and the Arabian Peninsula.

In other words, Palestinian Arabs have zero connection to the artifact.

More recently, the Palestinian Authority has found it expedient to deny Jewish history and to present Palestinian Arabs as the supposedly indigenous people of the land. The P.A. has even gone so far as to claim Jesus was a Palestinian (a venture which Israel-hating politicians like Ilhan Omar are happy to endorse), and to deny that a Jewish Temple ever existed on Jerusalem’s Temple Mount. Their political allies in the United Nations have succeeded in passing resolutions that refer to the Temple Mount solely by its Muslim title (Haram al-Sharif) and completely ignore its Jewish connection.

Palestinian denial of Jewish history isn’t just theoretical. The Palestinians have a track record of physically obliterating archaeological evidence of Jewish history. The waqf controlling the Muslim compound on Jerusalem’s Temple Mount brought in bulldozers in 1999 to dig a pit, and simply threw out the debris without making any effort determine whether it contained anything of historical value. Such evaluations are standard practice in construction projects in many places where there is much less reason to believe anything of historical value exists.

Tragically, the Biden administration and its woke allies at the state level seem to have joined the Jewish history deniers. By turning over a Judean artifact to those who deny Jewish history and are trying to destroy it, instead of turning it over to the Jewish State, the Biden administration has fed the pernicious myth that the Palestinians and not the Jews are the indigenous people of the land.

That would be like somebody robbing your house while you were away. You return and find squatters living there. But before that’s resolved, the police recover the stolen items and return them to the squatters.

A. A Muslim who wants to kill all Jews and eliminate the State of Israel and who will then move on to kill all non-Muslims.

…a “Palestinian” is an Arab that lives in Israel and pretends to be a descendent of the Philistines, basically Greeks that went extinct before Islam existed.

Palestinian: A wandering tribe of goat and sheep herders centered in lands comprising the Middle East from modern day Turkey to Egypt. Currently residing in Israel after crime, fighting and bloodshed caused them to be thrown out of various countries such as Jordan, Lebanon and Egypt. Known for being a proxy state of Iran and The UN to attack Israel and turning down every peace deal offered by Israel to stop attacks. See also Terrorism, 1972 Munich Olympics, bus bombings, grade school shootings, rocket attacks.

Islam states that the Bible is incorrect and that one day Allah will correct it. So, are the parts of the Old Testament incorrect about Judea being part of ancient Israel?

Islam would say that wouldn’t it. Islam doesn’t have the evidence and just says their guy will straighten it out later. Fine. They should get out now, and when their guy arrives to clarify things, then we’ll talk.

How’s that working out for every one?

I hate this government

One of several reasons I suppose that the Israeli government is moving away from us, going strictly neutral in Ukraine, etc. How can they respect us?

I wonder if Democrats believe Jews are the ‘real Jews.’

I don’t think Democrats have enough time to think anything of Jews outside of hatred.

What a slap in the face for Jewscand Israel. I hope you SOB Jews who voted for Brandon that you are pleased that the Brandon Administration has denied your past. They have bought into the antisemitic canard that current Jews are descended from the Khozars.

Jack, the name-calling is un-called for. If you’re going that route, we can condemn the “SOB Christians” who also voted for Biden, because there are certainly more of them.

Sure… but they get their own slaps. Not this one.

We are talking about a Judean artifact being given to Arabs who deny that Jews have any connection to the Land of Israel and would like to destroy every last one of them. There is no involvement of Christianity in this except very tangentially (the Jewish roots of Christianity). That is why I blew up at the Jews who voted for Brandon. By the same token, Christians who hold true to their Christianity should be very upset with a supposedly Christian President supporting abortion. But this is a column about Judean artifact which is why I did not mention Christians voting for Brandon.

All fine, except the voting part had nothing to do with the outcome. Actually nothing.

Dominion is not a Jewish company as far as I know.

Now, which is more antisemitic: This or Kanye West saying he likes Hitler?

Yes, be upset at both, but be honest in recognizing that what Biden is doing is far more damaging to Jews than Kanye West spouting dumb shit.

The P.A. has even gone so far as to claim Jesus was a Palestinian

This is hardly surprising, since the Quran itself proclaims Jesus was Muslim.

Many people are confused over Jesus’ identity. I’ve met Christians who insisted he was a Christian.

This is such despicable and evil dhimmitude from the vile and contemptible Dhimmi-crats. Enabling and granting deference to Muslim terrorists’/supremacists’ brazen historical revisionism and their attempts to erase Jews’ historical ties to the middle east — ties which pre-date the founding of the supremacist, totalitarian and belligerent ideology of “Submission,” let’s note. This is truly evil stuff.

Brandon & Co are still angry those pesky Israeli’s re-elected Bibi who just won’t go away and let Islamist’s take over all of the Middle East.

Taking a different tact here, doesn’t seem to be Jewish so not theirs, can’t be Palestinian because they weren’t there.

It was found in an area controlled the Kingdom of Judah. The Judahites are the direct ancestors of the Judeans who reestablished the province of Yehud in Jerusalem and around and launched what would go on to found the Judean state in Judea, Samaria and the Galilee and parts of the trans-Jordan. It is primarily from those Judeans that Jews today descend, including those in the modern state of Israel. So by rights, that Judahite artifact should have been handed over to Israel, not to a terrorist group that has no historic connection to the Land of Israel and who would like to wipe out all the Jews there who do.

Fully agree it’s not the Palestinians,

Then it should go back to the guy who bought it and owned it for decades.

Anyone else get the notion that Obummer likely had his fingers in this decision?

Bummer gets blamed as a proxy for the Deep State too often.

He’s really bad and he brings bad people along with him. So I’m not sure it’s “too often”. Could be, could be not often enough. He did promise to “fundamentally change America” and he was subversive against America for his entire presidency.

There never was a Palestinian nation in antiquity

If the US government believes the Palestinian Arabs lived in Judea 2700 years ago, then we know they have disdain for Jews and history in general. Unless they really think this is accurate history.

It’s a small thing, I suppose. A small thing that’s might be little time bomb under Christianity too, among other heresies,

Erasing Jews and Christians from the area takes Muslims off the hook for commencing the apocalypse, according to instructions in their book. Whew, amirite?

But, it raises the possibility that their whole book is wrong. If Arabs are Palestinian natives of Judea and not conquerors from Arabia, was Mo a Palestinian? Is Mecca actually the West Bank?

When Bragg goes to visit jihadistine, they will honor him by inserting the spoon in the Obama of Arafat’s remains, and then Bragg will lick it as a show of solidarity with his fellow enemies of the Judeo-Christian Capitalist West.