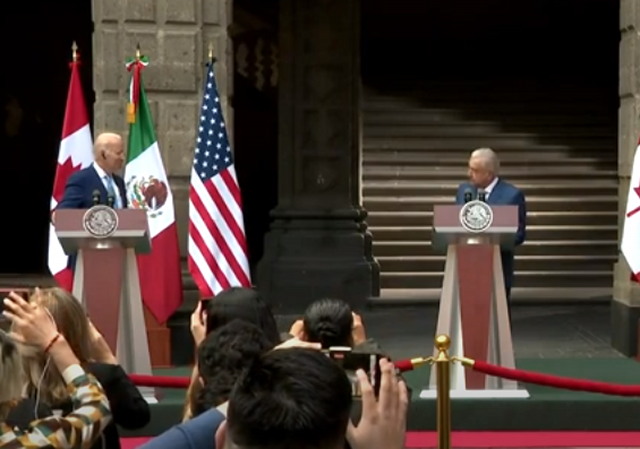 Mexico’s President Andrés Manuel López Obrador is seemingly a big fan of Joe Biden, or his border policies, at least.

During the summit in Mexico City this week, he thanked Biden for not building any more of the border wall.

Mexican President Andres Manuel Lopez Obrador used his microphone as host of the 10th North American Leaders’ Summit to criticize former President Donald Trump and other Republicans over their immigration policies amid a surge in illegal border crossings.

During his opening remarks at the post-summit press conference, Lopez Obrador expressed his gratitude toward President Joe Biden for being the first U.S. president “in a very long time” who “has not built even 1 meter of wall” between their respective countries. Canadian Prime Minister Justin Trudeau was also present.

“We thank you for that, sir,” Lopez Obrador said Tuesday in Mexico City, according to translators. “Although the conservatives don’t like it.”

Lopez Obrador, who has repeatably spoken frankly to Biden in front of reporters during the two-day summit, went on to encourage his counterpart “to regularize the migration situations of millions of Mexicans” who have been working and living in the United States and “contributing to the development of that great nation.”

During a roughly 24-minute response to one reporter’s question, a much longer answer than any of those provided by the other two leaders, Lopez Obrador criticized Gov. Greg Abbott (R-TX) for busing and flying immigrants around the country.

“This is completely inhuman,” he said. “This should not be done.”

Apparently, no one told him that Biden also flies immigrants all over the country.

Mexican President Andrés Manuel López Obrador to Biden: "President Biden, you are the first president of the United States in a very long time that has not built, not even one meter of wall, and that, we thank you for that, sir." pic.twitter.com/kaHbBFwn4F

Of course, there is one wall that Biden is building. The one around his beach house.

Biden IS building a wall… at his Delaware beach house https://t.co/LYSawqfYCO

Gotta keep the riff-raff out, right?

Well, then, if he says so that makes it right!

The fascists are having their day.

This beaner, Mexican, tinpot despot doesn’t even have enough gratitude and respect to word his thanks in the imperial system. We are Americans! We like things big! Metric is for sissies.

Why do you repeatedly embarrass yourself with your cringeworthy attempts at humor here and just consistently reveal what a jackass you are?

You’ll be sorry. When we finally do get it finished, we ARE going to make you pay for it.

We could make them pay for it right now, if we had a government willing to take the step. A few rounds of automatic weapons fire directed into the river short of the next group of “migrants” might send a message to stay in Mexico and let them deal with the problem for a change.

Thanking Biden for not building the wall?

Just have a commercial of him saying that to Biden and then show nothing but mass groups coming across the border.