NYC Mayor Eric Adams Says There’s No More Room for Migrants in the City, Demands Biden Do Something

NYC Mayor Eric Adams Says There’s No More Room for Migrants in the City, Demands Biden Do Something

“This is a national emergency and crisis that must be addressed.” 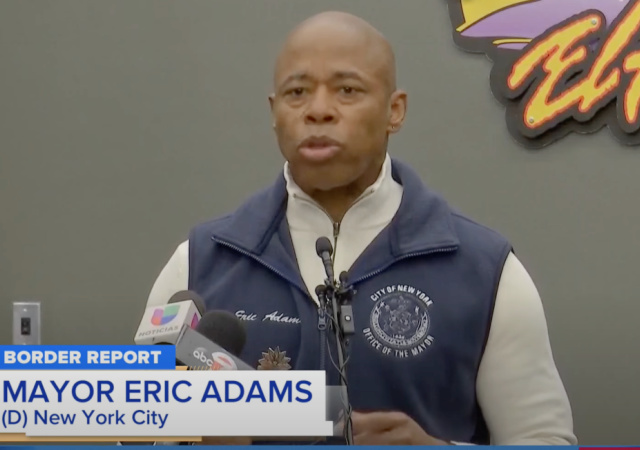 In El Paso, Adams said New York City has no more room for the migrants. The New York Post confirmed the lack of space:

The influx of migrants into New York has gotten so bad that overfilled transient hotels are telling desperate refugees they should go back to the bus station for further guidance — and the city is scrambling to open more shelters.

“The shelter is at full capacity,” one couple was told Friday at the Stewart Hotel on Seventh Avenue – which is supposed to be one of the city’s four Humanitarian Emergency Response and Relief Centers.

The family, who traveled from Ecuador with two young kids, told The Post in Spanish that they were directed by hotel staff “to go to 41st and Eighth, Port Authority.”

Adams made the announcement in connection with websites he claims tell migrants everything they would ever want in NYC:

“We learned today, which was very informative and that’s why it was important to come here, that there are websites that are advertising that New York City….basically the streets are paved with gold. That there’s automatic employment, that you’re automatically going to be living in a hotel,” Adams said.

“There’s a conversation among those who are asylum seekers and migrants who are given the false impression that if you come to New York City, everything is fine. We have to give people accurate information.

“And that is what some of the centers are doing here. They are truly explaining to people that this is what is happening in New York right now. In New York, you go there, you’re going to be living in congregate settings, that there is no more room in New York. That should be coordinated by our national government.”

Adams also placed a lot of pressure on the Biden administration, pushing Congress to reform the American immigration system:

Adams, who was flanked by El Paso Mayor Oscar Leeser, said he’d like to see FEMA appoint a leader who will coordinate the response among cities seeing a large number of migrants arrive at their doorsteps.

“This is a national emergency and crisis that must be addressed,” he said while calling on Congress and the president to enact immigration reform.

It’s so weird. The Democrats controlled the House, Senate, and White House for two years. Two freaking years and no one did anything. Instead, the administration always said the border was secure.

We’ve seen record numbers monthly since Biden took over in January 2021. Encounters, gotaways, and people coming from countries other than Mexico.

Mayor Adams says, “Send them to Florida. They have plenty of room down there. 350,000 people have moved here from Florida in the past year. We are just overwhelmed with all the southern people coming up here to live.”

Did he actually say that? If so, double the buses to NYC immediately!

“In all, the New York metropolitan statistical area lost 83,400 net residents to Florida in that time period [five years]… Florida has attracted 140,000 [gross] of these New Yorkers to its swampy shores with its absence of state income or payroll taxes…”

I hear the Hamptons are nice, and lots of homes are unoccupied for the winter….BIG homes.

How about Hawaii? I hear there’s some construction going on for an ex president who was such a stalwart fan of illegal immigrants.
Plus as an added bonus the zuckerberg estate has tons of room for illegals to squat.

Are you kidding? I have it on good authority that Hawaii would tip over

It has already tipped over. It has been upside down for several years now.

“there are websites that are advertising that New York City….basically the streets are paved with gold. That there’s automatic employment, that you’re automatically going to be living in a hotel,” Adams said.

And they wandered in from the city of St. John /
Without a dime /
Wearing coats that shined both red and green /
Colors from their sunny island /
From their boats of iron they looked upon the promised land /
Where surely life was sweet /
On the rising tide to New York City /
Did they ride into the street /

See the glory /
Of the royal scam /
…
Now the tale is told by the old man back home /
He reads the letter /
How they are paid in gold just to babble in the back room /
All night and waste the time /
And they wandered in from the city of St. John /
Without a dime /

See the glory /
Of the royal scam…

This was the plan all along with the Biden* administration. Create utter chaos through lawlessness, so that the populace demands the federal government DO SOMETHING™. And when they do, further tyranny ensues.

Cloward and Pivening us to death.

“There is no room here,” says Mayor Adams. “We’re just a little town with a small budget and limited resources and are not used to handling immigrants. They will have to be sent to a bigger town somewhere else that has a bigger budget and more resources than New York City.”

Bragging about being a Sanctuary city has consequences.

Can’t bring himself to say “we are no longer a sanctuary city, please stop treating us as if we still are”. He wants the relief while keeping the virtue signaling. I’d say, double the buses.

“Give me your tired and your poor..” changed to “Enough is enough.”

“If You are going to San Francisco, be sure to wear some flowers in your hair” changed to “Give me repartations.”

Adams voted for Biden and should be showing a lot more support for his border policies. Get behind it, Man!

Seems like New York City is having an awful lot of ‘bad luck’ in the last few years.

All Adams has to do is to say NYC is no longer a “sanctuary city”, to stop making that false promise of sanctuary and care. Be honest.

But Dems can’t be honest if it’s off-message. Liars, fundamentally dishonest scum, I don’t care about what he says. His words are worthless.

It’s still a sanctuary city. Alvin Bragg says, “Give us your poor, criminals and we’ll take good care of them.”

Here’s a coordinated federal policy that would bring real help.

Stop the leakage, and Remain in Mexico for asylum claims, almost all of which are phony.

Biden’s policy is to open the border and let them in. All of them. And immediately thereafter assume no control over them—because it’s a free country and they can go where they want. As Biden explained it to Corn Pop: “Once they’re in, it’s the states’ problem.”

It’s a good point, that the dems had all branches for two years and did nothing on “reforming” immigration.

Balkanize. Get rid of the civil rights acts so we have freedom of association, etc., again. Anything so we don’t have to live next to culturally completely different foreigners, PLUS give them everything under the sun from the sweat of our brows.

Put the migrants up at the Plaza Hotel. When that’s full put them at the Novotel. Keep going until the Manhattan hotels are full, and then start on the AirBNBs.

Not practical? Well then, you’ve just discovered what the good people of El Paso have known for quite a while.

I reject the premise that they’re asylum-seekers. Words mean something.

Time for Greg Abbott to load up a few more busses and send them to Gracie Mansion.

This was always the end game when Abbott started sending busloads to leftist sanctuary cities, making them put their money where their mouths were. There’s a lot more pressure on Biden’s Administration to actually do something about the border when it’s coming from his biggest constituencies.

Indeed. Amazing how a few thousand illegals broke the back of several sanctuary cities when those same virtuous cities with their oh so enlightened leadership elected by all the best people who are so much better than the gun toting, bible bashing rubes in icky red States came face to face with the consequences of their decisions.

Get bent. Either repent or STFU and open up some of the vacant commercial real estate in your post Covid reckoning. Lots of financial firms laying off people so there’s going to be even more room for downtown offices to be converted to house the illegals you championed.

Where are all the “no one is illegal” and “hate has no home here” folks? Just publish their home addresses and ship the illegals there.

Just have the buses tour the proper neighborhoods, and let off one family at each house with a rainbow “In this house we believe” lawn sign.

Funny what a few busloads of illegals will do to clarify the mind.

Especially considering the whining and complaining from some quarters just a month or two ago, claiming that those few busloads were just a token effort and that Abbott was doing nothing about the border.

We’ve established that there are no Democrat mayors or governors in the first category, and fewer than a half dozen in the second, including the El Paso mayor, Colorado governor, and now Adams.

But this is what you wanted, Adams. In the election last year each and every one of you Democrats wanted New York to be a sanctuary city.

“Every single one of the eight Democrats running for mayor vowed to protect illegal immigrants from deportation, solidifying the Big Apple’s often infamous status as a “sanctuary city.”

The mayoral wannabes doubled down on current Mayor de Blasio’s approach of barring local authorities from reporting the immigration status of residents to federal authorities during their second televised debate on WABC-TV Channel 7 Wednesday.”

Why are you complaining? You got your wish. Be a sanctuary, like you promised.

“And it came to pass in those days, that there went out a decree from Caesar Augustus that all the world should be taxed…”

Adams is full of it. NYC has been importing immigrants for a couple of centuries. There’s always room for a few more.

Most American cities are run by useful dummies like this character.