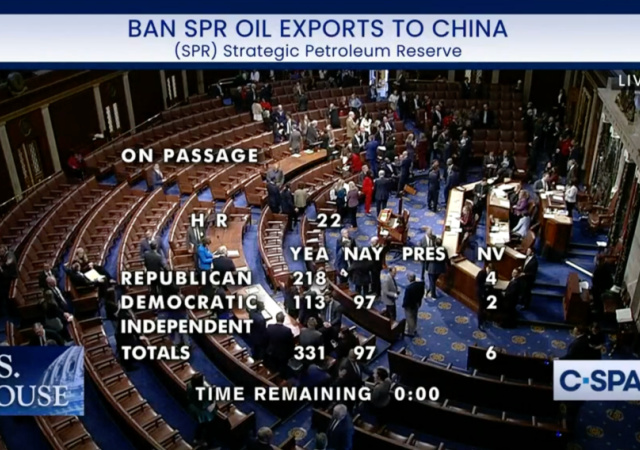 Every Republican and 113 of 219 voting Democrats passed a bill that bans President Joe Biden’s administration from selling oil reserves to China.

SEC. 2. PROHIBITION ON SALES OF PETROLEUM PRODUCTS FROM THE STRATEGIC PETROLEUM RESERVE TO CHINA.

Notwithstanding any other provision of law, the Secretary of Energy shall not draw down and sell petroleum
products from the Strategic Petroleum Reserve—

(1) to any entity that is under the ownership, control, or influence of the Chinese Communist Party; or

(2) except on the condition that such petroleum products will not be exported to the People’s Repub12 lic of China.

The House clerk has all of the votes. A few significant Democrats who voted YAY/AYE:

In April, the Energy Department announced it would sell around 950,000 barrels from the Strategic Petroleum Reserve to Unipec America, a Chinese company based in the U.S:

Biden’s Energy Department in April announced the sale of 950,000 Strategic Petroleum Reserve barrels to Unipec, the trading arm of the China Petrochemical Corporation. That company, which is commonly known as Sinopec, is wholly owned by the Chinese government. The Biden administration claimed the move would “address the pain Americans are feeling at the pump” and “help lower energy costs.” More than five million barrels of oil released from the U.S. emergency reserves, however, were sent overseas last month, according to a Wednesday Reuters report. At least one shipment of American crude went to China, the report said.

The Biden administration also claimed the Unipec sale would “support American consumers and the global economy in response to Vladimir Putin’s war of choice against Ukraine” and combat “Putin’s price hike.” But as the war rages on, Unipec has continued to purchase Russian oil. In May, for example, the company “significantly increased the number of hired tankers to ship a key crude from eastern Russia,” Bloomberg reported. That decision came roughly one month after Unipec said it would purchase “no more Russian oil going forward” once “shipments that have arrived in March and due to arrive in April” were fulfilled.

Rep. Cathy McMorris Rodgers (R-WA), who will chair the House Energy and Commerce Committee, introduced the bill because the SPR “is meant for true energy supply disruptions, like those caused by hurricanes and natural disasters, not to help China.”

McMorris Rodgers claimed selling the reserves “to China is a significant threat to our national security” by weakening our ability to respond to emergencies and strengthening “the oil reserves of our most dangerous geopolitical adversary: The Chinese Communist Party.”

The bill heads to the Democrat-controlled Senate. Who knows how they will vote.

Restrictions on ownership of mineral deposits, mining, oil and gas deposits would make more sense. Farmland isn’t depleted in the same way as extraction of minerals or oil/gas. We can always seize the farmland and put it into production if we had to which can’t be done with a depleted mine or oil deposit.

Clearly, China is acting cheap. Gonna have to pony up a little more the under-the-table money if they want those democrat votes.

They got 97 votes, better check their income revenue

Interesting how this can be passed after the left is out of power but not before.

Yep. Dems got to look better and it was understood the vote didn’t hurt their core interests, which appear to include the CCP. Good job by McCarthy whipping the vote on the Rep side so that would pass anyway.

Idiotic. The news should be explaining why that doesn’t matter. It’s cheaper to use the money China pays for the oil to buy imported oil on the east coast than to ship the west coast oil across the country to the east coast. The effect is that China was not involved and the reserve oil went to the east coast.

But the oil doesn’t originate on the west coast. There’s a little pumping in California, which Newsom is shutting down, but the bulk of our oil comes from the GOM and from shale fields, and shipment to the east from there is easier than to the west.

Besides we need to bring China down a few pegs diplomatically.

About time… To recognize China as an adversary: Militarily, Economic, and Cultural.

Who in the US govt., and I mean naming names at the worker-bee level, had anything to do with setting up an oil sale to the ChiComs?

Because those are names who need to 1) be fired at a minimum and 2) never allowed near a govt. job at any level again.

Classic shell game crap from the government like when states like California claim that they need new taxes that will be spent on schools. Then when the tax is in place, they spend THAT money on schools, and take other money that WAS going to schools and spend it on their pet projects. So now your taxes are higher and the schools get the same amount of money.

The only thing that’s going to happen is the SPR oil is going to go to non-China places, and they’ll redirect the non-SPR oil back to China.

Its just a shell game by the government.

Right. You have X amount of oil from all sources. It doesn’t matter what part of X is sold to the Chinese.

Isn’t the bigger issue using the SPR at all when there isn’t a flipping external crisis? The SPR is a National strategic resource to be used in emergency scenarios created by external forces, not for hardship created by stupid policies of our politicians who don’t want to face PO voters. It isn’t a take one/give one penny jar on the counter of a convenience store, which is how some seem to view it.

That ship sailed when the cowardly RINOs let Obama do it PURELY for his poll numbers.

They let the precedent be set that a Democrat President can arbitrarily use it to boost their poll numbers whenever the heck they want. And I frankly haven’t heard a single prominent Republican even pretend they plan to stop it.

You and I ain’t prominent?/s

Of course – but that isn’t the subject of the discussion.

I don’t know much about Ro Khanna… but between this vote and his “seriously, what are you guys doing?” letter to Old Twitter, I’m wondering if he has has his feet set on the Tulsi Path of Enlightenment.

IMO, he’s attempting to position himself in the moderate, ‘I’m not like those other guys’ lane for a potential run Statewide or for President.

Will Schumer even let this bill get to the Senate floor for a vote?

One wonders with that kind of interest and support why Viceroy Nancy wouldn’t let this issue come up under her command?