Will McCarthy secure a win tonight? Grab the popcorn. 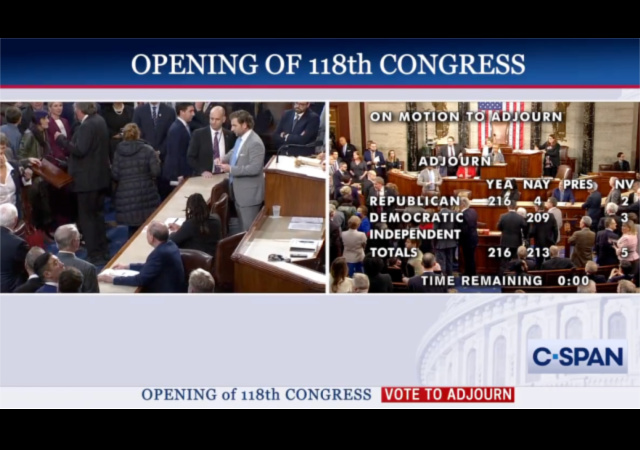 UPDATE: House adjourns until tomorrow at noon. Even voting to adjourn was a fiasco.

"On this vote the YEAs and 216. The NAYs are 214. The motion is adopted. Accordingly, the House stands adjourned until noon tomorrow." #118thCongress pic.twitter.com/VBw6u5hLrd

Here we go. The seventh round of voting starts at 8 PM ET.

Rounds four, five, and six ended with the same results. 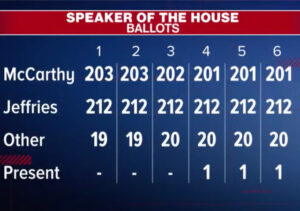 Maybe this deal will end it tonight?

McCarthy-aligned big spender CLF and right-wing Club For Growth say they have a deal to jointly support McCarthy for Speaker.

“CLF will not spend in any open-seat primaries in safe Republican districts and CLF will not grant resources to other super PAC's to do so,” it says. pic.twitter.com/p9FZ1QGtiD

Whether McCarthy eventually wins or not this entire saga just demonstrates what a pathetically WEAK leader and absolute political moron he is.

None of this was a surprise. He (and everybody else) KNEW that he didn’t have the votes, and apparently his ‘plan’ was just ‘call votes until they vote for me’.

And don’t even get me started on the insane optics of him declaring he had ‘earned it’, and just moving into the Speaker office KNOWING that he didn’t have the votes.

This entire saga demonstrates that McCarthy simply had no actual PLAN to be elected Speaker, and that he is absolutely the wrong person to be in charge at this time.

Put someone under the gun and you see their real character. McCarthy folded on Jan 6 like a cheap suit. Now he’s folding like a cardboard suit.

Enough of these GOPe clowns.

McCarthy easily got the hat trick at the three straight losses level. He’s now aiming for the Harold Stassen Award which he’ll tie at nine. At ten straight losses McCarthy will be in a league of his own.

Next up, qualifying for the Rocky Balboa Going-the-Distance Award at fifteen.

McCarthy isn’t 100 votes away, he’s less than 20 and he isn’t hemorrhaging dozens of votes every ballot. It’s been more or less the same count. If a holdout like Chip Roy says talks are productive, it’s a given than McCarthy will get the job.

Short by one vote or one hundred votes the result is the same. What is PO the DC establishment is that there are some populist right oriented members who have decided that they won’t be taken for granted.

The result is the same, yes, but the mass defiance against him simply is not there. And that’s important because if it’s not there, he’s ultimately going to win. There is no exodus to another candidate, most the holdouts are trying to get McCarthy to tend to their wants.

I’m not saying this as an endorsement of this creep. I’m saying that we conservatives aren’t truly represented.

“I’m not saying this as an endorsement of this creep.”

Let’s cut to the chase: this is all theater, and McCarthy will be speaker.

I don’t think this is ‘theater’. Rather, this is real damage to the GOPe. I think the rage will get worse if McCarthy is elected Speaker.

At this point, no I don’t think he will be. If I had to bet, I’d say he withdraws and another compromise candidate is picked.

He’s a mush. I think the 20 holdouts know that time is on their side.

Here’s another thought. I think there is a lot more opposition to McCarthy than those 20 reps. However, I think many others are voting for him to cover their butts and to give the appearance of support, but are counting on the 20 to hold firm.

Lets say 3/4 of the holdouts flip to McCarthy, that leaves five still refusing which is enough to keep McCarthy from winning. That’s not likely to go on forever and yes eventually they will probably give in. Where that point is and what McCarthy is forced to concede to get to that point is another question.

Lots of populist right voters are observing all this and some, for the first time, begin to understand which figures are on board with the populist agenda and which are more interested in not making waves that upset their grift and gravy train.

To be clear I understand your point and don’t classify your comments as placing you in the establishment wing on this question.

Disagree. Basically most of these reps aren’t leaders, and they refuse to address America’s sinking ship. Gaetz et al will hold out. We will get better. 70/30

Possibly, but this whole saga just demonstrates what a weak political ‘leader’ he is.

McCarthy can’t even get them to agree he should be in charge, how’s he going to possibly get Republicans on board to get anything passed?

Do you really think he cares about getting certain things passed? These people are in it for power. Even the rank and file members. They all have egos, they all get them fed one way or another. I’ve seen it up close and personal and it is disgusting. The guy I used to work for was a member of Congress for one reason only: so he could move up the food chain and get a high committee chair one day, or be governor or LG or AG. He was blocked on the state route, so he stuck it out in Congress and eventually became a powerful committee member who did absolutely nothing but get on TV a lot at the end of his career.

I can’t stand any of them. None of them work for the people.

Or, he could just be in it for the bucks.

100% yes but you need the power first. If he wins he’ll have money thrown at him (rather, his wife, or someone else close) 24/7. Nancy Pelosi got rich as speaker because her husband vacuumed it up for her. Same with Biden and his son.

It’s all about his vanity. What little man.

I think he’s really driven by his ROOMMATE and swamp polster Frank Luntz: WTF was a grown name in Congress doing living as a ROOMMATE of ANYONE, let alone that swamp fraud Frank Luntz??

I believe Gaetz is the real deal.

And I know his family already has $$…. Gaetz I mean.

Actually, I think his function as Speaker will be to “get Republicans on board to surrender on demand”.

Crenshaw is calling the 20 holdouts “terrorists” now. So cranky, Dan.

That was an INCREDIBLY revealing statement by Eyepatch McCain, claiming that their objections was just ‘stupid platitudes that some consultant told you to say on the campaign trail’.

Because in his mind, conservative principles are ‘stupid platitudes’ fed to him by ‘consultants’.

That said a HELL of a lot more about Crenshaw than it did about the 19 holdouts (the 20th is just voting present and isn’t really part of this).

He’s such a RINO I despise him

For a while, I thought he’d be fine. His move to being this way was – in my view – very quick.

I wonder who’s blackmailing him?

He’s looking for a CNN gig.

Actually, at the moment it appears that they’re voting to adjourn – but the Dems are solid “no”. It’s still pretty certain that nothing is going to be done on the floor – all of the negotiating will be out of sight.

Interesting. So it seems like McCarthy still doesn’t have the votes and wants to be spared further humiliation of being voted down yet again?

Yup, they’re done for the night.

Since they havve not yet been sworn in, are they getting paid for this time?

An interesting question that I’m sure will be solved by them quietly voting for themselves to get paid on page 29348 of the next crap spending bill they spew out.

Which is what Gaetz et al are trying to stop.

The only way to understand what’s happening is that McCarthy is an idiot.

He should have been cutting deals with the no votes. Instead he threatens them. Threats don’t work on people who don’t care about being threatened.

It appears that the only negotiation that DID take place was between their respective financing arms, promising not to step on each others’ toes.

He’s really not that clever nor that much of a leader. He’s just a hustler.

McCarthy does not have, and will not get, the votes to be Speaker. If he can’t deal with his own party, how will he deal with the ruthless Communist opposition?

He needs to give it up. Either convince Jordan or Scalise to take it, or get someone from outside the House (it is not constitutionally required that they be a standing member to be speaker).

I have to admit that picking Trump as speaker would be worth it just to see 50 Democrat/Communists die of strokes, but we have too many squishes on our side to get him elected.

I go back to my earlier proposal – give it to Lee Zeldin.

The R’s should nominate and vote for Byron Donalds. A twofer, he is conservative and African American. And he would be the first African American speaker. Talk about the demonrats clutching pearls. The meltdown would make Trumps election in 2016 tame by comparison.