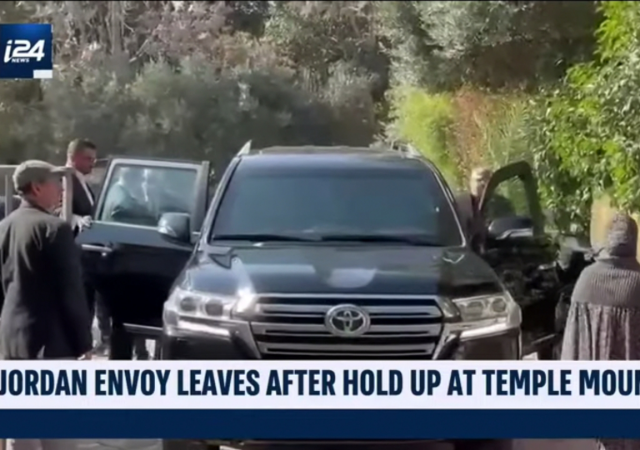 The Arab kingdom of Jordan is trying to incite Arab and Muslim religious sentiments against Israel by staging a “diplomatic incident” over the Temple Mount in Jerusalem.

Jordan, Israel’s Arab neighbor to the east, summoned the Israeli ambassador after Jerusalem police briefly stopped its envoy from visiting the holy site to coordinate his tour.

In “strongly-worded letter of protest” addressed to the Israeli government, Jordan declared that it has custodial rights over the biblical site — a privilege granted by Israel despite liberating Jerusalem in the 1967 war. “The letter included a reminder that the Jordan-run Jerusalem Waqf Department is the exclusive authority supervising holy sites in Jerusalem, including Al-Aqsa Mosque, the statement said,” the Qatari state-owned Al Jazeera TV reported.

According to the so-called “Status-Quo Agreement,” Jews cannot pray at the holy site where the first and second Jewish Temples were situated.

Jordan contrived a non-existing diplomatic incident with Israel. It sent its ambassador to the Temple Mount without coordination, but the ambassador was let in anyway by Israeli police as initially released videos show. pic.twitter.com/7nGn4CSbs8

The Israel Police, which has security control over the Temple Mount, said that its officers had not been notified in advance of the visit and asked Jordan’s Ambassador Ghassan Majali to wait while they checked the situation with their superiors.

Jordan orchestrated the diplomatic incident just weeks after the country’s ruler King Abdullah threatened Israel against crossing red lines with regard to the status of the sacred biblical site.

Palestinians, the Arab states, and the mainstream media were furious when Israel’s newly-appointed National Security Minister, Itamar Ben-Gvir, visited the Temple Mount on January 3. The minister, who heads the conservative Otzma Yehudit party, merely toured the site and did not offer any prayers in keeping with the “status quo.”

But this was enough to anger the Biden White House. “The Biden administration slammed as “unacceptable” National Security Minister Itamar Ben-Gvir’s Temple Mount visit …, which sparked global condemnation and created immediate friction between Israel’s new government and the US,” The Jerusalem Post reported.

The Israeli minister’s visit to the holiest site of Judaism “drew international condemnation,” CNN claimed. Labeling his as a minister in the “most right-wing government in Israel’s history,” the broadcaster told its readers that Ben-Gvir “believes that Jews should have the right to pray there, too.” What a shocking notion!

So, it’s verboten (correct inference) for high ranking Jews to visit the Temple Mount? Great coordination of the FJoe Biden Admin and the “others”

Cut off their water.

What’s changed? Jordan’s been playing in the “orchestrated provocation parade” lately. This isn’t usually them. What’s up with that?

For the longest time Jordan and their govt were the sane, non-rabid Israeli neighbors; at least since they got their butts kicked in one of those “everybody dog-pile to wipe out Israel” wars back in the day. From time to time they’d tepidly agree with some group proclamation. Then, they’d go back to doing none of that, so much they’d get flak from their neighbors, sometimes.

There’s the right question.
And the follow-up: Does the Biden administration have anything to do with it?

Nothing has changed. The Jordanian people have always been angry about the peace treaty their king signed, without their consent. And ever since then the kings and governments have tried to placate their people by making hostile statements whenever they could.

The Temple Mount is a particular sore spot. The peace treaty specifically provided that Jordan retains authority over that site. It was to protest that provision that Arik Sharon first went for a walk on the site, and why he was (if I recall correctly) the only member of Knesset to vote against the treaty.

Any time anything happens there, Jordan files an official protest. Just a few years ago, when in response to terrorist attacks carried out on the Mount, the Israeli government installed metal detectors at the entrance, the whole world, led by Jordan erupted in outrage at this “gross interference with its sovereignty” or some such nonsense.

Ben-Gvir will do whatever he can to change the status quo there, because that status quo is intolerable. Netanyahu made him promise not to change it, so he’ll push at the edges, trying to move things ever so slightly while having plausible deniability.

I’m not in a position to judge whether this is a wise policy, but morally the status quo must be changed. It cannot be that Moslems are allowed to do whatever they like up there, while Jews are barred, or at best allowed to tiptoe through it like some kind of intruders. Ideally the whole site should be shut down. Nobody should be allowed to go there, so nobody can complain that anyone else is misusing it. But so long as Moslems are allowed, Jews must be too.

Jordan can have the remains of the Moslem buildings on the site now. Their religious justification for any relationship with the site is paper-thin and eventually common sense has to prevail. They have plenty of open desert and can erect them in Jordan.

I agree about using “Moslem”. That’s how I’ve heard Moslems themselves pronounce it, with hard “o”.

Their justification probably comes from King Abdullah (supposedly) being a direct descendent of Mohammed.

You did not say the govt of Jordan has historically and routinely been provoking diplomatic incidents in Jerusalem, e. g. “nothing has changed”, only that they’ve had plenty of reason to act up for a long time.

Grant that none of the background you posted has changed. Do you assert that the govt of Jordan has been running something like the recent level of diplomatic incidents in Jerusalem all along?

It looks like they’re acting more lately on all that enumerated inconvenience and animus, which leaves the questions: Why?, Why this way?, and Why now?

Nothing has changed; the government of Jordan has been loudly protesting every time something happens up there. Every time Israel asserts sovereignty, which was the point of Arik Sharon’s two visits, and of Ben-Gvir’s visit.

I don’t think they deliberately provoked a diplomatic incident. I think the ambassador went, seriously thinking he would be admitted immediately. When he was briefly stopped, because the cops weren’t expecting him and needed to call for instructions, they protested.

“I don’t think they deliberately provoked a diplomatic incident.”

Not a great place to put an under-capable Ambassidor or staff. Even absent intent, the question remains:

“What’s changed? Jordan’s been playing in the “orchestrated provocation parade” lately. This isn’t usually them. What’s up with that?”

Jews can’t worship at their historical holy place — which pre-dates the founding of the supremacist and totalitarian ideology of “Submission,” let’s note — but, Muslims can worship at theirs? The vile Dhimmi-crats’ should explain how they believe this is a fair position to take.

Tying in to Prof J’s post about not using their language, the reason I insist on spelling it “Moslem” rather than “Muslim” is partly because that’s how everyone spelled it when it became part of my vocabulary and I see no reason to change, but mostly because they insist so strongly that I do change. If it bothers them so much, I will keep on using it. I won’t allow them to dictate how I use my language.

Frankly, it would serve them right if Israel, following honored Moslem tradition, tore down the mosque and rebuilt the Jewish temple.

It would serve them right, but the inevitable result would be bloodbaths all over the world. It’s just not worth it.

What makes you think there will be any fewer “bloodbaths” either way, over time? After all, that’s what they do.

Because it hasn’t happened yet. Demolish the mosque and it will happen.

The Israelis seem to be one of the few non-Muslim societies left in the West willing to actually defend their own existence, but if the Israelis are unwilling to defend one of their most sacred sites, what will they defend?

Sooner or later the bubble is going to burst. Islam and the West can’t survive side-by-side unless the West possesses overwhelming power, and that’s becoming too tenuous a thread to trust.

The death toll from their last “intifada” was what, in the hundreds? Have to stop submitting to these people whose religion is all about inducing submission, according to themselves.

Demolish the mosque and there will be bloodbaths, immediately, and it won’t be in the hundreds, it will be in the thousands. All over the world.