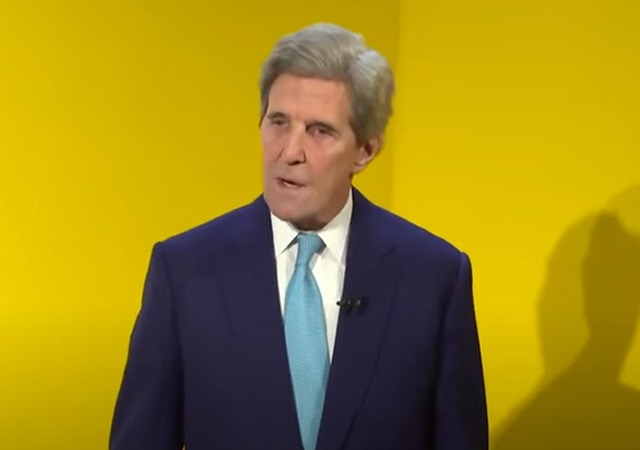 While speaking at the World Economic Forum this week, former secretary of state John Kerry seemed to inadvertently admit that the issue of climate change is all about money.

It makes perfect sense. Climate change and all of the activism around it have become big business. All those private jets in the parking lot aren’t going to pay for themselves.

The world will eventually move to a low-carbon economy, but it may be too late to avoid the worst effects of climate change, according to John Kerry.

Speaking at the World Economic Forum in Davos, Switzerland, on Tuesday morning, the U.S. special presidential envoy for climate issued a stark warning about the years ahead.

“I’m convinced we will get to a low-carbon, no-carbon economy — we’re going to get there because we have to,” he said.

“I am not convinced we’re going to get there in time to do what the scientists said, which is avoid the worst consequences of the crisis,” he added.

“And those worst consequences are going to affect millions of people all around the world, [in] Africa and other places. Of the 20 most affected countries in the world from [the] climate crisis, 17 are in Africa.”

In his remarks, Kerry also spoke about the task of keeping the goal of limiting global warming to 1.5 degrees Celsius alive.

Can we start with John Kerry’s money?

During the same speech, Kerry talked about how great he and his fellow WEF attendees are for stepping up to save the planet, using some bizarre wording in the process.

Kerry characterized efforts to combat climate change and save the planet as “almost extraterrestrial” given their scope in his remarks earlier Tuesday. He also downplayed criticism that has been levied against such climate activism, noting that “most people” believe he and the other WEF participants are just “crazy” tree huggers.

“When you start to think about it, it’s pretty extraordinary that we — select group of human beings because of whatever touched us at some point in our lives — are able to sit in a room and come together and actually talk about saving the planet,” Kerry remarked. “I mean, it’s so almost extraterrestrial to think about ‘saving the planet.’”

A “select group of human beings.”

Doesn’t that say it all?

Well, of course. That’s what it’s always been about.

If no money was involved, John Kerry would not be involved.

This sleazy gigalo has been a lying stain in American life every since his first set of lies in the 60s.

Kerry peddled the P5+1 Iran nuclear deal. Chuck Grassley and the GOP happily bought into the sham. He then undermined Trump by going to Paris to inform the Iranians that the “deal” was still on – despite Trump throttling it in the crib.

You mean actually, vs. fictitiously violated the Mann act? Do tell.

Yes, actually. Do your own homework. I’m not your file clerk.

Sorry, I thought the “Do tell.” was sufficient indication of sarcasm directed at the folks who need to be told, and obvious after supporting your point by naming the legislation they actually tried to use on Trump (and decline to on The Ketchup Master.)

Apparently not that obvious. Even so, I’m pretty sure I didn’t deserve that

One of MANY Massachusetts’ national embarrassments.

I’d be sorry too, if I had decided to ghost Morgan Fairchild and marry Theresa Heinz to ensure a solid financial future for the progeny I forgot to have.

But even more importantly than money is how fortunate the world is to have John Kerry and his select group of humans to plot our futures for us.

John, why the long face?

The long mandibula is a sign of inbreeding, really!

So give them YOUR fucking money you traitorous jackass.

Here’s an idea: Why doesn’t the WEF lead the way to a carbon-neutral future by conducting the next WEF global meeting via Skype. Think of all of the jet fuel that wouldn’t be burned! The participants could then donate all of the unused travel-money to fund the $5 million reparations per each Black Californian. That’s a huge two-fer for the WEF! John Kerry’s gonna LOVE this!

I have said this many times: They want you and I to change the way WE live. They have no intention of changing the way THEY live.

Yep. These jabronies refuse to lead by example instead they prefer to skirt Western democracy by appealing to the ego and authoritarian tendencies of the bureaucracy to dictate and enforce their pronouncements. Rules are for the little people.

No amount of liberal graft is going to change a system that’s been around longer than life.

Well, John,
Once you have emptied all your (and your wifey’s) accounts to give to this cause that you are So-o-o-o-o attached to, let me know.
Until then, I have some petrol to burn.
I don’t know why the media covers this stupid event when it’s so clear none of them believe a word they say. They could do it all on a video-chat and not burn any jet fuel if they were actually concerned.

But that would put all the hookers out of work.

The malignant and pathological narcissism of this self-reverential hustler is contemptible beyond belief, even by Dumb-o-crat standards.

So, The West has to destroy itself economically to accomplish nothing because the worlds biggest polluters which are China and India are refusing to play the game and we have to pay…who? The UN? How about no.

Here’s an idea: let’s make John Kerry an actual extra-terrestrial and blast him into outer space!

You might not think this is possible, but Lurch is actually dumber than he looks

FIrst, the Democrats solution for everything is more money. Second, I have a suggestion for all of those at Davos, find the cleanest way to get there next year and show how much you’re willing too commit to this project.

NOBODY voted for this sanctimonious grifter.

Hate to admit it, but Massachusetts sent him to the US Senate.

Giving money to terrorists will not fix anything. Remember North Korea? The climate control is a lie. Being a liar, Kerry knows this. Don’t send him a dime. Maybe we can sue him for lying to us the last 50 years!