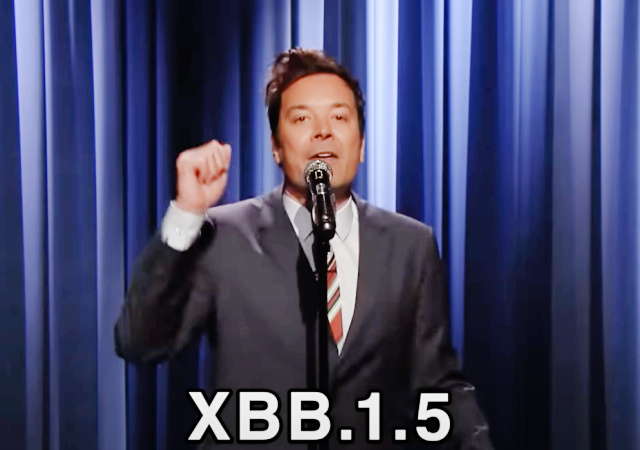 Jimmy Fallon wrote a terrible song about the new COVID variant. Usually, late-night show songs are cringe and stupid, but this is…cringe.

It sounds like he wanted to use the music from the B-52s’ hit Love Shack and wanted to sound like frontman Fred Schneider.

I transcribed it for you, so your ears don’t bleed.

There was Alpha, then Delta, then Omicron next, but this latest variant might be the best.

It’s XBB.1.5. Another brand of COVID-19 has arrived. It’s a new strain but it isn’t the same. Sounds more like Elon Musk’s kid’s name.

Put on your mask when you’re inside a facility.

It could be a robot from a Star Wars trilogy.

It’s XBB.1.5. Not OMG or MP3 or TCBY or an eye chart made by a really high guy. Sounds like the password of your parents’ Wi-Fi.

You’ll notice that Fallon and his band aren’t wearing masks but tell you to wear one in a facility.

Also, the variant is an Omicron subvariant.

The line about Musk’s kid is funny or a Star Wars robot. But not in this…whatever you want to call it.

BONUS FLASHBACK! Stephen Colbert had a song about the vaccine.

Establishment lib comedians like Colbert have become such unfunny DNC propagandists, you wonder if somewhere on the inside they miss actually trying to make people laugh for a living instead
pic.twitter.com/i5tiGIKDmi

They admit he’s over paid

If they had any shame or self-respect, they’d be embarrassed. But they love to be tools of the state. No way the show came up with this dumbass thing on their own instinct.

Fame and a paycheck. Obviously worth it to them.

I remember when comedy was funny

Songwriting by committee is a very frustrating experience. And doing so on a deadline – most songwriters are wordsmithing right up to the recording session. Still, that’s an awful song.

I read this today. I think this is known as the nail in the coffin for Trump’s base of support .

An actual quote from Donald Trump: “The Fake News Media was, believe it or not, very gracious in their reporting that I greatly helped Kevin McCarthy attain the position of Speaker of the House,”

“Thank you, I did our Country a big favor!”

He’s singing the right tune. It matches him perfectly.

not the only tiny thing about him.

Jimmy usually likes doing these little songs. But just phoned this one in. Yikes.

He should be made to wear a bag over his head any time he’s in public until the shame of this passes.

Sometime in the year 3054 he *might* be safe to show his face again.