“I would refer you–it’s very clear. I just laid out–there’s no–there should be no confusion here. There’s a legal process happening” 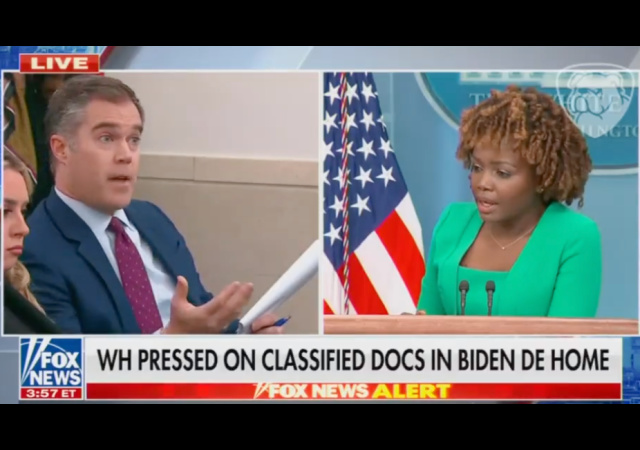 Press Secretary Karine Jean-Pierre is not good at her job. Since attorneys found Biden’s classified documents, President Joe Biden’s administration also hasn’t prepared her for the onslaught brought on by the White House press corps.

“This Sunday, the President will speak about the fight to secure women’s fundamental right to reproductive health care in the face of these attacks. She will talk about what’s at stake for millions of women across the country and, most importantly, the need for Congress to codify the protections of Roe into law.”

KJP could not answer any questions about the classified documents.

“I refer you to the White House counsel’s office.”

“That’s for the DOJ to answer.”

.@GrayTelevision's Jon Decker: On '60 Minutes,' Biden "chided…Trump for having in his possession classified documents. He called it irresponsible…[D]o you think it was proper for [him] to comment on an ongoing DOJ investigation?"

Decker: “–on the person that you work for and his comments–”

Decker: I also want to ask you–

KJP to another reporter: Go ahead. No, go ahead. [to Decker] No, I already answered your question.

Decker: No, you didn’t. You gave me a non-answer.

AP's @JoshBoak: "Help us understand given the frequency with which President Biden works in Delaware, what is the case against having visitor logs for his house?"

KJP: "So, I'm — I am going to refer you to my — the White House counsel. They actually addressed this" pic.twitter.com/7KbuOKcBsK

Reporter: "We don't know what's in these documents…Is the U.S. working to reassure allies & partners…you can still participate in intelligence gathering & still be trusted w/secrets?…Are those conversations the President is having?"

KJP: "I'm not in a position to talk" pic.twitter.com/eg7zJVYhye

ABC's @KarenTravers: "[T]here was a formal request from the @WHCA to have [WH counsel] Richard Sauber come to the briefing & take questions…Would you commit to having [him] come here & take questions?"

KJP: "That is something…I would refer you to the WH counsel's office" pic.twitter.com/vogBlaMqFd

Then KJP had it out with CBS’s Weijia Jiang.

Jiang couldn’t understand why KJP wouldn’t answer a simple question about the procedure.

Then Jiang asked the question everyone wanted to ask: “So, to be clear, from this point on, are you not going to be taking questions about the classified documents?”

CBS's @Weijia Jiang: "I'm just wondering how this episode has prompted a review of" how "staffers handle classified information & how they are turned over to National Archives during a transition?"

KJP: "And, to be clear, I'm going to refer you to…the WH counsel's office" pic.twitter.com/MGM9Ss5M0V

Jiang: Why not? I mean, I’m having a hard time understanding why-

KJP: -and…the WH counsel’s office will be able to address that pic.twitter.com/y45btDfYyx

KJP: “Again, I will refer you to the White House counsel’s office…They are the people who would be able to answer” pic.twitter.com/nKfY5Meelw

CBS’s @Weijia Jiang: “So, to be clear, from this point on, are you not going to be taking questions about the classified documents?”

The word “clear” is about to trigger me.

KJP overused it in her discussion with Fox News’s Jacqui Heinrich.

JACQUI TIME: "Since so many of our questions have been referred to the DOJ & to the WH counsel's office…we're in..an information blackout where…If you are not able to talk about this from the podium, would you invite a DOJ official to take our questions here?

.@JacquiHeinrich: “Could you even think of anyone else in the White House counsel–or the President’s personal lawyers? Anyone?”

KJP: “I was just very clear. If you have any questions, I would refer to the WH counsel’s office. They did a call…yesterday.” pic.twitter.com/AVSuq9ECGh

.@JacquiHeinrich: “But on questions that you should be able to answer…can you tell us if there’s any sort of assessment that has been planned or launched to determine if national security has been jeopardized at all?”

KJP: “Again, that’s for the Department of Justice.” pic.twitter.com/vvnhDkgJ5z

.@JacquiHeinrich: “Why is it a DOJ question?”

KJP: “And, let’s be clear. It’s not your decision to make on what I can’t and can answer from here. What I am telling you is that we are respecting the process. We are being prudent from here.” pic.twitter.com/JZL0tPZWII

.@JacquiHeinrich: “Are they working w/NSC or w/any other intelligence agency? I just — I don’t understand why we’re being referred.”

KJP: “I would refer you–it’s very clear. I just laid out–there’s no–there should be no confusion here. There’s a legal process happening” pic.twitter.com/w7rXEt9xuc

NBC's @PeterAlexander: "We've all reached out to the Department of Justice…[They have] not told the WH that it cannot talk about the fact underlying the special counsel investigation…So…why can't you speak about the underlying facts?"

.@PeterAlexander to KJP: “Bob Bauer…said…why they shouldn’t reveal further details…was regular ongoing public disclosures also pose the risk…answers may be incomplete…Will you concede that it’s the WH that has been in complete in its provision of information?” pic.twitter.com/2ydel3ZXri

NBC’s @PeterAlexander: “Then is the White House having any conversations internally about finding someone…who can speak on behalf of the White House, representing the special counsel office…from this podium?”

KJP: “I would refer you to the White House counsel’s office.” pic.twitter.com/otqplCUugW

NBC’s @PeterAlexander: But you’re the communications-

Alexander: -you, as a communications matter, having-

Peter: -playing any part of those conversations pic.twitter.com/tz4B9nWHhu

KJP: “Peter, you’ve spoken to my colleague who, again, did a 45 min call w/all of you answering questions about–“

NBC’s @PeterAlexander: “But..it’s on background, though, Karine, not on the record until the call ends. That means the American people can’t see it in public.” pic.twitter.com/p5SikKBUH4

KJP: “But the call was…in papers. It was on networks.”

NBC’s @PeterAlexander: “Correct, but b/c they can’t witness it…Americans don’t get the same transparency…I’m asking if that conversation exists?”

KJP: “The fact…he spoke to all of you…that is transparency” pic.twitter.com/Dy3Mjr2W56

President Harris? Maybe sooner than most think?
Raggity Karine is way over her head, but a good check off of the Diversity list

Dumb as she appears to be, on this specific issue KJP appears to have been told not to answer any questions and refer them elsewhere.

I agree. It’s easy to imagine the WH Chief of Staff or WH Counsel directing her on what to say, what not to say, and they carefully rehearse Joe’s legal team’ agreed upon narrative with her.

KJP is a condescending, authoritative, power hungry communist who thinks she is powerful. Joke is on her. She is a tool of the evil people handling Biden and doesn’t realize she’s being used.

Yes, it does appear that KJP let the cat out of the bag by inadvertently calling her President.

This Diversity crap isn’t all it’s cracked up to be, is it!

The proof is just adding up that you can’t concentrate on checking all the DIE boxes and get competence, too.

“But first, KJP called Vice-President Kamala Harris….President”
Well, she’s Biden’s spokesperson, isn’t she? So does he.

Was that before or after Harris refused to bow the knee with Joe at the photo op with the basketball players? “I’m not doing that,” she said and backed up off the stage leaving the idiot kneeling by himself.

White House janitorial services would like their mop back.

She can’t even lie well. If Biden wasn’t aware of the documents why was anybody looking for them, and how did those looking just happen to look in the right place?

Hammered? She ain’t being hammered by her friends in the press corpse 😂

Man, I wish these clowns showed a fraction of the venom the press corpse showed towards Trump and Huckerbee because this bint, this diversity hire, absolutely deserves to be destroyed on the podium for her actual lies as opposed to the imaginary ones the Democrats wanted to hear during Trumps term.

For once someone uses the correct spelling of press corpse.
It is indeed a dead body.

Her job is to be a shill for the Administration, lying and obfuscating. That is what she is trying to do. She just isn’t very good at it

I could call Karine Jean-Pierre dumber than a box of rocks, but then why insult the perfectly innocent rocks?

The Spokesditz is doing what she was told to do. By constantly referring everyone to the different departments she doesn’t have to answer. When they call the Counsel, DOJ, CIA, NSC, etc. Theu will simply refer the question back to the WH. This is simply a variation of the bamsters statements that “hey I just heard about it in the news the same time you did” obfuscation/non-answer.

Well, clearly she has issues. But why in the world is the White House still employing this insurrectionist? She already denies publicly that the President of the United States of America who received the most votes ever in the most securest election ever held is the President and openly treats him as if he were replaced by a person not elected President.
Where is the Garlandstapo when you need it?

In short, the lesson learned here is that you should never tell the press secretary one word that you don’t want her to repeat in front of the press, much like you have to watch your language in front of a parrot.

Somebody, we don’t know who, told her about the plan to have Joe step down and she couldn’t keep her mouth shut.

Biden has been calling Harris the President for years. This only confirms it.