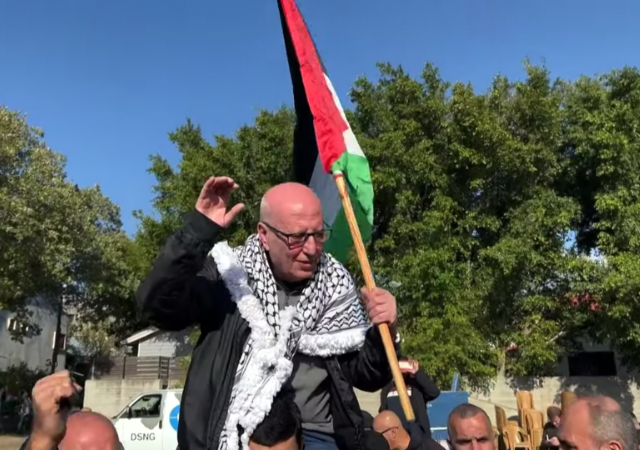 Prime Minister Benjamin Netanyahu’s government has opened a probe after a convicted terrorist received a “hero’s welcome” in his hometown in northern Israel.

On Sunday, Israel’s newly-appointed Minister of National Security, Itamar Ben-Gvir, ordered the police to investigate the public reception offered by Israeli Arabs to Karim Younis, an Arab terrorist who murdered Israeli soldiers in 1980 and was released after serving a 40-year prison sentence. Younis, an unrepentant terrorist, declared that he was ‘proud’ of his past murderous actions, media reports said.

The “64-year-old Younis was met by hundreds of supporters singing the Palestinian national anthem in his home village of ‘Ara in northern Israel,” The Times of Israel reported last week.

National Security Minister Itamar Ben-Gvir on Sunday instructed Israel Police Commissioner Kobi Shabtai to open a probe into what he views as internal failures that allowed public celebrations to be held last week for an Arab terrorist released from prison.

Karim Younis, an Arab Israeli jailed for murdering Israel Defense Forces Cpl. Avraham Bromberg on the Golan Heights in 1980, was freed from jail last Thursday and received a hero’s welcome upon his return to the northern Israeli town of ‘Ara.

“[These] are celebrations of incitement and explicit support for terrorism, and it’s unacceptable for such events to happen in our home. The State of Israel has no place for [them],” Ben-Gvir said in a statement Sunday.

“I will do everything in my power to prevent these occurrences until a law is passed on implementing the death penalty for terrorists,” he added.

Cousins Maher and Karim Younis, from the Arab town of ‘Ara in northern Israel, murdered Cpl. Avraham Bromberg in 1980. The assailants offered the soldier a ride as he was heading home from his army base in the Golan Heights, then overpowered him, shot him in the head, and stole his weapon. They left him on the side of a road where he was found and brought to a hospital, but he died days later. The killers were arrested two years later and sentenced in 1983.

His cousin and terror accomplice is also expected to be out of prison soon. “Maher is due to be released in two weeks. Both were given life sentences but theses were commuted in 2012,” the news website added.

Following the hideous display of support for terrorism among Arab Israelis, Prime Minister Netanyahu’s government has presented legislation to revoke the citizenship of terror convicts like Younis, who receive generous financial allowances from the Palestinian Authority (PA) for their murderous exploits.

“If the bill is approved, it will notably be possible to revoke the Israeli citizenship of terrorist Karim Younis, who murdered Israeli soldier Avraham Bromberg in 1980 and was released from prison last Thursday, paving the way for his deportation. The same applies to his cousin and accomplice Maher Younes, who will be released in a week and a half,” the Israeli TV channel i24news reported Monday.

With the West Bank-based Palestinian Authority paying hefty allowances to terror convicts like Younis, the new Israeli government has decided to transfer $39.5 million worth of Palestinian revenue to the victims of Palestinian terrorism.

The PLO-controlled Palestinian Authority runs a multi-million dollar ‘pay-for-slay’ scheme, which offers salaries and allowances to convicted terrorists. According to the Israel-based watchdog Palestinian Media Watch, the “Palestinian Authority Martyrs Fund” gave out an estimated $150 million to terrorists and their families in 2020. The financial and humanitarian aid provided by the U.S. and other Western governments is diverted to finance this ‘pay-for-slay’ jihad and terror financing scheme.

Israel on Sunday transferred 138.8 million shekels ($39.5 million) of revenues collected for the Palestinian Authority to the victims of terrorism and their families.

At a press conference on Sunday, Israeli Finance Minister Bezalel Smotrich said, “We promised to fix this, and today we are correcting an injustice. This is an important day for morality, for justice and for the fight against terrorism. There is no greater justice than offsetting the funds of the Authority, that acts to support terrorism, and transferring them to the families of the victims of terrorism.”

The P.A. pays monthly stipends to Palestinians, and/or their families, for carrying out terrorist attacks against Israel. In 2021, the P.A. paid out an estimated 512 million shekels ($157 million) as part of this “pay for slay” policy.

News reports suggest that the tough stance against the terror-supporting PA by Prime Minister Netanyahu’s newly-formed government is expected to upset the Biden White House. “Netanyahu’s government adopted punitive measures against the Palestinians that run in direct opposition to several recent Biden moves to boost US-Palestinian relations,” The Times of Israel conveyed.

Does the Israeli government tax the pay for slay money that Israeli citizens receive from the PA / PLO? If not, why not? The tax rate on such income should be 100%.

As far as I know, Israeli citizens do not receive these payments. They go only to PA “citizens”, so Israel can’t tax them.

Thanks for the news with context!

I’m in two minds about this. On the one hand, I wish Israel had an equivalent to our first amendment, protecting the freedom of speech. And if it had one, then this sort of obscene display would certainly be protected and it would be illegal for the government to do anything about it. On the other hand, the fact is that Israel has no such amendment, and no real freedom of speech. And we on the right already suffer from this to the fullest extent of the law. So it seems only right that the supporters of terrorism should also suffer from it. (As should the political left, but that’s a different discussion; these people are neither right nor left, but simply enemies of Israel, and they should not enjoy more freedom than we do.)

Heroism is an unqualified, relativistic concept. Here’s to progress: Throw another baby on the barbie.

It makes me sick to read about this stuff. And, the vile Dhimmi-crats earnestly believe that these belligerent, hate-filled Arab Muslim terrorists and their gleeful supporters are the alleged “victims” in this scenario? Contemptible and galling.