Harvard Capitulates: Will Give Ken Roth, Who Devoted His Life To Delegitimizing Israel, Prestigious Human Rights Fellowship After All

Harvard Capitulates: Will Give Ken Roth, Who Devoted His Life To Delegitimizing Israel, Prestigious Human Rights Fellowship After All

Pro-Roth echo chamber succeeds in pressuring Harvard into reversing decision to deny Roth a human rights fellowship, even though he has done more damage to legitimate “human rights” advocacy than almost any other living person. 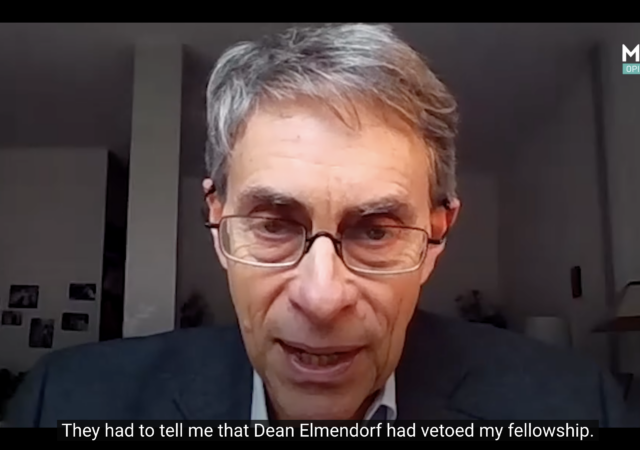 Robert Bernstein is rolling over in his grave.

Kenneth Roth, who for nearly 30 years led the Human Rights Watch (HRW) organization Bernstein founded into moral bankruptcy (archived version of Bernstein op-ed here), has gotten his Harvard fellowship. HRW used to be a prominent human rights watchdog. Under Roth’s leadership, it degenerated into an anti-Israel and anti-Semitic hate group posing as a human rights group.

After a groundswell of criticism, the Harvard Kennedy School on Thursday reversed its decision not to offer a fellowship to a leading human rights activist who believes he was rejected because of his past criticism of Israel.

Controversy had swirled on campus since news of Roth’s initial rejection for the fellowship at the school surfaced earlier this month. Hundreds of students and alumni signed open letters calling for the dean to resign and for Roth’s fellowship to be reconsidered…

Roth, the former executive director of Human Rights Watch, had been nominated for the fellowship by Mathias Risse, who directs the Carr Center. Risse said Thursday that he believes faculty input caused Elmendorf to reverse course and admit he made an error. Roth, who had been named a fellow at the University of Pennsylvania after the Harvard veto, has accepted the Carr position and they are discussing details, he said.

“There was an enormous amount of [Kennedy School] faculty mobilization in support of having Ken Roth here as a fellow,” Risse said. “In fact, the faculty spoke pretty much unanimously in this matter, and this would include many who disagree with him on certain things. I am very happy about this turn of events.”

JNS reports: “He [Elmendorf] attributed his initial rejection of Roth’s fellowship to an ‘evaluation of his potential contributions to the school.’”

Over the last twenty-plus years, the atmosphere at Harvard has become increasingly anti-Israel and anti-Semitic. Back in 2002, Harvard rejected a call by a small group of faculty to divest from Israel. Seven years ago, in 2016, Harvard’s former president (and former U.S. treasury secretary) Lawrence Summers wrote an op-ed (archived here) published in the Washington Post condemning universities’ hypocrisy in tolerating anti-Semitism, even as they trumpeted their hypersensitivity to every other group. Last May, Harvard’s student newspaper, The Crimson, endorsed the anti-Israel Boycott, Divestment, and Sanctions movement, although at least it received some pushback from prominent faculty. More recently, as LIF previously reported, Harvard ranked first in number of anti-Semitic/anti-Israel incidents on campus in a study recently published by AMCHA Initiative.

In other words, over time, anti-Israel and anti-Semitic voices have grown louder and louder, and Harvard’s pushback has progressively shrunk.

Which brings us to today, when Dean Elmendorf’s short-lived burst of courage collapsed under pressure. The result is unsurprising, but tragic nonetheless.

For Harvard, trying to stand up straight and act decent is too difficult. Back down on their all fours comes natural to them.

Actually, they are lying on their backs like threatened puppies.

Another liberal Jew selling out the tribe.

I guess you can always count on the antisemites joining forces to back one of their own.

And Harvard loses even more legitimacy…

Dear Jews, if you are young or you have young children, it’s time to leave. Check with http://www.nbn.org.il. They will help. It’s not easy. But it’s worth it. Don’t miss this opportunity.

You can slam Harvard all day and night. They’re awful. But also look at the students. They helped drive this decision. They are the next generation of leaders.

Kenneth Roth, in an attempt to deligitimize Israel, has deligitimized himself, but Harvard is honoring him anyway.

It doesn’t say what he’s being honored for. Presumably it’s not for being a nice guy. There a lots of nice guys.

Not tragic if you don’t give a fig about that Bastion of Work Pompousness.

Would IU be any better?

The percentage of Harvard undergraduates who are Jewish has declined by 60% over the past two decades. With any other group (except for white males) that would be seen as a crisis.