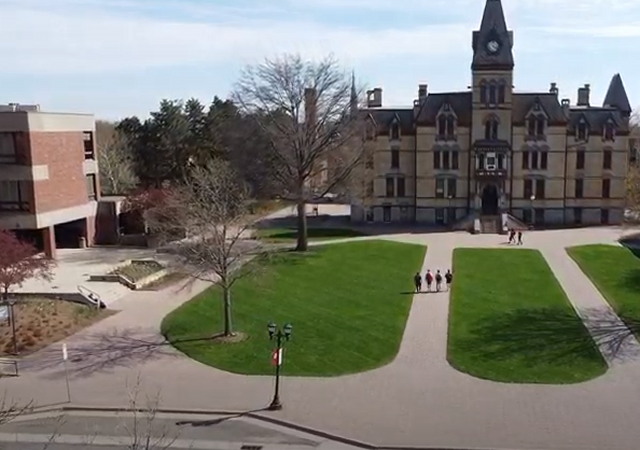 As we pointed out in a recent Quick Take, an art professor at Hamline University didn’t get his contract renewed after he showed images of the Prophet Muhammad to his students.

Now the story has blown up and gone national.

The Academic Freedom Alliance released a statement regarding the decision of Hamline University to fire an instructor for showing a class in global art history a picture of a medieval Persian painting depicting the Prophet Muhammad. This is an appalling violation of academic freedom.

The painting in question is widely regarded as an important work of art in the Persian and Islamic traditions, and it is regularly exhibited and taught in classrooms across the globe. A video of the class session reportedly indicates that the professor took care to give a “content warning” and provide necessary context before the image was shown to the class. The class itself was apparently virtual, and the instructor gave students an opportunity to turn off their own video feed to avoid viewing the image.

Some students in the class complained that they felt disrespected by the showing of an image of Muhammad which some  devout Muslims regard as unacceptable. The associate vice president for inclusive excellence denounced the instructor’s actions as “inconsiderate, disrespectful and Islamophobic” and “unacceptable” in a Hamline classroom. The president then announced to the campus community that academic freedom “should not and cannot be used to excuse away behavior that harms others.” The putatively harmful behavior in this context was showing to students in a college class a famous work of Islamic art. Nonetheless, the president concluded that “respect, decency, and appreciation of religious and other differences should supersede” academic freedom.

The Foundation for Individual Rights and Expression (FIRE) has also taken notice:

Minnesota’s Hamline University has betrayed its commitment to “embrace” free expression, including potentially “unpopular and unsettling” ideas. In clear violation of faculty academic freedom, Hamline nonrenewed an art history instructor for the in-class display of artwork depicting the Islamic prophet Muhammad. In dismissing the instructor, the university reportedly said “respect for the observant Muslim students in that classroom should have superseded academic freedom.”

As PEN America said last week, this is “one of the most egregious violations of academic freedom in recent memory.”

Hamline reportedly justified dismissing the instructor based on concerns about “Islamophobia,” as many Muslims believe Muhammad should not be depicted in any way. However, blanket bans on displaying pedagogically relevant material are not acceptable at a university that commits to academic freedom.

FIRE even sent a letter to the school:

Hamline’s nonrenewal of the instructor for showing an image of Muhammad violates the instructor’s pedagogical autonomy—protected by basic tenets of academic freedom—to determine whether and how to introduce or approach material that may be challenging, upsetting, or even deeply offensive to some. An instructor’s right to navigate difficult material—like whether to display a historical painting of Muhammad when many Muslims believe Muhammad “should not be pictured in any way”—is well within Hamline’s commitment to protect academic speech that may “potentially be unpopular and unsettling.”

Hamline’s policy also reflects our nation’s broader commitment to academic freedom. In warning against “laws that cast a pall of orthodoxy over the classroom,” the Supreme Court called academic freedom “a special concern to the First Amendment” and a principle “of transcendent value to all of us and not merely to the teachers concerned.”

S.W.I.N.E. – Students Wildly Indignant about Nearly Everything was Al Capp’s characterization of SDS. It still applies to too many college students.

“associate vice president for inclusive excellence”? Shouldn’t a University or College always strive for excellence for everyone? Where do I sign up for a make work 6 figure job that does nothing.

How did anyone with such a title avoid being summarily shot?

Literally any university administration job. They have about 4-5 hours of actual work a week and have to fill their time with nonsense.

Anyone with any sense of pride would be embarrassed to take a (alleged) “job” with such a title.

Showing images of Mohammad isn’t an unpopular or discomforting idea. It’s just offensive to Muslims anxious to prove that they can never be Americans.

Our rules are in the Constitution. If you agree, you’re an American regardless what else you are. If you don’t agree, you’re not.

Through this, we’ve learned that a party political commissar is currently called the “associate vice president for inclusive excellence.”

Don’t get complacent. Their names are Legion. And if you catch on to one, they’ll just change it to something else (see today’s article about CRT in Florida).

At some point some “muslims” are going to just have to be told “SHUT UP – THIS IS AMERICA”! And also “IF YOU DON’T LIKE IT _ GO HOME”! But probably this was just a few agitators – probably PAID ones – who make a MOUNTAIN out of a PIMPLE!! I’m in the group that insists on telling them to just SHUT UP!!

If this was a Muslim university, that fully adhered to that religion’s tenets, and the professor had been hired under that guidance and those restrictions, I would support the school.

Don’t forget that the art these Muslims are objecting to was made by other Muslims.

I’m sure that images of a crucifix dunked in urine or people walking on an American flag would have been just fine for him to show his class.

I love it when our universities enforce Sharia.