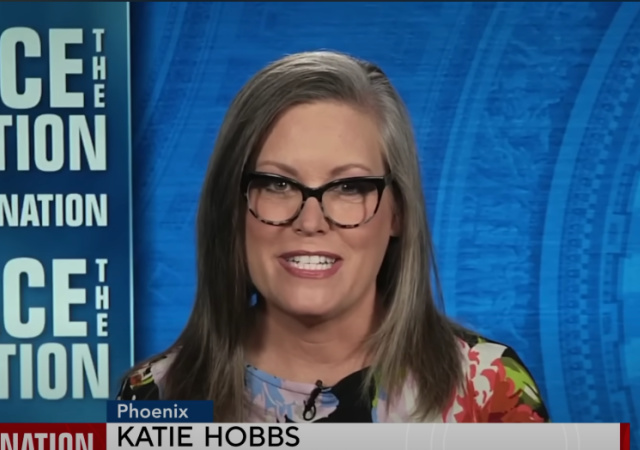 Arizona Gov. @katiehobbs is out of step with her constituents, write @JasonBedrick and @DeAngelisCorey.

The law was the country’s most expansive school-choice program by removing eligibility limits—making ESAs available to all K-12 students. However, the new budget would remove the expansion and only allow 1 in 4 students eligible:

“In her first State of the State Address, she assailed the Legislature for expanding the program and warned it “will likely bankrupt the state.” She claimed the new law is “poised to cost Arizona taxpayers an estimated $1.5 billion over the next 10 years if left unaddressed.”

But there’s an obvious problem with her math. Arizona spends more than $12,000 a pupil on its public schools, while the typical universal ESA award amount is only $7,000. Ms. Hobbs counts the cost of the program but ignores the fiscal benefit. An analysis from the nonpartisan Common Sense Institute finds that the ESA program will save taxpayer money.”

A Morning Consult poll updated this month found that 67% of adults and 77% of parents of school-aged children support ESAs.

Why would @GovernorHobbs want to downsize the program?

Arizona’s ESA program saves the state millions and is supported by 77% of Arizona parents with school-aged children.

Students are taking advantage of the program now that more of them are eligible:

The question now is whether Hobbs has the authority to eliminate the expansion. As of right now, the Republican-controlled legislature can keep the ESAs safe.

Katie Hobbs should not so much as touch the historic school choice reforms enacted under Gov. Ducey but it comes as no surprise the teachers union candidate is doing their bidding as governor. Hold strong, Arizona legislature. Fight for #SchoolChoice. Fight for students! https://t.co/qz7DEurLWK

This is what happens when you let thieves steal their way into power.

Hobbs is on her way to becoming the worst governor in Arizona history.

I know. We’ll vote her out in the next elect…actually forget I wrote that.

So she’s not just an ‘abortion mouse’…

Democrats can only do political math. It is part of their lack of charm and goodness.

Arizonans voted for it. Gotta live with the consequences of your own actions.

Sorry, moose out front should have told you.

I don’t know what that means, but I heard it in Boris Badenov’s voice.

Well, Rocky is not flying to the rescue this time.

And we are getting the consequences in droves.

Somewhere between half and far fewer than half of Arizonans “voted for” Hobbs for governor. Now she’s trying to do as much damage as possible in the limited time she may have.

WE DROVE ALL THIS WAY FOR A LITTLE ROY WALLEY FUN!

Hobbs has no constituents. The people of AZ voted for Lake. The two week ballot harvest “elected” Hobbs, which is why she spent as much time campaigning to voters as did Biden.

All the people who voted for Hobbs, Mayes, and Fontes all attended their little crappy inauguration event. Now she is already doing so much damage and the Leftists in the legislature are looking to attack right-to-work policies.

Fortunately, Hobbs is governor, not queen. Our Republican legislature is going to read her bill and laugh Katie right over our southern border.

I wouldn’t be so sure.

The greatest increase in home schooling is among African-Americans.

This is what Arizona Democrat voters wanted, this is what all Arizona residents get.
Democracy at its very worst.

That’s why the Teachers Union fights for Democrats

I don’t care. Arizona decided they were OK with letting her blatantly steal the election, they can enjoy the consequences, I ain’t lifting a single finger to help them.

It’s almost like letting somebody steal their way to an election, who can govern WITHOUT CARING what voters actually want, is a horrible idea.

The question is, what can people do in the case of a judicial coup (which is what it was)?

Would it work out better for them than J6 or now J8 in Brazil, where apparently they’re identifying people and rounding them in a process just like J6 two years ago here? We have a tyranny of the judiciary.

“In her first State of the State Address, she assailed the Legislature for expanding the program and warned it “will likely bankrupt the state.” She claimed the new law is “poised to cost Arizona taxpayers an estimated $1.5 billion over the next 10 years if left unaddressed.”

So, The Public Prosecutor of Arizona doesn’t much like double-paying for students’ education — once into the “school system” once to get some 3rd party actual education.

Less-wealthy people haven’t liked that for a long time. Once they pay for the mandated public non-education (retirement, health care, but, I digress…), not enough left to buy a useful one.

What’s the statistic on people who *could* and **would* pay out of pocket for their kid’s education if they could only get relieved of also paying that public school system second dip?

To Hobbs, they don’t matter nearly as much as a member of the teachers’ union.

I did some arithmetic…

Over 10 years, that’s $5,4 billion not spent w/in the ed system, which seems like $3.9 billion more than what she’s worried about. Put another way, it only adds to the budget if it’s not treated like the substitution it is: cheaper this, for worst that.

As policy, maybe just take the $7,000 per student outlay out of the state ed budget; let them keep their $5k in “carrying charges.” I was just being snarky, but I like the incentive forces that sets up. Interesting…

The real issue is displayed in the framing by Hobbs. Most State Constitutions have language guaranteeing a ‘public funded education’. The teachers unions, big ed and their allies refuse to admit that public funding doesn’t equate to public (govt) schools.

The tax dollars are for the purpose of providing an education to students not for creating and maintaining govt jobs and payola. Our opposition disagrees and views any plan to reduce or shift funding away from public (govt) schools as theft. The AZ school choice funding has these folks in a tizzy b/c they fear Parents will use it, the Student performance will increase and other States will adopt it. AZ is the battle front on funded school choice.

Another variation on the same is that The Apparatus only wants to put more within the apparatus, rather than provide some support n services for people doing whatever they want, outside The Apparatus.

“67% of Arizonans and 77% of parents with school-aged children support ESAs.”

I guess about 17% of Arizonans are too stupid or lazy to vote for the person who agrees with them about ESAs.

Well, make that 10% and attribute the other 7% to election fraud.

It’s true. I’m an Arizona parent and my children have ESAs. Some other parents in our Facebook group flat out said that despite their children thriving on ESA, they were voting for Hobbs because “muh reproductive rights.” It’s maddening for the rest of us who have worked very hard since last summer to keep the teacher’s union from sinking our ship. Now we have to fight a hostile governor as well, and she has no qualms about lying through her teeth about how it’s going to bankrupt the state.

She doesn’t care if ESAs save money, she cares about keeping children in their system so they can be propagandized.