Online geography challenge recognizes “Palestine” that includes all of Israel within its pre-1967 borders. 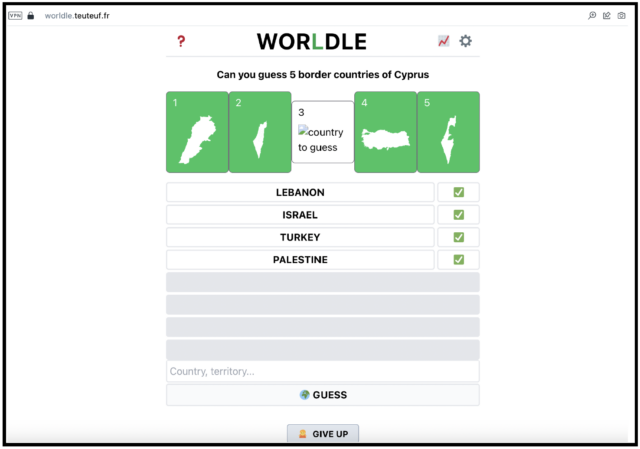 The website worldle.teuteuf.fr contains a daily geography quiz. Players receive six tries to guess the country or territory pictured. After correctly identifying the country, players have the chance to guess the featured country’s neighbors.

On January 9, the featured country was Cyprus. (The entire island was pictured, with no mention of its de facto division since 1974.)

After identifying Cyprus, this author moved to the second part of the challenge: identifying Cyprus’ neighbors. Five boxes were shown, although one of them (item #3) contained no picture. The author identified Lebanon (item #1) and Turkey (item #4). 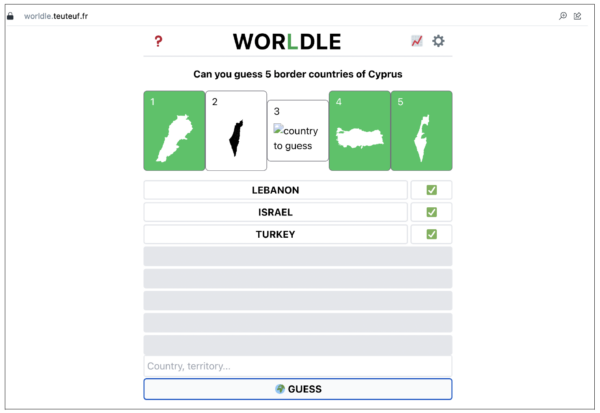 The oddest part of the challenge was item #2. This item portrayed all of modern Israel, including the part included in item #5. (It even seemed to include the Golan Heights, or at least, it included the entirety of the Sea of Galilee and the land around it.) What could it be?

Worldle.teuteuf.fr identified it as Palestine. 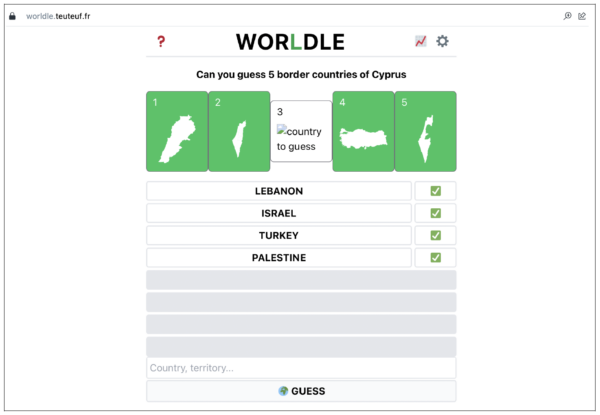 What is shocking is the website’s identification of “Palestine” as including all of Israel. This is what Israel-haters mean when they refer to Palestine “from the river to the sea.” The “river” is the Jordan, and the “sea” is the Mediterranean. That includes all of pre-1967 Israel. What the phrase means, and what the picture means, is that Israel should not exist at all, that it is really part of Palestine.

A short time after discovering worldle.teuteuf.fr’s politics, this author found that the list of neighbors in the daily quiz had been altered to include just three countries: Israel, Lebanon, and Turkey. “Palestine” no longer showed up. (Interestingly, neither the “before” nor “after” versions included Greece.)

Here’s how it showed up in Safari: 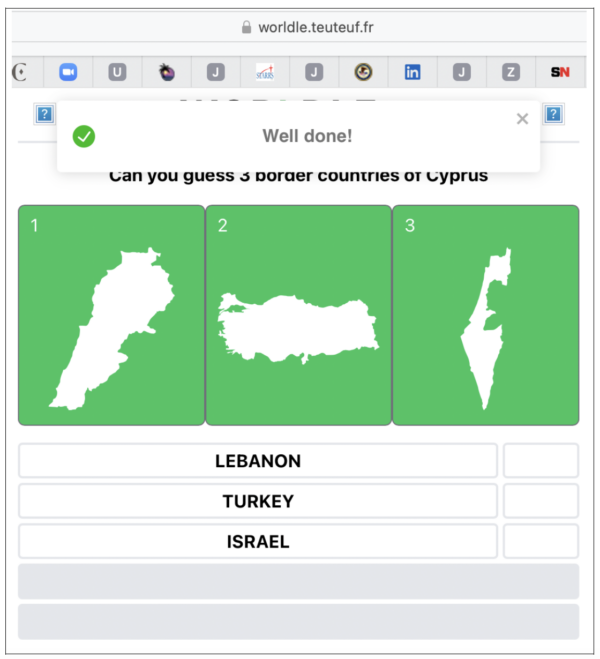 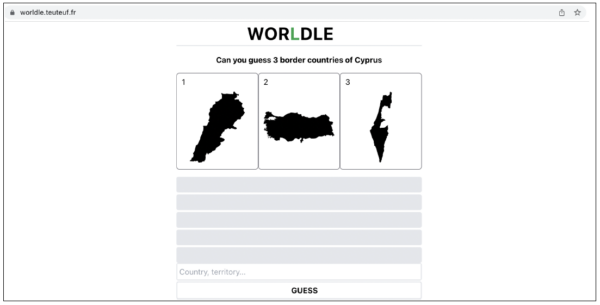 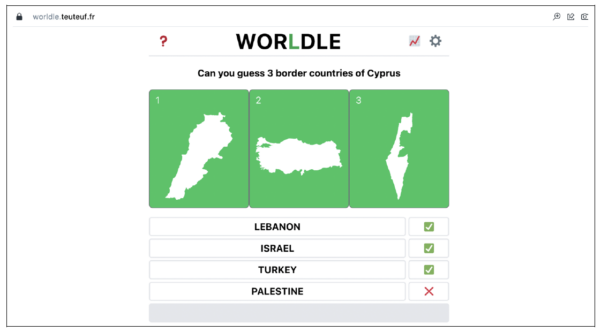 LIF has not been able to determine who owns the https://worldle.teuteuf.fr website, although according to whoislookup, worldle.com is registered by Dynadot LLC. All other information about worldle.com is “redacted for privacy.” Dynadot is a privately held ICANN-accredited domain name registrar and web-hosting company headquartered in San Mateo, California.

Well… it IS French.

Not to mention California.

There isn’t a nation called ‘palestine,’ and never has been. There are no ‘palestinians,’ and never have been. It’s a made up people group. They are, in fact, Arabs – mongrel Arabs that no other country desires within their borders.

Palestinians are pets to the left.

This is a sample of European Antisemitism. The French Jews are moving from France and making aliyah to Israel (immigrating to Israel). Israel needs to declare the EU as a funder of terrorist organizations, Fatah, Hamas, and have Russia do the rest, namely destroy NATO which it is doing quite well in Ukraine.

I would assume they meant Mandatory Palestine (which no longer exists), except that that did not include the Golan Heights.

And it originally included what is now Jordan. So why would you assume anything?

The original 1920 mandate for Palestine included only Cisjordan. Transjordan was added to the mandate in 1921, but immediately split off as a separate area to have a different name, to be governed by the Hashemites, and from which Jews were to be excluded. There was never a time when a territory known as “Palestine” included Transjordan.

If they were looking for a map of “Palestine” the most likely map they’d have found would be of Cisjordan as it existed from 1920 to 1948. But it would not have included the Golan Heights, so that’s not the explanation.

Ah, another comment from the person whose entire view of right and wrong depends on whose ox is gored, to the extent that he can’t even understand the concept that decent people don’t think like that.

Russia declared they had annexed Crimea after invading and occupying it; one in a series of “This is Muh Russia, now.” armed grabs over the last 20-ish years. Russia claimed it annexed the newly occupied hunks of Ukraine, with international relations types talking like declaring “mine” with tanks had some kind of legal standing.

I don’t see a lot of “Get back to old borders.” leveled at Russia, I still don’t see much — ?any? — “Hey, get out of Georgic, Chechnya, and the rest too, while you’re at it.” around notional end states for their current war, or ever.

Is Israel’s problem that they take the territory after they’ve been invaded from it vs. invading first?

As Hannah Arendt made clear in her “Eichmann in Jerusalem, the Banality of Evil”, the French Milice were the most aggressive police rounding up Jews who had fled to France from German occupied Europe and then turning them over to the Gestapo for extermination. That said, Arendt also notes that the French were rather protective of “their own” Jews.
It would appear that the mentality that drove the Milice is again dominant in La Belle France.

The Israeli government demand that the Palestinians recognize Israel as a Jewish state is the single most difficult issue facing the current round of peace talks. It would be dangerous to recognize Israel because this would mean their acceptance of the dissolution of their own history and ties and their historic right to Palestine. One of the crucial pieces to the Palestinian narrative is that they (Palestinians) were present in the Holy Land before the Jews, and because of this, have a greater moral authority and right to the territory as part of a future independent Palestinian state. Supporters of the Palestinian position often compare the Palestinians to “indigenous” peoples like Native Americans and call Israel a “colonizer.” There are more than a few problems with the Palestinian narrative.
The modern media is filled with stories about the Palestinians, their plight, their dilemmas and their struggles. All aspects of their lives seem to have been put under the microscope. Only one question never seems to be addressed: Who are the Palestinians? Who are these people who claim the Holy Land as their own? What is their history? Where did they come from? How did they arrive in the country they call Palestine? If the Palestinians are as ancient a people as they claim to be, then we’ll find copious amounts of evidence of that in various works of history, won’t we? (Just like we find lots of history about the ancient Romans, Greeks, Albanians, Mygars, Bulgars, Egyptians, and a whole host of others).
But here’s where it gets interesting, because as it turns out, the “ancient” Palestinian people are elusive indeed. In fact, they’re so completely elusive that at some point, when pouring over the historical record and finding exactly nothing…no mention of them at all in ancient times, you have to begin to ask yourself why that is. The general impression given by most in the media is that Palestinians were established in the Holy Land for hundreds, if not thousands of years. Yet curiously, when it comes to giving the history of this ancient people most news outlets find it harder to go back more than the early nineteen hundreds. Some examples:
– CNN, an agency which has devoted countless hours of airtime to the “plight” of the Palestinians, has a website which features a special section on the Middle East conflict called “Struggle For Peace”. It includes a promising sounding section entitled “Lands Through The Ages” which assures us it will detail the history of the region using maps. Strangely, it turns out, the maps displayed start no earlier than the ancient date of 1917.
– The CBS News website has a background section called “A Struggle For Middle East Peace.” Its history timeline starts no earlier than 1897.
– The NBC News background section called “Searching for Peace” has a timeline which starts in 1916. – BBC’s timeline starts in 1948.
Go to the website belonging to the Palestinian National Authority to find out about the ancient Palestinians? After you wade through several pages bemoaning the “Israeli occupation” and “Israeli human rights violations,” you find yourself wondering where the history is, and you will find a little, some of it even dating back to the early 1900’s, but it would be a bit of a stretch to call this “ancient,” no matter how much you torture the definition of the word.
So it begs the question: If the Palestinians are indeed a myth, then the real question becomes “Why?” Why invent a fictitious people? The answer is that the myth of the Palestinian People serves as the justification for Arab occupation of the Land of Israel.