Americans, concerned about the seeming deterioration in air safety, have issues with Transportation Sec. Pete Buttigieg. 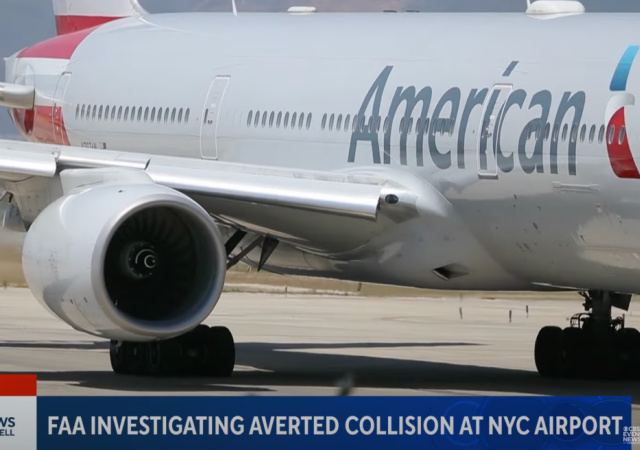 On Friday night, an American Airlines plane crossed about 1,000 feet ahead of a Delta flight about to depart from New York’s Kennedy International Airport. Only a quick-acting pilot prevented this near-miss from being a transportation disaster.

The American Airlines plane, Flight 106, bound for London with 137 passengers aboard, was proceeding along a taxiway about 8:45 p.m. when it came near a spot where two runways cross perpendicularly, according to Ross Feinstein, a former spokesman for both the Transportation Security Administration and American Airlines who said he had reviewed publicly available radar and recordings.

The Delta plane was waiting to take off on Runway 4 Left, which is intersected by Runway 31 Left.

An air traffic controller can be heard telling the American plane, a Boeing 777, to “cross Runway 31 Left,” which would require it to turn right before coming around to line up for departure on Runway 4 Left behind the Delta plane.

But the American flight, instead of turning right to cross Runway 31 Left, jogged left then right and proceeded straight across Runway 4 Left as the Delta plane began its takeoff, the radar shows, according to Mr. Feinstein.

The Delta pilot was forced to abruptly brake, traveling another 661 feet before he came to a complete stop with just 1,000 feet to spare before the plane would have collided with the American Airlines Boeing 777. Both the Federal Aviation Administration (FAA) and National Transportation Safety Board (NTSB) are investigating.

The agency told CNBC the information is subject to change.

The National Transportation Safety Board said in a tweet Sunday that it is also investigating the incident.

NTSB is investigating the Jan. 13 runway incursion at JFK airport involving an American Airlines Boeing 777 and a Delta Boeing 737.

One has to wonder if the social justice emphasis on hiring air industry professionals plays a role. Or perhaps, as with the case of the recent air crisis, bad software is to blame.

Had a chance to thank some of the ATC personnel whose quick action on Friday night at JFK reminds us of the importance of all the vital work that takes place every day to keep air travel safe. https://t.co/FxzOescyOW

Americans, concerned about the seeming deterioration in air safety, had issues with Buttigieg.

Sec, this is going from bad to worse. Time to get it under control. What’s the plan? Is there a plan? Need a presser.

Shocked you had since you are still worried about racist bridges and interstates.

Meanwhile, Buttigieg’s string of bad luck is being noticed.

During the 40-year-old Buttigieg’s tenure, there have been widespread global supply chain issues and logjams at major ports, multiple instances of mass flight cancellations by airlines and a narrowly avoided nationwide strike by railroad workers that was only averted by an eleventh-hour intervention from Congress.

The latest transportation mishap was the most high-profile yet.

On Wednesday morning, a malfunction in an obscure and apparently obsolete internal system called the Notice to Air Missions, or NOTAM, forced the temporary grounding of all air traffic in the United States. The move touched off a cascading snarl that resulted in the cancellation of more than 1,300 flights and the delay of 9,000 more. It was the biggest shutdown of U.S. aviation since the attacks of Sept 11, 2001.

…The trials and tribulations of his current assignment have reached the point where White House press secretary Karine Jean-Pierre had to address questions on Wednesday about Biden’s confidence in Buttigieg’s performance.

Biden, she said, “respects the secretary and the work he has been doing.”

The phrase damned with faint praise comes to mind.

I’m not sure this is rare. I was on a flight that aborted it’s landing due to traffic on the runway. It’s remarkable how much power the planes have in an emergency.

… But the American flight, instead of turning right to cross Runway 31 Left, jogged left then right and proceeded straight across Runway 4 Left as the Delta plane began its takeoff, the radar shows …

Howsit Pete is congratulating the ATC when obviously the hero is the fast acting Delta pilot?

“One has to wonder if the social justice emphasis on hiring air industry professionals plays a role. Or perhaps, as with the case of the recent air crisis, bad software is to blame.”

Or maybe brain fog from the vaxxes that Davos participants ensure their pilots have never taken.

Came here to note this too. After listening to the voice recordings, it appears the incident was averted by the Delta pilot spotting the 777 on his runway yellowing “Ship! Ship! Ship!” (with a different letter) on the radio. The tower response was an instruction to abort takeoff. Not the other way around.

I don’t know enough about ground control to have an informed opinion about whether ATC should have spotted this problem earlier. Even if they followed procedure perfectly, this, like many instances, presents an opportunity to review that procedure so there is not a similar incident.

Female co pilot should have seen the Delta out her window. I was reading a thread where a bunch of pilots were dissecting the near miss. They were all agreed you should never cross a runway without very carefully checking both right and left sides to be absolutely positive no airplane is on or about to land on your runway.

On a side note, I read two items on pilots.
One is that the elite with their private jets are now demanding their pilots NOT be vaccinated.
The other was the FAA changed some parameters for pilots due to an increase in heart problems since the vaccination was required.

Did ATC even spot this developing problem and alert anyone? It’s not reported in the article. If not, then rather than praising ATC, we should be investigating them. Or is it not someone’s job up there to watch what’s happening on the ground?

In the thread I mentioned above the controller yelled out SHIT! which the pilots all said would have gotten their immediate attention that something was wrong.

Hit enter too quick. Wanted to add the pilots all said the controller would get a reprimand from the FAA, but later on he’ll get a trip to Las Vegas to accept a hero award for his actions.
From some of the other comments it sounds like the Delta might have burned up the brakes trying to stop and maybe an engine part or two.

Misunderstanding followed by no failsafe. A row of red lights across the runway/taxiway hold points for instance.

“One has to wonder if the social justice emphasis on hiring air industry professionals plays a role.”

One wouldn’t wonder long though.

Pete Butthead was put in place for a reason.

The Chicomms really planned this out well. Biden is their crowning achievement in their war against the US.

Usually nitwits and donors get ambassadorships to cush locations.

More Fed incompetence at work. I am so glad i don’t need to fly anymore with these retards in charge.

The guy who couldn’t get pot holes filled in his little town, can’t orchestrate a pan-continental air transport system of 10,000s of flights a day? Rail scheduling? Truck transport from ports? A distributed, multi-continent, multi-modal manufacturing and resource supply chain?

Time to replace him — certainly there are diversity boxes the administration hasn’t checked yet.

Here is the airport diagram for JFK:
https://opennav.com/airport/KJFK
Unfortunately, the above does not make clear where American 106 was located when it was told to “cross 31 Left”.
I there must speculate, see airport diagram, that American 106 was on taxiway Alpha, should have used taxiway Kilo to cross 31 Left and eventually reach the departure area of 4 Left, but instead took taxiway Juliet across 4 Left, which invited a collision with the Delta flight, rolling on 4 Left.
Everyone was very lucky.

Anything air related I visit Blancolirio (Juan Brown) a 777 pilot and blogger.