Excitement Builds as Comet Approaches Earth for First Time in About 50,000 Years

Excitement Builds as Comet Approaches Earth for First Time in About 50,000 Years 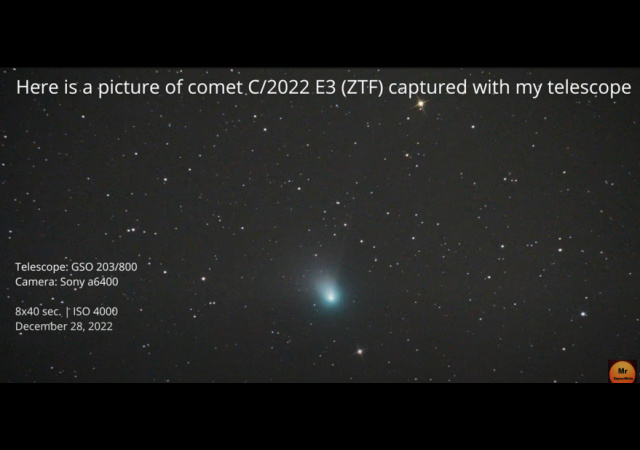 Excitement among sky-watchers is building as a comet, not visible since the time of the Neanderthals, is heading towards Earth again.

E3 was discovered in March, but scientists recently snapped the first detailed photo revealing its brighter greenish coma and a yellowy dust tail.

While the comet is too dim to see without a telescope, it should be visible to the naked eye when it is roughly 26 million miles away.

C/2022 E3 (ZTF) is a long-period comet believed to come from the Oort Cloud, the most distant region of Earth’s solar system and consisting of icy chunks of space debris. The comet was discovered a year ago, and scientists have been studying it since.

We don’t have an estimate for the furthest it will get from the Earth yet — estimates vary — but if it does return it won’t be for at least 50,000 years,” [Jessica Lee, an astronomer with the Royal Observatory Greenwich] said. “…Some predictions suggest that the orbit of this comet is so eccentric it’s no longer in an orbit-so it’s not going to return at all and will just keep going.”

Astrophotographer Dan Bartlett managed to capture an image of the comet in December from his backyard in California. He was able to see “intricate tail structure” in the comet’s plasma tail, he said, and “conditions are improving.”

Space experts are offering the best tips for viewing the comet.

Observers should look for C/2022 E3 (ZTF) when the moon is dim in the sky, with the new moon on Jan. 21 offering such an opportunity, weather permitting. According to the website Starlust (opens in new tab), the comet will be in the Camelopardalis constellation during its close approach.

For completeness in this article, I must point out that comets have been viewed as bad omens.

“Comets have a long history, usually as omens and bearers of bad news,” says Woody Sullivan, professor of astronomy. “But on the other hand, the death of Julius Caesar was marked by a comet and this was taken by the Romans as a sign of his divinity. And Napoleon made a fuss about the appearances of comets and some of his early military victories.

“‘Awe-full’ might be a better way to describe the impact of comets. It is often taken to mean dread, but it also can indicate greatness.”

Caesar and Napoleon aside, comets generally have been regarded unwelcome visitors over the years.

Pope Callixtus III excommunicated Halley’s Comet in 1456 as an “instrument of the devil,” and in the following century the appearances of comets were seen by Inca and Aztec astrologers as signs of divine wrath leading to the downfall of those empires to Spain. The 1835-36 return of Halley’s Comet was said to have caused a large fire in New York, a Zulu massacre of Boers in South Africa and the Mexican slaughter of Texans at the Alamo. In 1910, charlatans sold “comet pills” and “comet insurance” and a number of fearful Americans tried to board up their houses as protection against poisonous cyanide gas as the earth passed through the tail of Halley’s comet.

The timing of the comet’s appearance is concerning in light of the Legal Insurrection Author’s rather dire predictions for 2023.

Who knows, maybe this comet can bring on the disappearance of the entire ‘progressive’ movement.

Or, at least we can get them to all go Heaven’s Gate for us, right?

How bout it ! Is this haleys Comet or has THAT been renamed too? I mean this is so important they named sink cleanser after it!

Night of the Comet

If you haven’t you should

Excitement Builds
Yes. “Oh, Sweet Meteor Of Death, please come and take us soon, we pray, that we might not suffer longer under the terrible care of our ‘betters’.”
That sort of excitement.

Why no discussion on LEGALinsurrection.com regarding Brunson v. Adams? This could be the most important legal challenge to date against the fraudulent 2020 election.

They will dismiss it, you know they will. That it got this far is a miracle

No, it’s not a miracle. It “got this far” simply because some idiot decided to mail it in. The post office delivered it, it was received, stamped, and logged in; that’s as far as it has got, and as far as it will get. Anything can get that far. The moment anyone considers it, it will be tossed.

What remedy are they seeking?

No, the case has not been docketed, and never will be. It’s completely frivolous on its face, and will be tossed into the circular file as soon as it comes up in conference. The author of the article you linked to is so ignorant he doesn’t even know the difference between articles and amendments. And he has certainly never heard of the separation of powers, the speech and debate clause, or the political question doctrine.

There may be some value in the case, but opf what I read it looks like it was written by a sovereign citizen.

If it’s visible from New Jersey then Neanderthals can still see it.

Then again, maybe not.
.

Do we actually have a metric of the level of excitement the last time this comet came a knockin’ ?

Comets are only unwelcome if they decide they want to become a permanent resident of Earth or its neighbors.

And can we give it a better name than ZTF?

FTX? Where your money evaporates into space.

Closest approach to Earth is on Feb. 1, 2023, but optimal moonlessness is the week around January 20.

Interactive sky chart for any date and time is here (make sure to set your location).

The news seems to be making a big deal about the comet being green, but almost every comet I’ve personally viewed in my life has been green.

“Pope Callixtus III excommunicated Halley’s Comet in 1456 as an “instrument of the devil,”

So it could no longer attend Mass or eat eucharists? Oh, noes! Who baptized it in the first place?

Lord SMOD; yr late. The election was a couple months ago.

Enough about Comet. What about Rudolph and Blitzen? 🙂

I’ll give the comet a 5 star review on Amazon if it hits DC.