“Under the proposed legislation, Disney will no longer control its own government, will live under the same laws as everyone else, will be responsible for their outstanding debts, and will pay their fair share of taxes.” 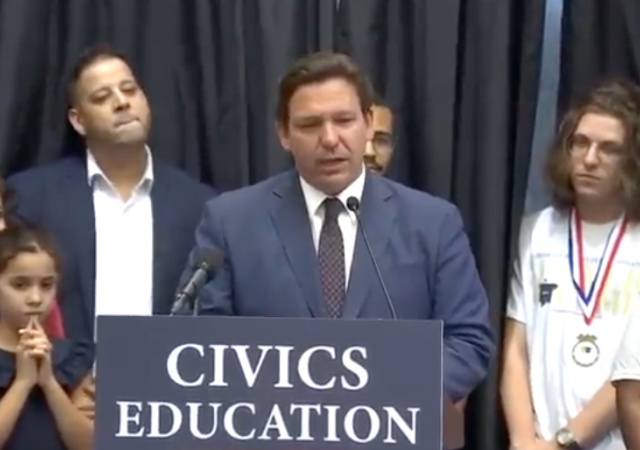 The Florida Legislature will receive a bill with a plan to dissolve Disney’s jurisdiction, Reedy Creek Improvement District, and absorb it into the state.

Gov. Ron DeSantis put the plan into motion when he “signed a measure into law dissolving” after Disney lied about the Parental Rights in Education bill. The bill does not say “Don’t say gay” in it.

“The corporate kingdom has come to an end,” DeSantis’ communications director, Taryn Fenske, told Fox News. “Under the proposed legislation, Disney will no longer control its own government, will live under the same laws as everyone else, will be responsible for their outstanding debts, and will pay their fair share of taxes.”

“Imposing a state-controlled board will also ensure that Orange County cannot use this issue as a pretext to raise taxes on Orange County residents,” she added.

The planned legislation will also ensure that the company will pay upwards of $700 million dollars in unsecured debt accumulated by Disney’s special jurisdiction — known as the Reedy Creek Improvement District — and not Orange County taxpayers, according to the sources.

Good. The taxpayers shouldn’t be punished with more taxes or pay Disney’s debt.

The Reedy Creek Improvement District (RCID) was formed in 1967. Walt Disney pushed for the formation because he did not like businesses and other places popping up near his dynasty. It encompasses the cities of Bay Lake and Lake Buena Vista, along with unincorporated land. Landowners elect the Board of Supervisors who govern the district. The five members are senior Disney employees.

Disney employees and their immediate families reside in the cities, so the district’s population is small. But the district includes “4 theme parks, 2 water parks, 1 sports complex, 175 lane miles of roadway, 67 miles of waterway, the cities of Bay Lake and Lake Buena Vista, an environmental science laboratory where the continuity of water quality is monitored, an electric power-generating & distribution facility, a natural gas distribution system, water and wastewater collection & treatment facilities, a solid waste and recyclables collection & transfer system, plus over 40,000 hotel rooms and 100’s of restaurants and retail stores.”

The website provides details on how they govern the district. But right now, the district is exempt “from a host of regulations and certain taxes and fees related to emergency services and road maintenance.”

Sounds like Disney was making more money on RCID than they were on the amusement park.

I don’t mind it being incorporated as a Florida community, maybe even carving it out into its own county. But it shouldn’t be exempt from the state laws. Period.

The Happiest Place on Earth!

There are other sites with the articles you seek.

Bear, I couldn’t stand it if I missed one. 🙂

You seem oddly hypersensitive to articles about DeSantis. I don’t get it. You don’t like the guy; that’s fine and is your prerogative, but, your need to constantly harp on the subject to underscore your feelings is just massively oversensitive. I reserve my ire for the vile Dumb-o-crats, where I think one’s energy and attention are more properly placed.

It seems that she believes her attempts to smear DeSantis will somehow make Trump look better. Somehow.

She, like all Trump’s remaining desperate supporters, can’t hold Trump up at this point, so she has/they have to tear DeSantis down.

The truth is that they make Trump look even worse because his supporters are . . . so singularly unappealing.

Uh…many of us support both, Fuzzy and are not desperate. Sorry we are unappealing to you. Please don’t fall into the trap lumping all people into the “them” group and disparaging them. Trump did great things in office the primary being ripping the secrecy away from the MSM and Deep State exposing them for who they are. DeSantis is a stud doing great things for Florida and hopefully America at some point

Oh go away and live in your little insular world

I thought I had heard they might be backing off on this. Glad to see I was wrong.

Gonzo, you are totally right, that the southern border IS the FIVE-ALARM FIRE threatening our republic. Can’t believe how little is done about it.

Careful, you might get burned at the keyboard with that kind of positive support for me lol 🙂

You used to be a good and fun commenter, but that . . . has changed. “Positive support” for you is hard to come by, though I still try to support you by pointing out when you are being less than honest. After all, how can you be believed if your “facts” are complete fantasy?

If you gotta “carve out” space from the state’s meddling for people to get stuff done, maybe what the state’s doing isn’t so helpful. Maybe the state shouldn’t be doing that anywhere; or that way.

One imagines governance that holds space where people can do more of what they themselves want. Security vs. prohibition. Autonomy vs. direction. Buying pools for common services vs. forced purchases of stuff you don’t want but good for the sellers.

This same goes for cities and counties, authoritah within states, countries (people flee), associations of nations (that threaten and sanction to keep folks in), “world” organizations casually ignored, and NGOs. If the people you would direct don’t swarm to your orchestration, maybe they’ve figured out they are to you livestock to be herded for the benefit of your co-farmers.

“Four legs good, two legs better!” doesn’t work out the same for everyone.

Publicity stunt, a reason not to trust DeSantis. Disney took care of their own infrastructure needs and now the state has to, adding a level of inefficiency and waste. Everybody’s worse off except DeSantis.

Do you live in Florida? What are you talking about? You sound more like John Fetterman than an intelligent person.

“Disney will live under the same laws as everyone else”

What a revolutionary idea!

As a Republican and a resident of Florida who at one time lived in a Congressional District where Ron DeSantis was my congressman, it was well known in inner circles that once you “piss-off” Ron and Casey, there is no second chances. Disney, either did not know this or forgot this. This is not a surprise to “stick it to Disney”. The question is, who is next?

Sort of. Disney was also building nothing from swamp and unused farmland so wanted a free hand to do what they wanted which would also benefit Florida. Good deal at the time, not so much now that the woke mob took control.

You reap what you sow, Disney. Good luck with that.

Well I guess Disney is firmly in the “finding out” stage 😂😂

I feel that Disney used it’s assets and huge media reach – not just ESPN/ABC/etc. but the fact that it has a large fan base and tentacles that stretch the globe – to stand on a political soapbox in a global town square and went from being a Grey Man or neutral citizen to a biased and loud Political Action Committee. At that point the freedoms and benefits it was afforded came into the equation. Its war chest, land holdings, and global megaphone are not compatible with a truly sovereign territory – RDC – contained within a state of this nation. Any state.

I and my family have many fond memories of the days and weeks we’ve spent at Walt Disney World and their other properties in the past. Their actions of the last decade or so have clearly discolored those photos in my mind. Disney has crossed many lines and should have been the purest most neutral apolitical fun- and dream-centered fantasy world. But instead it showed that hidden under its suits and ties and gingham dresses were in fact chains, gag-balls, nipple rings, cross dressers and transsexuals. And some perverts who have actually been arrested. Talk about a wolf pack in sheep’s clothing.

DeSantis and Florida are taking the right steps. Disney should be more than ashamed. They need to come clean, apologize, and never forget this dark period. Since it seems like the world is approaching the decadence of the biblical Sodom and Gomorrah, I am not holding my breath. I don’t see things improving any time soon, if ever. May God Help Us.

purest most neutral apolitical
But there’s where you’re misled. It’s not political so much as religious. They are progressives, and seek to indoctrinate everyone’s children into progressivism. Progressivism has simply inclined more towards its less wholesome aspects of late, so you begin to see the end game.

Isn’t this Florida? Like are they going to Disney?
I thought Ron would be on top
Of this and round them up and ship
Them
To DC

Maybe he should have left Disney to it’s own little fiefdom and shipped the illegals there. Even better considering Disney’s turn to wokeness, identify all the gay and trans illegals and send them to Disney. Let’s see the House of Mouse deal with that one.

“DeSantis is ordering airplanes and helicopters from the Florida National Guard and moving additional resources from the state’s Fish and Wildlife Conservation Commission’s marine patrol to ” support water interdictions and ensure the safety of migrants attempting to reach Florida through the Florida Straits.”