“…there are no more buses scheduled for migrants from Denver to Chicago at this time, and the final chartered transportation to New York City will be successfully completed tomorrow [Sunday].” 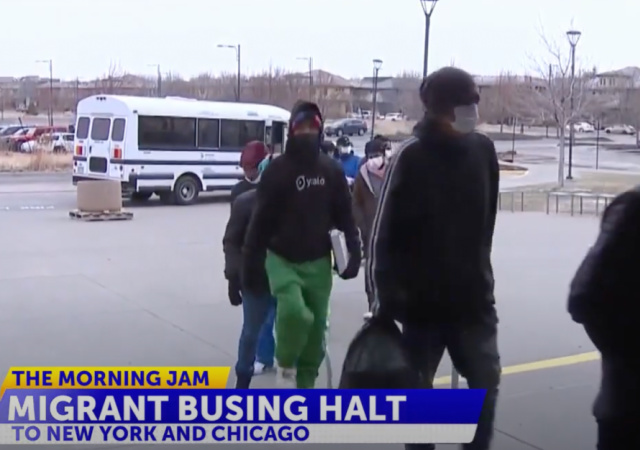 Colorado Democratic Gov. Jared Polis announced on Saturday that he would stop busing migrants to Chicago and New York City after “a very productive conversation” with the mayors.

Polis’s statement hit the federal government for its lack of action on immigration reform and border security. He also said the state would not stop migrants from traveling elsewhere if they choose not to stay in Colorado:

“People fleeing violence and oppression in search of a better life for themselves and their families deserve our respect not political games and we are grateful we have been able to assist migrants to reach their final destination. We refuse to keep people against their will if they desire to travel elsewhere. While the federal government and Congress, unfortunately, have failed the American people on immigration reform and border security, Colorado continues to assure culturally competent and humane support to help assist migrants escaping oppression.”

Also, the Governor had a very productive conversation with Mayor Adams and Mayor Lightfoot today where he shared that there are no more buses scheduled for migrants from Denver to Chicago at this time, and the final chartered transportation to New York City will be successfully completed tomorrow. The state is partnering with the city of Denver and non-profits to continue assisting the city of Denver to continue to ensure this process is being conducted in a humane manner. Now that nationwide travel has returned to the status quo because the holidays and the impact of weather have normalized transportation pathways, Colorado has been in the process of scaling back this transportation.

Polis has been sending migrants to other cities “for weeks.” Denver has seen “more than 3,500 migrants” in the past month while “each night 1,800 asylum seekers have sought shelter in the city.”

Colorado earmarked $5 million to help migrants with costs. But since 70% of the migrants want to travel elsewhere, “the cost of helping them purchase bus tickets constitutes a fraction of the overall pot of cash.”

Polis wanted to escalate the busing after a winter storm paused travel arrangements for the migrants.

NYC Mayor Eric Adams and Chicago Mayor Lori Lightfoot, who made their cities sanctuary cities, threw a hissy fit even though Polis only sent those who wanted to go to those cities:

We urge you to follow the best practices set by the U.S. Department of Homeland Security that identifies receiving states as leads in providing housing and wrap-around services to asylum seekers. Additionally, the city of Denver is known nationally for providing some of the best services for unhoused populations—setting best practices throughout the country—it is unusual that you would deprive new arrivals from accessing those resources. In fact, many new arrivals from Colorado had been in your care for weeks, receiving services, and establishing connections only to be uprooted with a promise the receiving cities cannot keep.

To reiterate, you must stop busing migrants to Chicago and New York City. In the case of family reunification, let us work together to ensure that people are reconnected with their loved ones, however sending migrants to our cities whose systems are over capacity, where they may struggle to find shelter and other services is wrong and further victimizes these most vulnerable individuals. These actions do not live up to the values of a proclaimed welcoming state and should stop immediately.

Instead, let us work together to advocate to the federal government for a national solution that responds to this need. New York City and Chicago have always been cities of immigrants. While we are all grappling with a manufactured humanitarian crisis, we must all come together to address this nationwide problem and look forward to working together to meet this challenge.

Good thinking. Keep them in Colorado.

He has to keep them, red states will send back double the number.

But they want to be warm

There’s always Florida, Ron will handle it, he may send “one” more plane or bus to Martha’s… that was cute, in 24 hours they were out of there and getting air kisses..

Cause Abbott won’t ( don’t tell me
About the buses, I’m tired of the buses, it’s .1 % of a days alien problem) SHIT THE BORDER DOWN!!!

Biden and the globalists don’t give a sh!t as long as they are “in”, but not around them of course, never there

Ar e they so stupid they don’t know the President of Mexico is part of the Cartel?

Bend the knee, they will
Be lucky to get back to their own countries with their Cajones intact

What’s TX supposed to do? Buses are no worse than airplanes for sending a lot of people and maybe better. Cheaper. It’s amazing that the moderate sized city of El Paso is supposed to deal with a flood of them, but NYC has a fit over a few buses worth.

Didn’t clear it with the star chamber first huh?

If Colorado is involved in any busing, it should be receiving migrants bused from El Paso and other border towns. As a sanctuary state, they have no right to complain about additional migrants.
https://worldpopulationreview.com/state-rankings/sanctuary-states

The ‘politicized busing’ party line is pretty much just that. Most of these buses and the vast majority of migrants are being sent to re-unite with family already settled in the U.S. The ones we are currently seeing have over half wishing to reunite in New Jersey. So NY is closest to their family.

The illegals arriving to Denver aren’t being bussed in from Texas or from Florida: they are showing up on their own (mostly from Venezuela).

New Jersey, Assachustts, DC, and California are all good destinations.

send them to Detroit

Guess who woke up to a pronghorn head under the covers.

The funniest part is that Gov Polis signed a bill making CO a ‘sanctuary state” less than three years ago!

He is not laughing now.

That “very productive conversation” probably amounted to Adams and Groot telling Polis, “If you know what’s good for your health, don’t send no more of those people. Understand?”

He is an obedient little Lefty, though – isn’t he. Hops to with a quick “how high?” when told to jump.

Being declared “unmutual” is a death sentence to a hive animal.

OK, then how ’bout Delaware and DC?

I still think Martha’s Vineyard was perfect. The hypocrisy of the Libs was to die for.

Yes, expensive but worth it. No need for such an expensive repeat, we already saw the hypocrisy and it’s recorded for posterity.

He got a phone call from Commie-Central reminding him of his oath to them.

The democrat response to unfettered illegal immigration they can’t deal with is to make them all legal and throw open the border door. So stupid you can’t even satirize them.

The language used is interesting: ‘Receiving States’ as ID by DHS are to provide wrap around housing and support services. That’s a thin reed. In 2025 with a new POTUS that set of best practices may change. Check a r Majority in both HoR and Senate could alter the statutes and provide clear directives taking that discretion, if any exists, out th hands of the DHS.

IMO, the easiest route to change the equation is to pass legislation requiring an actual sponsor for every individual permitted to remain pending a final immigration or asylum decision. Require a single person to be financially responsible for the claimant to meet their housing needs, healthcare bills, school attendance and other costs as well as be responsible for locating them.

The various lefty orgs can figure out how to reimburse these sponsors if they wish. I have no doubt such a common sense measure would be vigorously opposed by the lefties b/c it would quickly demonstrate that the willingness to become personally accountable is not very broad. Much easier to offer support

Typical Left: declare themselves sanctuary cities, and then try to get rid of anybody who actually tries to take them at their word.

If nothing else, this shows how trustworthy the words of a Lefty are.

Or putting themselves in charge of your health, and then offering mainly euthanasia.

Suddenly it’s not kidnapping and the soft gloves come on when it’s a Democrat involved.