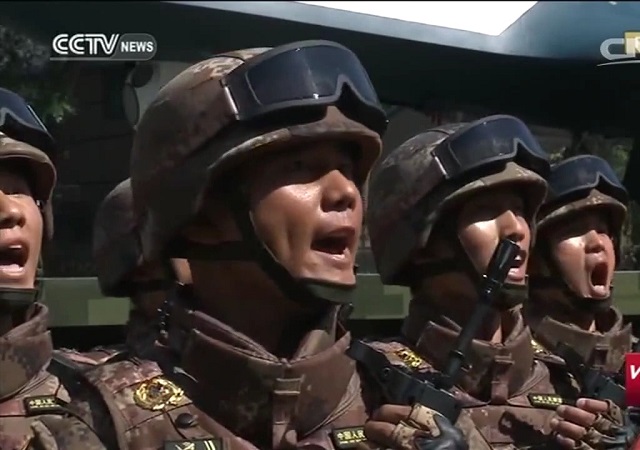 Chinese President Xi Jinping has order the People’s Liberation Army to step up combat readiness along the country’s 2100-mile-long border with India.

In a video conference with the Chinese forces stationed at the China-India border, the Chinese leader asked the military to remain “ready for combat,” media reports say.

“Xi spoke to the Xinjiang border command, a Chinese navy formation and an air force aviation brigade, asking them to “remain alert and be ready for combat”,” the Indian newspaper Tribune reported Friday.

The conversation between the Chinese President and the troops took place on Wednesday. Xi spoke to the Xinjiang border command, a Chinese navy formation and an air force aviation brigade, asking them to “remain alert and be ready for combat”.

Basing himself at the PLA headquarters in the capital, Xi’s only conversation with PLA ground forces was with troops at a border defence station in Khunjerab under the Xinjiang military command. Xi is also the commander-in-chief of the PLA.

Xi’s statement comes after last month’s border clash between the two nuclear-armed Asian countries. According to official sources in New Delhi, their troops repulsed a Chinese attempt to push into Indian territory. Several dozen Indian soldiers were reportedly wounded in the incident

In early December, hundreds of Indian and Chinese troops engaged in fistfights, and fought with sticks and improvised weapons since bilateral agreements forbid both sides from using firearms during close encounters.

But such clashes can also turn deadly. In June 2020, at least 20 Indian soldiers were reportedly killed in one such clash. Since the war of 1962, in which China took large parts of Indian territory, skirmishes have continued along the two thousand mile-long contested border.

The DC-based Foreign Policy journal reported the details of the recent clash:

In the early hours of Dec. 9, a few hundred Chinese soldiers armed with batons, spikes, and other primitive weapons tried to dislodge an Indian Army outpost on a ridge on the disputed border between India’s easternmost state, Arunachal Pradesh, and Tibet, which is governed by China. The Indian Army warded off the attackers, but the clash was fierce, injuring 34 Indian soldiers.

Both countries have been consolidating military cooperating since New Delhi — under former President Donald Trump’s watch — joined the U.S.-led Asia-Pacific alliance, or Quad. The four-nation alliance, comprised of the U.S., Australia, Japan, and India, is seen as a counterweight to China in the region.

India and Japan kicked off their first-ever joint fighter aircraft exercise on Monday as the two strategic partners continue to deepen defense and security ties amid growing concerns over China’s assertiveness in the Indo-Pacific region.

Japan and India, which are members of “the Quad” grouping of nations alongside the United States and Australia, are not only enhancing their own defense capabilities but have also been deepening security cooperation in recent years. Tokyo and New Delhi are also considering expanding their partnership to include defense equipment and technological cooperation.

The joint air drill angered Beijing, with the Chinese Communist Party (CCP) accusing both countries of building an anti-China alliance. “Japan and India on Monday launched their first joint fighter jet exercise, a move analysts said exposed the two countries’ growing military ambitions against China under the instigation of the US,” the CCP mouthpiece the Global Times commented.

Translate: Xi is in trouble with the ‘people’ so what is needed? War with a neighbor.

After celebrating Chinese New Year, he looked at the moon and saw the time is right.

I wonder if Chinese military equipment is of the same crap quality as their other products? If so, it’s probably rusted and unusable.

“In the early hours of Dec. 9, a few hundred Chinese soldiers armed with batons, spikes, and other primitive weapons tried to dislodge an Indian Army outpost”
Boxer Rebellion much?

“…hundreds of Indian and Chinese troops engaged in fistfights, and fought with sticks and improvised weapons since bilateral agreements forbid both sides from using firearms during close encounters.”

No hitting below the belt, either. Queensberry Rules when trying to invade another country and kill each other. Harumph. Harumph.

I understand that the last time India and China had a “Disagreement” it didn’t end well for the Chinese.

I’m sure it was comforting to be able to retreat to Tibet and lick their wounds.

Next thing you know, Biden will call upon the Hindu/Muslim Indians and Confucian/Buddhist Chinese to settle their differences “like good Christians.”

india and china have been fighting on the border for years. Finally someone is taking notce?