Ely Ratner, Assistant Secretary of Defense for Indo-Pacific Security Affairs: “This is really dangerous behavior that I would liken to driving with road rage in a school zone.” 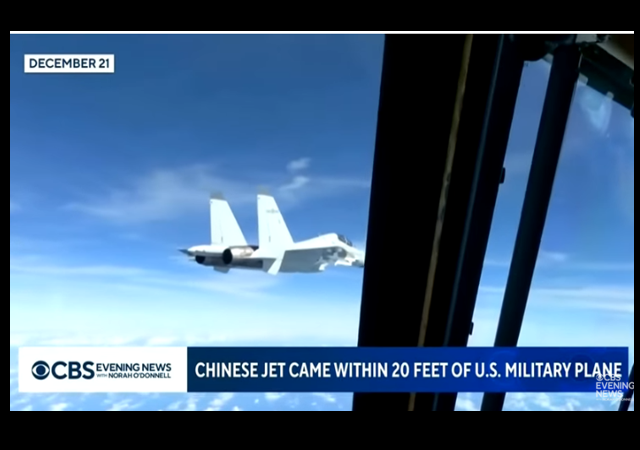 U.S. military officials confirmed that a Chinese military plane came within 20 feet of a U.S. Air Force aircraft in the South China Sea last week and forced it to take evasive maneuvers to avoid a collision in international airspace.

The close encounter followed what the United States has called a recent trend of increasingly dangerous behavior by Chinese military aircraft.

The incident, which involved a Chinese Navy J-11 fighter jet and a U.S. air force RC-135 aircraft, took place on Dec. 21, the U.S. military said in a statement.

“We expect all countries in the Indo-Pacific region to use international airspace safely and in accordance with international law,” it added.

But the Chinese claim the U.S. is distorting the information to the public:

But Tian Junli, spokesman for China’s Southern Theatre Command, said in a statement late on Saturday that the United States had misled the public about the incident near the disputed Paracel Islands in the South China Sea.

He said the U.S. plane violated international law, disregarded repeated warnings by China and made dangerous approaches that threatened the safety of China’s aircraft.

“We solemnly request the U.S. side to restrain the actions of frontline naval and air forces, strictly abide by related international laws and agreements, and prevent accidents in the sea and the air.”

US Indo-Pacific Command reported that the incident occurred on December 21 when the Chinese People’s Liberation Army Navy J-11 flew in front of the USAF’s large reconnaissance plane.

The US plane was “lawfully conducting routine operations over the South China Sea in international airspace,” the statement said. Its pilot was forced to “take evasive manoeuvres to avoid a collision”.

China frequently challenges military aircraft from the US and its allies, especially over the strategically vital South China Sea, which China claims in its entirety. Such behaviour led to a 2001 in-air collision in which a Chinese plane was lost and pilot killed.

Such dangerous incidents persist despite US-China agreements on how to deal with unexpected encounters.

US officials also note that they have seen an upswing in the number of aggressive intercepts of US and allied forces made by the Chinese military.

In June, Canada said Chinese pilots were performing risky intercepts of Canadian planes operating from Japan and Australia said a Chinese fighter jet cut in front of an Australian surveillance aircraft and released chaff that entered its engine.

Ely Ratner, the assistant secretary of defense for Indo-Pacific security affairs, said in July that over the last five years the number of “unsafe” intercepts by Chinese jets had dramatically increased, including dozens of incidents just in 2022.

“This is really dangerous behavior that I would liken to driving with road rage in a school zone,” Ratner said of the intercepts during an event this month. “It is tempting a crisis that could have geopolitical and geoeconomic implications.”

To be fair, we’re collecting Intel on them.

My answer would not be “diplomatic” in nature. But I’m one of those guys that everyone (mistakenly, IMO) calls a warmonger.

Funny, that is one of my pronouns!

Frankly, I don’t know who to believe. Obviously don’t trust the CCP but I also believe the Brandon regime might not be entirely truthful either.

The video may, or may not, prove exactly 20 feet, but no matter the plane was too damned close and the larger aircraft was obviously taking avoiding action. Unless, of course, you think the video was photoshopped.

Don’t know. If China came out with a video, I’d want further evidentiary backup. I accord no special deference to Brandon or his government. Actually, my first instinct is to distrust anything they claim. But frankly, I don’t much care one way or the other. Both regimes do what they want and neither apparently need or depend on popular support.

These are professional airmen. Don’t confuse them with politicians. I say the video is legit.
.

I’ll bypass the whole good rank and file issue and just say the pilots didn’t choose what to release. The Brandon regime did.

You gonna believe what the Chinese say or your lyin’ eyes?
.

When considering what China says about this, one must consider this is the same country that had one of their intercepting aircraft RAM a US EP-3 recon aircraft in international airspace back in 2001.

So in short, China lies. China is *trying* to provoke our sleepy President. They would be perfectly happy to see scattered debris fluttering to the ground so they can claim an unarmed recon aircraft brutally attacked their poor innocent fighter jet. Cutting across the front of the recon aircraft and dumping chaff is literally an attack, and if one of their fighters just *happens* to explode for no apparent reason after doing that…

F– around and find out. US Navy aircraft are seeing a nice boost with the F-35 coming online.

Sounds like the same old s*.
US claims “international airspace,” the Axis of Evil claims “no, we own that area.”

Is there a dispute and does China have red lines?

Was crossing Putin’s red line worth the Ukraine war?

I really think it is time to return to the sanity of the 20th century risk assessment based foreign policy and leave the ideological crusade in the garbage where it belongs. The 21st century has not been a good period for American foreign policy.

Nothing new under the sun.

Consider the agility of the RC-135 and the J-11. The 135 is a tractor trailer semi while the J-11 is a Corvette. The aggressor in this case is clearly the Chinese.

Let them see what happens if the RC-135 is substituted with a F-18 Super Hornet or F-22 Raptor.

Lets see what happens when the RC-135 gets the “Weapons Free” authorization and turns the J-11 into a mini microwave oven.

This is the same nation that gave us Covid-19 but before giving it to the world, bought up the world’s supply of medical masks! Tell me that wasn’t a planned maneuver. They also use hegemony to see what the regime in power does to a provocation. GWB didn’t do anything when the P-3 was forced down and it looks like Slow Joe is doing the same thing. If the chaffe dropped by the CCP plane had caused the RC-135 to crash, how is that different from shooting it down? I say arm the RC-135s and see how that plays out.

Badly. Providing them with escorts is a better plan, but only if they’re allowed to shoot.

I don’t agree at all. Escorts have no range and the radar return would indicate a hostile intent. At that range almost any missile would be sufficient. An AIM-9 heat-seeking missile at that range would be a cinch and arming the RC-135 would not be that big of a deal. Also, just seeing the missiles under the wing might make the Chines pilots a little more respectful. BTW, the EP-3 is an upgraded version of the old P-3 Orion or Electra. It might have a lot of new things on it but it is still an Electra.

The aircraft that was damaged and forced to land on Hainan Island during Bush’s watch was an EP-3 Aries II, not a P-3 Orion. Very different platforms. I flew on that EP-3 many, many times in the same area, though I was long gone from the squadron when that incident happened.

If the video shows the CPA to the RC, I experienced much closer in my day. I’m not saying they shouldn’t be concerned. The thing that would concern me most would be very sudden movements while alongside our aircraft. I’m pretty sure that’s what happened with the 2001 incident. The clown flying the PRC fighter lost the bubble and moved too fast right into the wing of the EP-3. Our pilot couldn’t react fast enough.

One time a fighter from a country which shall remain nameless put his wing over our wing. Then, for good measure, he flew in front of us and “thumped” us. That is, he turned on his afterburners. THAT was excitement I would not want to go through again. The entire aircraft shook.

The program these aircraft fly under is based on the contention that all our operations are done in international airspace and are fully legal and non-threatening. Either putting weapons on the recce birds or even providing armed escorts would be very bad mojo and seen as putting a lie to our contention of peaceful operations in international airspace. Some nations would back off from flying in these areas, but with this PRC aggression, I see that we have to continue operating there…unarmed. But that’s just one man’s opinion.

The incident that really concerns me is the one with the Australian aircraft. Firing chaff into the front of the aircraft is very dangerous. I would love to see any video they might have. I’m not saying it didn’t happen, but I’ve never heard of that happening ever in the time I was part of the program or after. It just sounds hinky to me. But, I’ve been wrong before.

I checked out the reports on the RAAF getting “chaffed” by the PRC fighter. That was a very scary incident. Having flares and chaff fired in close proximity to your aircraft is simply unheard of in this environment. And if there are similar incidents like that, it just shows that the Chinese are sliding back into their old habits of being ultra aggressive and that will spell disaster.

It doesn’t surprise me in the least considering that in many confrontations with the PRC, they are rank bullies. They have no respect for anything. And in the aerial recce program, that can be lethal.

not many pilots have deep experience with formation/aerobatic flying(as with the thunderbirds/angels) and, of course, the tankers could hardly be considered aerobatic

We’re long past the time when the Chinese regime should be treated as a pariah and a threat to world peace. Doing business with them from a corporate standpoint, engaging in utterly emasculated and feckless kowtowing/appeasement from a foreign policy standpoint, is no better than doing the same to National Socialist Germany. This is a manifestly malevolent and evil regime and the free world needs to start confronting it as such.

So China wants us to believe that a recon jet based on a 1950’s era airliner was able to physically threaten a Chlanker?

That’s not the own they think it is.