“Under my leadership, schools will teach reading, writing, math, and science” 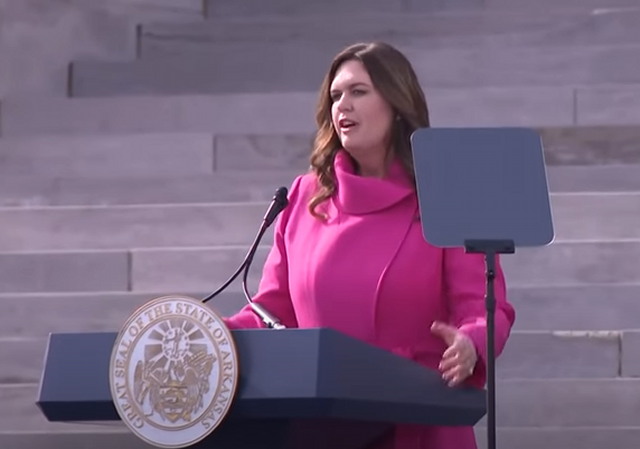 In her new role as the first woman governor of Arkansas, Sarah Huckabee Sanders has wasted no time setting the table for her conservative agenda.

During her first week on the job, she issued a number of executive orders, including the banning of Critical Race Theory in Arkansas schools.

Arkansas Gov. Sarah Huckabee Sanders issued a flurry of executive orders on her first day in office Tuesday, including an immediate statewide freeze on government hiring and a ban on teaching critical race theory in schools.

Sanders, who was sworn in as the first female governor of Arkansas on Tuesday, vowed to make education reform the hallmark of her administration. In her inaugural address, she said schools need to “get back to teaching, reading, writing, math, and science,” and that “the identity that truly matters is the one we all share an identity as children of God and citizens of the United States of America.”

To that end, one of the orders she signed in her first act as governor prohibits “indoctrination and critical race theory in schools.” Critical race theory, or CRT, is a school of legal thought that analyzes how power structures and institutions have negatively impacted racial minorities in America. Concepts that are derivative from CRT, such as “white privilege,” “systemic racism,’ and “implicit bias,” have appeared in classroom lessons around the nation and received fierce pushback from parents and conservative lawmakers.

“As long as I am governor, our schools will focus on the skills our children need to get ahead in the modern world, not brainwashing our children with a left-wing political agenda,” Sanders said, vowing to be “Arkansas’ education governor.”

Sanders also banned use of the ridiculous term ‘Latinx’ on her first day.

Within hours of being sworn in as the new governor of Arkansas, Sarah Huckabee Sanders signed an executive order Tuesday banning the term “Latinx” from official use in the state government.

It is one of the first, if not the first, executive order of its kind, Tabitha Bonilla, an associate professor of human development and social policy at Northwestern University, told NBC News.

It was one of seven orders signed by Sanders, a Republican, right after taking the oath. The other ones focused on prohibiting Arkansas schools from teaching critical race theory, budgeting and spending as well as other government affairs.

Most of these executive orders are consistent with the rhetoric Sanders campaigned on — except for the one banning Latinx, a gender-neutral alternative to Hispanic or Latino.

This woman is eventually going to run for president, and that’s not a bad thing.

Under my leadership, schools will teach reading, writing, math, and science—and our children will learn that the identity that truly matters is the one we all share: our identity as children of God and citizens of the United States of America.

I hope the Arkansas schools will also teach civics. (Not “social studies”)

Everybody always leaves that one out. It was required to get a high school diploma 20 years and and it is still required today. It just doesn’t fit in with readin, ritin, and rithmatics.

readin, ritin, and rithmatic… and a republican form of government.

Here’s to hoping she has success as we see Youngkin getting pushback from schools in Fairfax School district in Virginia.

As a child of the 50s, I never thought I’d see an America that needs to wage internal wars against enemies of the state riddled with Marxist ideologies.

Fresh off of receiving a serious primary challenge, [Soros prosecutor Buta] Biberaj seems to be lashing out at her own community by announcing that her office will no longer be prosecuting certain misdemeanors, such as reckless driving (under 90 mph), hit-and-run (property damage), eluding, trespass, petty larceny, and drunk in public.

Notably, Biberaj PERSONALLY prosecuted misdemeanor cases against GOP Delegate Dave LaRock (trespass), Jon Tigges (for trespass after he refused to leave the June 22, 2021 school board meeting when Scott Ziegler unlawfully called an unlawful assembly), and Scott Smith (for disorderly conduct and obstruction after he was provoked at the June 22, 2021 school board meeting by a left-wing activist who claimed his daughter was lying about being sexually assaulted in a bathroom).

The full story is being reported by Fox5 and includes an interview with Democrat Chairwoman of the Board of Supervisors Phyllis Randall, who makes it crystal clear that she is not supporting Biberaj for re-election and wouldn’t support her even if she ran unopposed.

Most of the politicians with courage are women.

They are often the ones with the balls.

The ladies have ovaries. The gents have testicles. Together, we all live in a green, carbon rich submarine.

Strap on your nads, pull up your big boy / girl / super-intelligent shade of blue / whatever pants, and take a position.

Critical Racists’ Theory is a progressive, anachronistic residual that was taught, impressed, executed in more diversitist times and places. #HateLovesAbortion

“In her new role as the first (woman) female governor of Arkansas,”
Nouns are not adjectives

There it is: “Under my leadership, schools will teach reading, writing, math, and science”

Be “against” the — er — foolishness and shenanigans all you want. BUT, also be *for* something better. It puts the perpetual whiners on the back foot.

Moves from them accusing you “Why are you against this poor, put-upon pile of victims.”

to you “Why are you against readin, writin, n ‘rithmetic?”