One reaction: “If white people did something, it means it was white supremacy!” 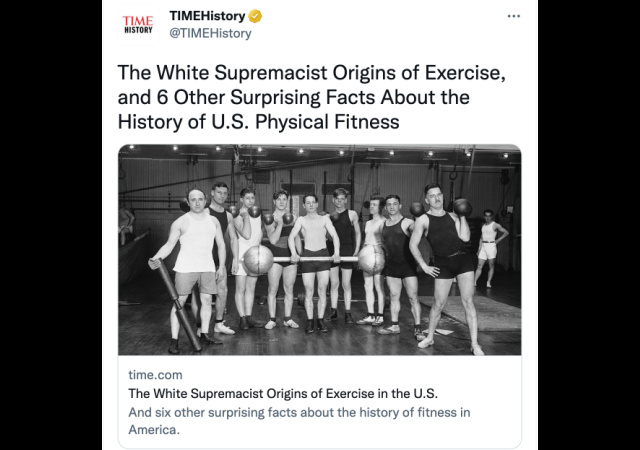 The title of the article: “The White Supremacist Origins of Exercise, and 6 Other Surprising Facts About the History of U.S. Physical Fitness”

Here’s the thing, though. One part of the interview mentions white supremacy. The rest…isn’t bad.

But of course, Time emphasizes white supremacy in the title!

I want to apologize for participating in white supremacy this week by getting back into my workout regimen.

TIME Magazine tries to top The Babylon Bee by arguing the "white supremacist origins of exercise." The ratio on this one is glorious, my friends. https://t.co/JC3ZFecrXl

The White Supremacist Origins of Exercise, and 6 Other Surprising Facts About the History of U.S. Physical Fitnesshttps://t.co/SRwSLRpnCV

I hope Mehlman Petrzela cites this tidbit in her book because she didn’t in the interview:

It was super interesting reading the reflections of fitness enthusiasts in the early 20th century. They said we should get rid of corsets, corsets are an assault on women’s form, and that women should be lifting weights and gaining strength. At first, you feel like this is so progressive.

Then you keep reading, and they’re saying white women should start building up their strength because we need more white babies. They’re writing during an incredible amount of immigration, soon after enslaved people have been emancipated. This is totally part of a white supremacy project. So that was a real “holy crap” moment as a historian, where deep archival research really reveals the contradictions of this moment.

So not only white supremacy but to make women baby machines.

However, Mehlman Petrzela went on to praise exercise and the importance people place on it:

In the 1980s, there’s a huge boom in the fitness industry, connected to this “work hard, play hard” mentality. I was also really moved speaking to gay men who had lived through HIV/AIDS and talked about how they exercised to display that they had a healthy body at a moment when there was so much homophobia. Some gyms became like community centers, sharing medical information, almost like mutual aid societies.

Another big turning point is 9/11. You see a boom in the CrossFit mentality of almost like militarized fitness and girding yourself and your body for a fight—not necessarily, by the way, in the 1950s/1960s way of fighting for the U.S. Army—but more like “you need to know how to perform functional fitness to protect yourself if things go wrong.” At the same time, you see [an emphasis on] wellness, self care and healing and being meditative in an increasingly traumatic and unpredictable world.

He’s really important in terms of shifting who was welcome in gyms. One of the reasons that he ended up starting his own studio is that he went to this very famous studio Gilda Marx, and he absolutely loved aerobics, but he was asked not to come back because women didn’t feel comfortable working out with a man who was singing and so emotive during his workout. And I think he opened a studio where everybody felt welcomed there, including fat people, who felt like they couldn’t step foot into a health club or a studio to take an aerobics class because no one looked like them there.

Today, you see quite a few fat people in the fitness industry, who are operating from a better perspective, which is that your body size does not necessarily dictate your fitness level. We should not presume that because you are fat, that you are not fit or that you want to lose weight. And I think that we probably couldn’t have had that without Richard Simmons.

But since Time stressed white supremacy in the title, everyone gave them the reactions it deserved.

“If white people did something, it means it was white supremacy!”

I knew I was wrong to exercise. Never again. I’m listening and learning. 🙏

Who designed the computers on which they write their articles? Who invented ra equipment to get the power to their house or office to run it? I could go on but you get the idea.

I have to disagree with you on the white superiority thing

For example, dark-colored underpants can be worn many days more than white ones… 🙂

any coloured underpants or none at all or even multiple different colours simultaneously. So what?
Most times, “superiority” is in the mind if the observer. When one wishes to “find” some bias one WILL find the desired bias.

Bill Whittle has a great take on that. Go to Youtube and check out “APPROPRIATE THIS!”….

Speaking of Whittle, I just watched this yesterday. https://www.youtube.com/watch?v=G0T4-XG612Q. Apparently he got Zuckerberged long before it was a thing.

Maintaining a decent level of fitness and a reasonably healthy weight is a lifestyle choice. Eating fatty cakes while sitting on the couch, eyes glued to a screen is also a lifestyle choice. Those choices have very different consequences and far different degrees of difficulty and levels of commitment to achieve.

The fat is beautiful folks want you to accept those unequal choices and very different health outcomes as the same. If they were the same there would be no need for them to proselytize their religion that fat is beautiful. It’s hard to maintain a healthy weight. We should be willing as a society to praise those who can achieve it. That doesn’t mean we shame those who will not just because we acknowledge the difficult accomplishment by those who put in the work and sacrifice to get it done.

It is sad that there appear to be two stereotypes for black women…. overly sexual or overly obese.

As an anecdote I went to my 25th HS reunion this fall. It was a last minute decision by all of us about five weeks out from Homecoming so no time for massive weight loss to skew it. My class is about 60/40 white/black and the percentage of obese whites was far in excess.

All the females who had let themselves go had really let themselves go. Much different from the ten year reunion when everyone was still fit. The females across all races were about 70% still within 15/20 LBS of HS weight with remainder very obese The males had about 90% within ten pounds of their HS weight across all races. The 10% of males that were outside that were very much obese.

A few of us were remarking how it felt like we were getting an uncomfortable preview of who would not make it till the 30 year reunion much less the 40 or 50.

Stereotypes exist because the demographic matches that reality often enough to create the stereotype in the first place.

How many unhealthy people die in rock climbing accidents? 😉

Exercise is “White” is nothing new. IIRC, Duke Univ. eliminated the Student Hiking Club because it was a “White” activity and Racist.

Hmmm. Well every year Hawaiians set aside 1 month for the Makahiki Games. There were categories involving games and contests of skill, track and field, and you guessed it feats of strength. In fact I recently donated to our local museum two weight lifting stones. Virtually weighing the same, these large slightly oval and finely finished rocks were trained with all year, then the participants demonstrated strength for the judges and audience. The rocks were shaped and weighed for the event hundreds of years ago and had been in our family many decades.
Oh….btw…Hawaiians are not white.

I consider them white

Booshwa they’re not.
Have you ever tasted “their” sweetbread?
Portuguese massa sovada, right down the line.
Talk about your cultural appropriation.
And I’m glad they did it… because nobody carries the Portuguese stuff anymore since I left RI, but King’s Hawaiian is available anywhere in the country.

We use the little King’s Hawaiian rolls to make BBQ sliders. Pulled pork with some cole slaw on top…. or a fat slice of smoked brisket! Butter them and toast them on a skillet first.

history lesson: back during the time iof the whaling industry Hawaii became a critical offshore port for reprovision, repair, crew changes, etc. Massive quantities of beef cattle were imported and raised there to provide the salt beef the sailors needed. Where to find cattle people? None in that isand group. Not for beef, anyway. Or pork.
The Portuguese had been doing this in Argentina and Paraguay for decades, many of them shifted their operations to Hawaii, brining their culture with them. This included beef, certain spices and flavourings, their bread, and music. ALL have been well blended into the Hawaiian culture. The Hawaiians did not “appropriate” those things, but the two cultures, being tossed together in that isolated place, simply blended well. The Hawaiian Slack Key style of guitar playing is a wonderful melding of Portuguese playng style and Hawaiian melody and song. Amazing music.

Then again, maybe it’s true.
So what?

It actually wouldn’t surprise me at all if the fashion for fitness and exercise did originate with white supremacists. Think of the equivalent in Germany in the 1920s and ’30s, the fad for fitness, nudism, nature and the outdoors, etc., which was very tied in with the nazi movement.

The need to emphasize fitness may be a just another unintended consequence of civilization. After all, when you have to outrun the lions, fitness is just another survival mechanism. Nature selects out the unfit. You don’t have to actually work at it.

So you have two cultures. One which continues to try and outrun lions, and the other which moved north and started to invent and build things, and then decided to throw and kick sperical objects in their now “spare” time.

I always wondered how Frosted Flakes were made.

Has TIME finally conceded that it’s a joke? Is it trying to compete with the Babylon Bee?

The Bee points out that the author never actually says WHERE she came across the idea that white women were needed to become baby factories… resulting in the Bee actually performing more professional journalism than Time.

The Bee almost always does more honest journalistic effort than any of the MSM.

So, Billy Blanks must be an Uncle Tom.

Hello, McFlys…Whites have been a majority since day one.
White privilige, White Supremecy…so what -> majority rules !
2020 Census – whites = 58.7% of the population. Include hispanic whites(whatever the heck that is) and it’s 61.6%.
Majority rules. If the rules suck, attack the rules.

Go back a century and exercise was almost exclusively an upper and upper middle-class activity – that is, only those who paid others to do the physical labor had any need for “exercise” as a separate activity. It was a class thing, not a white thing.

Most men, white or black, were in j0bs requiring hard labor, and more likely to die from overwork than from under-exercising. Most women, white or black, did less physical labor than their men but worked hard enough at housekeeping that they had no need for more exercise.

Yeah, but before it became an upper class thing it very much wasn’t. People who could afford not to do physical labor didn’t, and wouldn’t dream of doing so. Rich people were fat, and proud of it. Then someone came up with the idea that they should exercise and try to be slim, and that may very well have been tied up with ideas of white supremacy. It was in Germany, and Germany had a lot of influence on other countries in those days. So this author’s contention might be true, but if so it’s still nothing but a historical curiosity.