“I’m sorry that’s happening to you. Best of luck.” 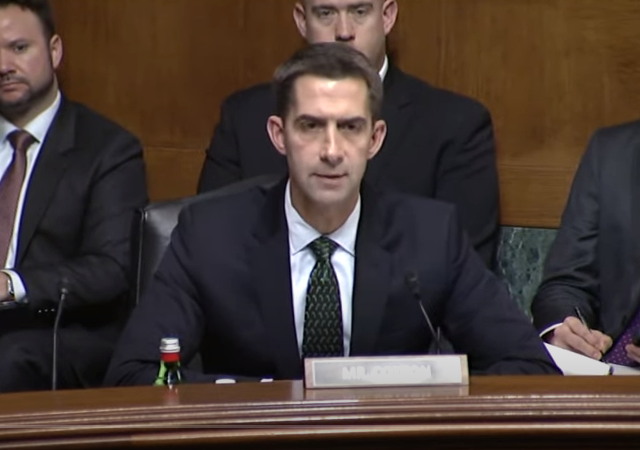 Senator Tom Cotton of Arkansas just gave Republicans a lesson in how to deal with woke corporations. Kroger is trying to merge with another grocery store chain, and the Democrats aren’t playing ball, so Kroger wants the usually business-supporting GOP to help them out.

However, Kroger has embraced the left’s social justice agenda and was even sued by employees who objected to wearing pride rainbows.

Kroger fired two former employees from an Arkansas location in 2019 after they refused to wear logos they believed represented the rainbow Pride Flag. While Kroger said the aprons with the rainbow-colored heart were not indicative of support for the LGBTQ community, and that the two employees were not fired for their religious belief, the mega-chain was ordered to pay $180,000 to settle the suit.

Sen. Tom Cotton scolded “woke” CEOs last week who expect Republicans to come to their defense when Democrats want to regulate their industries, telling them, “Best of luck.”

Cotton, R-Ark., was discussing the merger between the Kroger and Albertsons grocery chains when he railed against companies inserting themselves in cultural issues. He likened it to tech companies asking for GOP protection from overregulation by Democrats.

“I’ve cautioned them for years that if they silence conservatives and center-right voters… if they discriminate against them in their company, they probably shouldn’t come and ask Republican senators to carry the water for them whenever our Democratic friends want to regulate them or block their mergers,” he said during a Nov. 29 Senate Judiciary Committee hearing on the proposed merger between the grocery giants.

"I'm sorry that's happening to you. Best of luck."

Ace of Spades has more background on what happened to employees at Kroger and says, of Cotton’s comments, that every Republican should memorize this answer.

Get woke; go broke. Or at least don’t get your way because you have sucked up to the Dem socialists, who, as always, got what they want and can now cast you aside.

Many of the woke commercials on tv will be found to be counterproductive by the over-emphasis of minorites in every possible situation that can be imagined.

TY Mike… politicians are really good at keeping their emotions in check.. It is part of their job.. Tom was right on the edge.. you could really see how pissed he was… It was a sight… Good for him.

Absolutely this response by SEN Cotton is the way forward. Corporations can either be neutral or become activists. Many corporations have chosen to become ideological and engage in creating the hyper partisan environment we live in.

We don’t need them to be on ‘our’ side but expecting these corporations to remain a neutral posture at a minimum when asking for our help seems entirely reasonable. As they sow they shall they reap. That is definitely overdue.

Woke CEO don’t need Cotton or other like-minded GOP reps and senators when they have the Dems and GOPe to run to. Right now, Tillis is exchanging amnesty for 2 million illegals for a whopping 1 year extension of title 42 during a lame duck Congress.

Dems and the gals in Bitch’s harem are more than willing to help a woke CEO in need.

That’ll learn ’em. I wonder how much less effective he’ll be in the new minority? But by all means, keep up the one-liners. Don’t learn how the democrats harvest votes in order to be competitive in national elections.

Since Cotton represents Arkansas in the US Senate meets observe the composition of office holders in Arkansas.

That seems to indicate that Arkansas r have their shit wired pretty damn tight concerning elections. That doesn’t preclude the future campaigns from adopting strategies to compete for ballots and early voting in the States where it is legal. Nor does it preclude citizens challenging the lack of voter registration list maintenance that is a requirement not an option.

We should actually go farther and support the Democrats in this case.

Why on Earth would we want a woke corporation to increase its power? Not only should we not be helpful to them they need to learn that if they target the Republican Voter not only will the Republican Party not help them get increased power we will give them a kick ourselves.

Mine is an evil laugh…