San Francisco Board of Supervisors reversed course after they approved the ordinance in an 8-3 vote on Nov. 29. 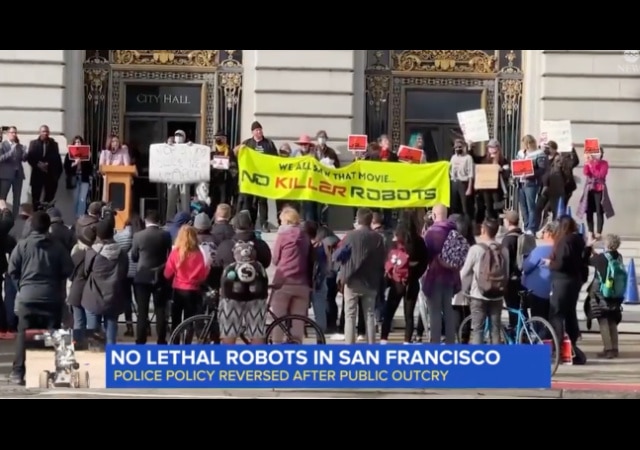 In late November, we shared a report that the San Francisco Police Department proposed a new policy to give robots the license to kill.

Thankfully, we can now share that the San Francisco supervisors voted to cancel the plans for the “killer police robots.” Maybe they watched the movie(s) about this very thing.

In a complete reversal, the Board of Supervisors just voted for a military equipment policy that bans police from using robots to kill. Thank you to all the residents and civil rights advocates who made their voices heard!

“The news comes a day after community groups protested outside San Francisco’s City Hall condemning the ordinance, which the San Francisco Board of Supervisors approved in an 8-3 vote on Nov. 29.”

#JusticeLeagueCA The people of SF have spoken loud and clear: There is no place for killer police robots in our city. We will continue to push back against increased militarization and surveillance technologies in the name of “security” and “safety”.https://t.co/4ZGlocKuf5

Good news about a problem that never needed to be created in the first place: https://t.co/gbPanvrGQt

Gotta love those who always react before they read.

Plan to use killer robots to kill has been killed before they had a chance to kill anybody.

Perhaps they can use the funds to fund robots to dispense new needles to drug addicts.

Likely, they couldn’t program all the pronoun fluidity into the machines…

They need to prove themselves first by demonstrating robots that can clean shit and needles off the sidewalks competently. Then we’ll talk.

If any place in the world is in desperate need of robot killing machines, its San Francisco.

I think they should try again, but with better messaging.

Its not a machine whose purpose is to kill robots.

Misplaced hyphens can be as bad as misplaced apostrophes.

I was confused.. why would anyone make a machine to kill robots?? Were they out of control, and threatening San Franciscans?

The robots are love. #NoJudgment #NoLabels

That said, election to abortion. All’s fair in lust and abortion, in peace and war.

Dang, your posts can be hard to read with all the punctuations thrown in, but this time I can agree.
.

Ignorance all the way down. This is not to say I support remote controlled death machines, but these “robots” are not in any way autonomous. They are remotely controlled drones. This issue will not go away. In fact these machines have already be used to legally kill a suspect in the US. Some of you may recall an incident in Dallas over 6 years ago involving one of these “robots”, an active shooter, and a bomb strapped to said robot.

This isn’t Robocop. This is someone sitting behind a computer screen with a joystick.

We’re safe as long as they don’t use VISTA.