“Cooper began teaching at the university in 2012, and she has been paid a six-figure salary each year from 2018 onward.” 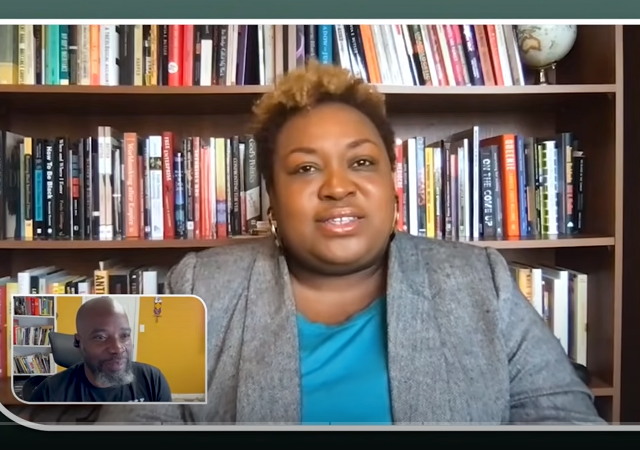 It’s amazing that this person is employed in higher education.

‘Take these m—–f—–s out’: Rutgers prof rails against white people while defending CRT

She also told writer Michael Harriot, “I think that white people are committed to being villains in the aggregate.”

The event took place on Sept. 21 as part of The Root Institute, a conference hosted by an African American-focused online publication called The Root. President Biden delivered this year’s opening address.

Cooper is an associate professor of Women’s and Gender Studies and Africana Studies at Rutgers University. A document obtained by Campus Reform via public records request reveals that Cooper will earn at least $114,248.95 from Rutgers this year.

Cooper began teaching at the university in 2012, and she has been paid a six-figure salary each year from 2018 onward. Cooper did not respond to request for comment, though an auto-reply email stated that she is not regularly checking email because she is on sabbatical leave…

When asked if white people would ever release the power they currently hold, Cooper answered, “The thing I want to say to you is, ‘We gotta take these m—–f—–s out,’ but like, we can’t say that, right? I don’t believe in a project of violence, I truly don’t,” because “our souls suffer from that.”

Rutgers professor: "White people are committed to being villains," "We gotta take these MF'ers out."

This professor spewed hatred on a YouTube video with @TheRoot. pic.twitter.com/QrGsv77CCC

The only thing this overweight trash talking idiot “takes out” is a buffet line at Golden Corral.

“It’s amazing that this person is employed in higher education.”

Doesn’t amaze me at n the slightest. lol k at the courses she teaches.

Anything (and I emphasize the word “thing”) that teaches a “-studies” course is just a waste of space that would be better occupied by a hard science teacher or a vacuum.

This is what Affirmative Action has wrought.

Don’t donate. Don’t send your children to Rutgers. And tell everyone you know not to go there .

Unfortunately, this garbage (the teacher and the courses) are prevalent at most universities and colleges now, and are usually part of the core program, so students are forced to take them.

Perhaps someone ought to consider doing something mostly peaceful.
“But like, we can’t say that, right?”

Her left anterior descending is likely to take her out first.

If Stacey the Hutt had a sister.

Indeed. She wants to pack white people in carbonite.

Diabeetus is gonna take out those trunks you call legs, especially as your fat ass chokes off their blood supply at your desk day in and day out.

This poor excuse for a human would not have been able to graduate from my Catholic college prep high school. She exempifies the degradation of the university system in Western society. ROTTEN.

So how does she(?) feel about the black abortion rate?

Is it only my white fragility that makes me want to laugh in their faces?