The new rule would prevent migrants from claiming asylum if they did not seek out protections in other countries. 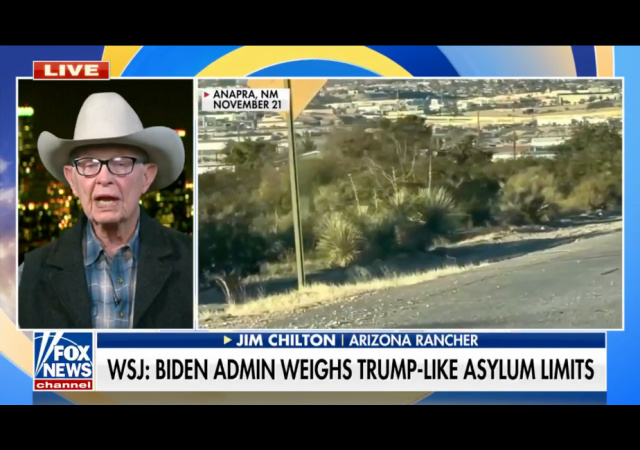 President Joe Biden’s administration might use some of former President Donald Trump’s immigration policies to limit those who can claim asylum at the border, according to The Wall Street Journal and other outlets.

The new rule would prevent migrants from claiming asylum if they did not seek out protections in other countries.

The idea blossomed after a judge ruled an end to Title 42.

The ban under discussion would prevent migrants from winning asylum in the U.S. if they moved through another country, such as Mexico, on the way and didn’t first apply for asylum in that country. The policy would be issued so it takes effect in conjunction with the end of Title 42.

The Trump administration instituted a similar policy in 2019, known as the transit ban. A federal appeals court in San Francisco ruled in the final months of the administration that it violated asylum laws set by Congress. The suit was set to reach the Supreme Court, but the Biden administration ended the case by dropping the policy when Mr. Biden took office.

Officials are also working on an online portal to allow asylum seekers from more countries to apply for asylum before coming to the U.S., with the possibility of receiving travel documents to fly to the country if they clear an initial screening, the people said.

It is possible that the two proposals could be combined, the people said. Those ineligible for asylum at the border could be eligible instead to apply through the online portal, though such a process would likely be capped or limited to applicants from one country to start, they said.

A DHS spokesperson said these reports “are inaccurate,” and no one has made any decisions on a policy change.

The Border Patrol and border states have already stressed over a possible migrant surge due to the end of Title 42.

But even with Title 42 in place, we’ve seen every month break a record, whether it’s encounters, “gotaways,” abandoned children, or drugs. We’ve even seen a spike in abandoned dogs at the border.

The Democrats have had the trifecta in DC since January 2021, and they haven’t done anything to fix our immigration system.

But I think that was the plan all along because now, with the Republicans gaining control of the House in January, Senate Majority Leader Chuck Schumer is pushing amnesty.

I don’t really follow the logic of not requiring asylum seekers to apply for asylum in Nations along the way. At a minimum to apply at a US Embassy or Consulate in those Nations and remain until their claim is granted or rejected.

Obviously there is no defensible or logical argument to support the goal of mass migration without regard for National Borders or National Sovereignty. If someone is in Suckistan they would likely prefer to be in the US given the option. We aren’t under any obligation to allow everyone who would rather be in the USA to come here.

Where is that border wall we were promised in 2016?

Who knows. You might want to ask the democrats in Congress that fought tooth & nail to prevent any funding for a wall to be built on our southern border what happened to that border wall.

We could ask why DJT didn’t veto every spending bill until Congress capitulated. It was his campaign promise and his responsibility to do everything possible to deliver on that promise.

They are seeking Economic Asylum.

Let’s face it. 6 Billion people on the planet want to come to the USA for a better life. We cannot take them all.

The entire asylum application process is being grossly and brazenly abused and exploited, by Dumb-o-crats and their well-oiled immigration attorney cohort. No Dumb-o-crat is capable of reforming this abuse.

What was originally intended as a mechanism for entry based upon ethnic or religious persecution has now become an absurdly overbroad catch-all for any alien fleeing an impoverished nation.

Have *any* immigrants been turned back in the last two years? They recite the talking points the cartels give them, fill in some papers, and get a free ride to where relatives take over. Years and years later, they *might* get an amnesty hearing which 90% of them just don’t show up for “Oh, scheduling issue. Please reschedule.” or they’ve already vanished into US illegal culture with faked ID. How much longer will it be until the Dems in this country not only propose a full amnesty for anybody within the borders but toss in a few hundred thou in taxpayer dollars as a bonus?

How much longer will it be until the Dems in this country not only propose a full amnesty for anybody within the borders but toss in a few hundred thou in taxpayer dollars as a bonus?

Schumer already has proposed amnesty for the 11 millions illegal aliens that have already entered the country. He wants them because he claims that U.S. citizens aren’t reproducing as much as they need to be to maintain the population.

They’ve been claiming 11 million illegals for the past 20 years. I’m pretty sure that there are a few more by now, given that we’re getting around a million or so fresh ones every year.

My surprise is that Joe is reaching into Donnie’s bag of tricks. That must mean that for some reason he needs something that works, for once.

Brandon actually trying to slow down the invasion — the mind reels.