Progressive Group Begs Joe Biden Not to Run in 2024

Progressive Group Begs Joe Biden Not to Run in 2024

“No amount of bravado from the White House can change the severe vulnerabilities that a Biden 2024 campaign would face.” 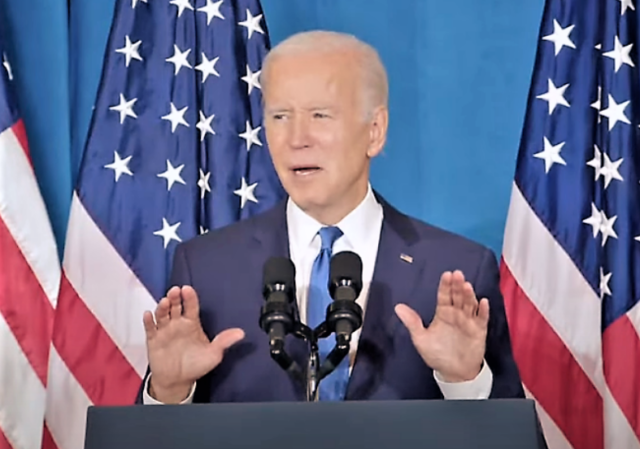 Lots of people are predicting that Biden won’t run again in 2024, even though his team is insisting he will. One progressive group called RootsAction is taking Biden at his word, but asking him not to do it.

They’re arguing that Biden is too old and too unpopular to win, and they’re absolutely terrified that a Republican could beat him.

Left-Wing Group Pleads With Biden to Not Run Again In 2024: ‘Don’t Run Joe’

A left-wing group is making headlines for pleading with President Joe Biden not to run again for a second term in 2024.

Although the group, which has defined itself as a “progressive group that helped defeat Trump,” is not advocating for a Republican in the White House, they fear if Biden ran again, Americans wouldn’t vote for him.

“With his low popularity, it’s too much of a gamble,” another voter said.

The ad will also be run on liberal networks and broadcasts such as Jimmy Kimmel Live.

It's not the time for half measures. There's no room to compromise when so much is on the line. #DontRunJoe pic.twitter.com/rAMAJIyOYH

It sounds like old Joe has outlasted his usefulness for the left.

The Hill has more on this:

RootsAction launched the “Don’t Run Joe” campaign in November, one day after the midterm elections and after first announcing the effort in July.

Biden, who recently celebrated his 80th birthday, has not announced his 2024 candidacy but has said he intends to run for reelection. The president last month teased that an announcement could come early next year.

About 70 percent of Americans don’t want Biden to seek reelection, according to a new poll, with many largely citing concerns over his age.

Jeff Cohen, the co-founder of RootsAction, said the campaign is “just getting started” and the advertisements would soon run in more states.

The group’s national director, Norman Solomon, said, “Biden should heed the voters of his party rather than simply declaring watch me run for re-election.”

“His public approval ratings remain dismal, as they have been all year,” Solomon said in a statement. “No amount of bravado from the White House can change the severe vulnerabilities that a Biden 2024 campaign would face.”

Will anyone be surprised if Biden runs again? He thinks he won the midterms and that his policies are popular.

In other words, he’s clueless.

If Biden decides to run, more accurately if Jill Biden decides he should, then there’s not anything the d/prog can realistically do to prevent it. They can’t exactly say Joe is too old, too feeble, too scatter brained without undermining him while in office. They will be forced to either support an incumbent or reject him in the primary.

They will be forced to either support an incumbent or reject him in the primary.

They will reject Biden at the primary level. I have no idea who the democrat party will nominate but they simply cannot allow Biden to run. He’s got too much baggage for them to realistically deal with. There’s no way to put a positive spin on the complete disaster the Biden regime has become. And fake Dr. Jill will have exactly zero to say about it. Joe, Jill and the rest of the Biden regime will be unceremoniously put out to pasture with the hopes that everyone just forgets about the whole sordid mess they made of it all.

Democrat voters will reject him in the primary…

But what will Democrat ballots do?

You’re talking like the DNC has any kind of integrity. They don’t. If they think his handlers will be more effective than other options if he remains in office, they wil back him and put “the most extensive and inclusive voter fraud organization in the history of American politics” to work to keep him where he is.

The only problem I see is that the R campaign video of his gaffs would be hours long.

BTW I don’t think of him as POTUS… he is an avi, nothing more.

What difference does the Pu pet make to the Puppeteers?
For that exact reason do expect Mooch to run, they will love her.

And moot point, he is fading quickly and can’t imagine him lasting 2 more years

Dictator Dementia doesn’t even live in the real world. Do You think this is going to get his attention?

Sadly, unpopularity by itself isn’t enough to defeat a Democrat incumbent anymore. People want assurance the challenger is worth supporting.

Let us take a look at the three most important reasons why Joe has decided to run:

This is why I believe that the Democrats will give him a choice to drop out of 24 because of health or Democrats suddenly discover all the evidence about Joe/Hunter Ukraine/China and either let the Republicans impeach him or they take him out in the primaries.

Democrats certainly can pull the plug whenever they want giving Sundowner a offer he can’t refuse. But he is accomplishing al, their goals so see no reason to do that.
And accomplishing means not stopping the Puppeteers

Look at the thinking: winning isn’t about principles, policies or personnel. There’s a mission, and political power is a way to do it.

They should be talking to soros, gates and some of the other puppeteers about who to run. They way they cheat in elections they might as well run pedo joe.

The “let’s eat grandma” catchphrase is clever.
“Don’t run, Joe!” to appears to be to Joe, as if he will ever listen.
“Don’t run Joe” is actually to the puppetmasters, the real message.