“My bags are packed. I’m ready to go home. I just need an airplane to come and get me.” 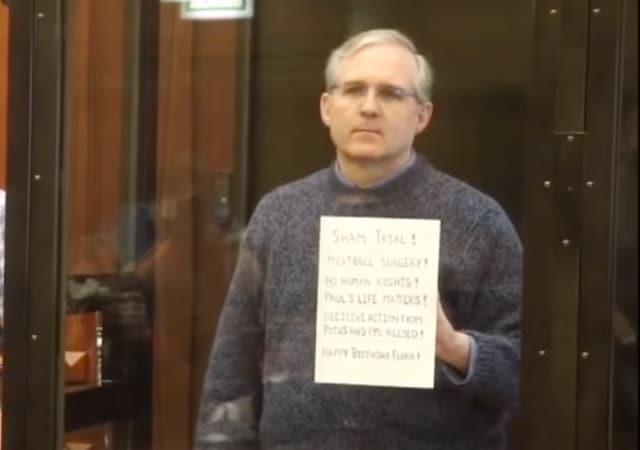 Marine Paul Whelan has been in a Russian prison for four years. Russia accused Whelan of spying in 2018 and convicted him in 2020.

Whelan and the United States government claim the charges are not true.

This morning, President Joe Biden gloated with the successful prisoner swap for WNBA player Brittney Griner for an arms dealer known as the “Merchant of Death.”

This is the second time Biden left behind Whelan.

“I am greatly disappointed that more has not been done to secure my release, especially as the four year anniversary of my arrest is coming up. I was arrested for a crime that never occurred,” he said in an exclusive phone call from the penal colony where is being held in a remote part of Russia. “I don’t understand why I’m still sitting here.”

Whelan said he was happy that Griner was released but told CNN he “was led to believe that things were moving in the right direction, and that the governments were negotiating and that something would happen fairly soon.”

When asked if he was surprised not to have been included in the swap for Russian arms dealer Viktor Bout, he told CNN he was.

Whelan, former marine who is a US, Irish, British and Canadian citizen, was detained at a Moscow hotel in December 2018 by Russian authorities who alleged he was involved in an intelligence operation. He was convicted and sentenced in June 2020 to 16 years in prison in a trial US officials denounced as unfair.

US officials have indicated that the Russians refused to release him despite US efforts at negotiations, and Whelan said he was told that because the Russians have accused him of being a spy, “they’ve put me at a level higher than what they did with Trevor (Reed) and Brittney.”

Whelan wants Biden to know he’s in a “precarious situation that needs to be resolved quickly.”

“My bags are packed. I’m ready to go home. I just need an airplane to come and get me,” he said.

Whelan said he would like to speak to Biden directly, noting he had spoken to an administration official earlier in the day about the situation, but “I think that message really needs to go to people like the president so they understand personally what I’m dealing with and what we deal with in these foreign prisons and under these circumstances.”

“It’s quite obvious that I’m being held hostage,” he said.

Whelan expressed concern that he might not make it back to the United States, noting he has 12 years left in his prison sentence.

Biden and others provided nothing but empty words and the usual talking points to the Whelan family this morning:

Biden acknowledged the Whelan family on Thursday, saying that the prisoner swap for Griner was “not a choice of which American to bring home.”

“Sadly, for totally illegitimate reasons, Russia is treating Paul’s case differently than Brittney’s,” Biden said. “And while we have not yet succeeded in securing Paul’s release, we are not giving up. We will never give up.”

National Security Council coordinator for strategic communications John Kirby said later on Thursday that the US is “not back to square one” in its negotiations for Whelan’s release.

“We have been in active discussions with the Russians on Mr. Whelan’s case for a very, very long time. Certainly those conversations accelerated in recent months and I can assure you that we are going to stay at those active discussions going forward,” Whelan told CNN’s Kate Bolduan.

Whelan has no idea why Russia treats him differently than other prisoners, including another charged and convicted of espionage:

He said he was aware that he was considered in a different category than Griner – “the Russians have always said so.”

“They’ve always considered me to be at a higher level than other criminals of my sort and for whatever reason, I’m treated differently than another individual here from a Western country that’s also on a charge of espionage. So even though we’re both here for espionage, I’m treated much differently than he is, and my treatment is also much different than others held for espionage at other prisons,” Whelan said.

As soon as CNN makes the segment sharable, I will post it.

Here is an interview with Whelan’s brother David.

What rungs do you hit on the intersectionality ladder?

Brittney has a great outside shot and is a league leader in rebounds.
Whelan is a mid-third rounder at best.

Straight up trade: An outside shooter for a rim protector.

Whelan, former marine who is a US, Irish, British and Canadian citizen, was detained at a Moscow hotel in December 2018 by Russian authorities who alleged he was involved in an intelligence operation

Born in Canada, so I guess that gets him UK and Canadian citizenship. Apparently got Irish citizenship through grandparents, which is common (I’ve got the paperwork to do it, but holding off until I retire). That said, unclear if he held all of that while he was in the military or if it was a “genealogy thing” as his family stated. You’re generally disqualified from any sort of government security clearance if you have multiple passports. Decisions haven’t been consistent, however.

Whelan is a Veteran and not the left’s ideal target market of transgender, lesbian, pot user that hates the USA.

Bad deal Biden. The US does not need Griner or her ilk.

Randi Weingarten 🇺🇦🇺🇸💪🏿👩‍🎓
@rweingarten
·
Follow
What a great relief!!! Extraordinary news, a basketball star, but also a gay, black woman is released. And yes of course we want other prisoners like Paul Whelan released.
https://twitter.com/EsotericCD/status/1600849675846062083

He’s a white guy. As long as the radical racist “anti-racists” are in charge, he’s going to stay right where he is.

He is a white, male, heterosexual as far as is known, and has served this country. That is 4 strikes against him as far as the current regime is concerned.

Just in passing, yesterday and the day before we were having a discussion both at another blog, and in the online version of the PROCEEDINGS of the US Naval Institute [based at the Naval Academy] about why the armed forces are having problems with both recruiting and retention. It is the contention of the Commandant of the Marine Corps that it is all Covid and not the cultural changes in the country. The Commandant was not coming off well in the discussion.

But Afghanistan was a success!!! Ukraine is a success… (as Zelensky has done what Biden only dreams of… banning opposition parties, imprisoning opponents, raiding seminaries’ and convents, and banning the Ukrainian Orthodox Church.)

Nobody in their right mind would join right now unless you want to warfight your fellow citizens… which is not such a far fetched possibility. Why wouldn’t Antifa and BLM hard core not want to get the training and chance to use it?

We had the chips to get the athlete but not the Marine?

Does The Sniffer In Chief’s administration realize they just declared that a US Marine held on disputed espionage charges is worth more than a professional athlete held on undisputed drug charges?

Doubtless the outrage mob will descend on this relative devaluing in …3, …2, …1 …

Is there any way that we could trade Biden for Whelan?

My heart goes out to Paul Whelan, letting a American h8r trade is horrible instead of a serviceman.
Suspect Bout since the Russians traded for him he isn’t a Russian criminal. They didn’t trade to keep him in jail

One one hand we are in a combination proxy and direct covert war with Putin and yet Biden is basement bargaining with Russia. Getting the LGBQwerty+++ combo/black vote must be really valuable. FJoe Biden knows his bargaining for a Marine won’t buy him that many extra votes.

She better be MVP …. take that back… a real MVP for the WNBA (whoopie) this next year. Do I really care????

Biden can’t get anything right.

The dotard-marionette is the proverbial anti-Midas — everything that he touches turns to excrement.

I should add that the chance he actually was an American spy isn’t a bad one; which would mean this man was captured in Russia as a hero helping this country in a very dangerous job.

He should have been the top priority not left behind.

The disgraced former Marine was thrown out of the military with a Bad Conduct Discharge for trying to steal money, over $10k I think, while deployed. I’d argue he dislikes this country more than that basketball player if he was willing to spit on the uniform like that.
She broke the laws of a foreign country, he disgraced himself, the Marines and America.
He no longer deserves to use the title of Marine.

The Commander in Chief left Americans behind in Afghanistan AND then lied about it. You have to ask yourself “what wouldn’t he do?”.

The swap of a lesbian dope smoker for a weapons smuggler makes sense only for Biden and hiis minions who know that the LGBT movement is a huge part of the Democrats’ base while as we saw in Afganistan American soldiers,and their equipment are expendable and the war on terror is Islamaphobic in nature

This prisoner swap reminds me very much of the saying, what would Obama do. After all, Biden is simply following in Obama’s footsteps. Remember Obama traded 5 Gitmo terrorist for an American deserter Bowe Bergdahl. Both swaps were a bad tradeoff.

Why would anyone be surprised the old skid mark in the Oval Office chose Griner over Whelan? Hating this country made her a shoo-in.

If Whelan had any sense, he would start honing his skills in the Russian language, learn a skill useful for working in Russia and wait out the rest of his Russian sentence. He’s safer there than anywhere here now or in the next few years.