“No school official can force a teacher to set her religious beliefs aside in order to keep her job.” 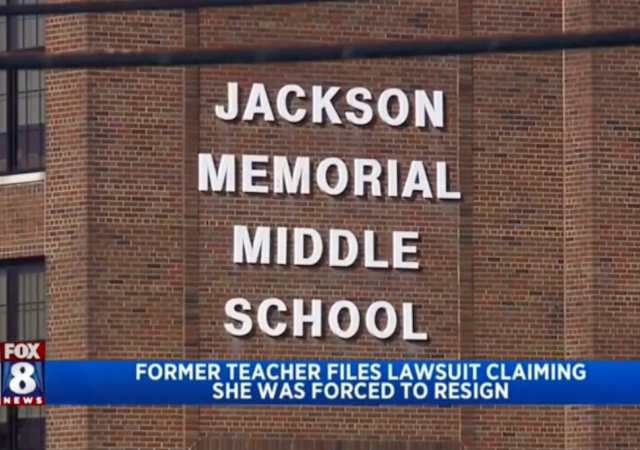 In a lawsuit, a middle school teacher in Ohio claims she lost her job when she refused to use students’ preferred pronouns based on her religious beliefs.

Aside from the legal aspects of this story, one has to wonder why middle school students have preferred pronouns.

A middle school teacher in Ohio alleges in a lawsuit against her former employer that she was forced to resign after refusing to refer to students by their preferred pronouns.

The lawsuit, filed in federal court on behalf of former Jackson Memorial Middle School teacher Vivian Geraghty by the Alliance Defending Freedom, states that her school district required teachers to participate in the “social transition” of students in her class who have “‘transitioned’ to a gender that was inconsistent with their sex.” Jackson Memorial Middle School is in Massillon, Ohio.

Geraghty, however, refused to participate in the policy because of her Christian religious beliefs. The lawsuit alleges that the school “ejected her” within two hours of Geraghty telling principal Kacy Carter about her reservations to the policy.

“But as soon as Defendants found out that Ms. Geraghty had a religious basis for resisting their attempt to implement an orthodoxy, they forced her to resign. Within two hours of being notified that Ms. Geraghty had reservations about their approach to the issue on Aug. 26, without there ever being any complaint from a student or disruption of any school services, Defendants ejected her from the school,” the lawsuit states.

This is from their press release on the case:

“No school official can force a teacher to set her religious beliefs aside in order to keep her job. The school tried to force Vivian to recite as true the school’s viewpoint on issues that go to the foundation of morality and human identity, like what makes us male or female, by ordering her to personally participate in the social transition of her students…

The controversy began when two students asked Geraghty to participate in their social transition. This included using new names to reflect a new asserted gender identity for both students and using pronouns inconsistent with one student’s sex. The school counselor e-mailed Geraghty and several other teachers with instructions to participate in the students’ social transition. In response, Geraghty approached the principal with the hope of reaching a solution that would allow her to continue doing what she had always done: teach her class without personally affirming as true things that she believes are false and harmful.

The principal and his superior, the school district’s director of curriculum, instruction, and assessment, told Geraghty that “she would be required to put her beliefs aside as a public servant,” that her unwillingness to participate in a social transition in violation of her faith amounted to insubordination, and that continuing to teach consistent with her beliefs would “not work in a district like Jackson.” Further, the officials told Geraghty that, if she would not participate in the students’ social transitions, she must resign immediately.

Geraghty said that she believed forcing her to resign violated her rights under the First Amendment, but the principal reiterated his stance that, as a public servant, she must “set [her] religious convictions aside,” and that if she was unable to do so, she had no choice but to resign. The director of curriculum, instruction, and assessment then handed Geraghty a laptop and ordered her to draft her letter of resignation in the adjoining room for immediate submission.

Have you noticed that it’s almost always people on the right who are told that they need to ‘put aside’ their beliefs for the greater good?

These gender warrior school administrators are stark raving idiots who need to be exposed, ridiculed, and fought tooth and nail. It’s maddening that allegedly educated, supposedly sane, rational people in professional roles are engaging in this absolute idiocy.

“ These gender warrior school administrators are stark raving idiots who need to be exposed, ridiculed, and fought tooth and nail.”

You misspelled “launched from a cannon into space.”

Both public schools and universities are mostly beyond salvage.

Another solution is to empty the government schools.

here is my puzzlement – one does not generally use pronouns in front of the person one is discussing. Unless one uses “you” in which case that is gender neutral, and I have never heard anyone complain about “you/yours” as a pronoun. I guess I could demand “thee/thou” but that would just be fun because no one knows how to properly conjugate the 2nd person singular/familiar in English anymore. But I digress….

so basically people asking you to us other pronouns are asking you to do so when they are not around, SO HOW DO THEY KNOW YOU ARE MISGENDERING THEM?!?!?!?!?

You are right in some contexts but wrong in others.

You can be in a large group talking about someone in the group while not directly addressing them.

Silly me! When I was in school, pronouns were taught in English class. Science was about science. Boys were boys, girls were girls. Today you need a program to know the players. Still, reality can only be defied to a point.

Please use pupils’. These ignoramuses are not students.

What’s your point in making the distinction?

Still waiting for your take on Tolstoy’s novels.

Orwell was a prophet.
.

It shouldn’t depend on religious beliefs.

“Use these pronouns when you’re talking about me behind my back!”

This isn’t going to be a popular take here, but if you are a muslim who refuses to handle pork products, you obviously cannot work as a cashier in a grocery store that sells bacon. If you don’t believe in same same-sex marriage, then you obviously cannot work as a clerk in a county courthouse in a state where issuing marriage licenses is a part of your job. This is just another brick in that same wall – if you are not willing to participate in student fluid-gender fantasies, you can obviously no longer work as a teacher in a school that supports it. Time to look for a new job in a saner industry.